The story of the squirrels

Home » Family » The story of the squirrels

I’m no expert on wildlife, but I’ve always quite enjoyed seeing different birds and animals in our garden and the surrounding area. And, over the course of the year, with literally nothing else to do, we’ve all become a bit obsessed with the local wildlife.

There’s the blue tits which take bits of Herbert’s fur for their nests, the two friendly robins who sat patiently watching my husband as he dug up the front garden – then dived straight in for fresh worms. Alongside the little country lane where we walk every day there’s usually three deer in the fields – one on one side of the road and two on the other. There are various birds of prey. Sometimes, there is even an owl, which has got the whole village talking. Often when we’re out in the evening, someone will say:

“Have you seen the owl?” 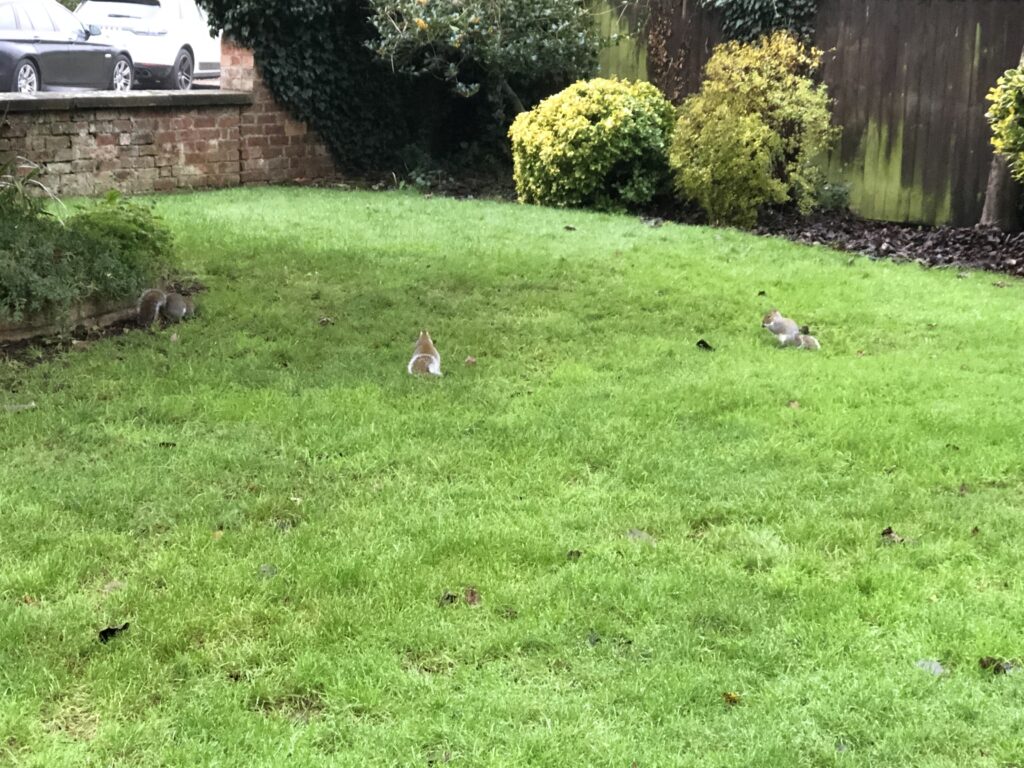 The original three squirrels in December 2020

But lately, there has mainly been squirrels. During the winter, there were three squirrels which appeared to have taken up permanent residence on our front garden. Although they don’t hibernate, squirrels often sleep for a few days at a time in winter, but not these guys. They were on our front lawn 24/7. After a month or so, three became two. Those squirrels were there every time we went out of the front door right into April. It seemed they had an almost infinite number of nuts buried in our grass. 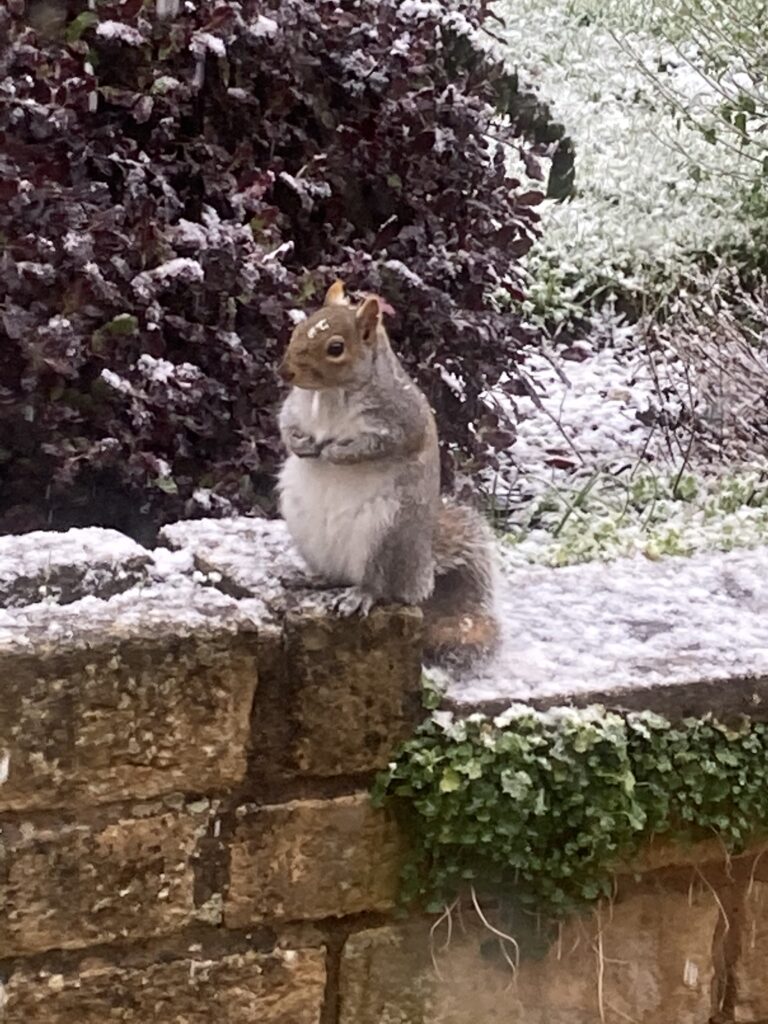 What we didn’t realise at first, is that they disappeared at some point in early to mid-April.

Then, one day, I was stood at the front door and I saw a baby squirrel. I’ve never seen a baby squirrel before. It’s kind of like a big squirrel, but with added cuteness. Its feet are really big and its tail is soft, but not bushy. Far from being frightened of me, the baby squirrel walked towards me. In fact, it slipped towards me, as we had a big black sheet of tarpaulin outside our front door (waiting for a new patio to be laid). We tried chasing it away, as I didn’t feel it was a safe place for it to be, but it kept walking back.

So we went inside and shut the door. As we looked out of the window, we saw another baby squirrel tentatively making its way down our big tree. But the first squirrel just stayed outside the front door. So my eldest picked it up and returned it to the tree with its brother or sister.

We were concerned that they’d been abandoned, as we hadn’t seen the adult squirrels for a few days. I suspected they’d had an accident. My eldest started reading up on baby squirrels and tried calling a wildlife rescue place.

The advice was a bit conflicting – some of it suggested that if they’re old enough to walk around, they are old enough to fend for themselves. Other advice said they wouldn’t be weaned until they were 10 weeks. Looking at photos and information which suggested squirrels are usually born in March, I thought they were only six or seven weeks old.

My eldest put them some pistachios and guinea pig food in a bowl and put them back in the tree. We kept going to check on them for the rest of the day. 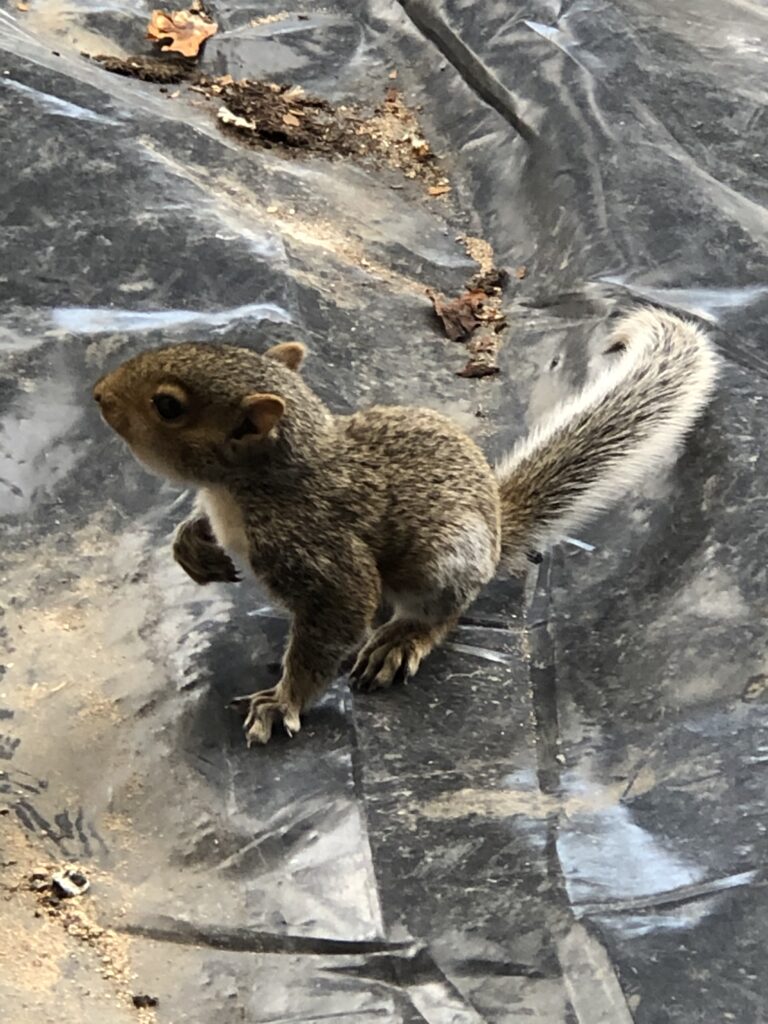 The next morning, I saw a magpie pecking at something on the front garden and I knew exactly what it was. One of the squirrels hadn’t made it through the night. I was annoyed with myself for not making more effort to look after them (apparently you can feed them puppy milk and they are OK to be held by humans), but I’d hoped the parents would come back to feed them. We could still see the other squirrel’s little tail in the tree, but sadly s/he hadn’t made it either.

But there was another twist in the bushy tail to come…

Three days later, we saw an adult squirrel limping across our garden, dragging its own flattened tail and back legs. My feeling was that it had been run over and had probably been lying low for a few days until it could move again – unfortunately being unable to get to its babies. Remarkably, the squirrel pulled itself up on the fence and dropped over the other side.

My neighbour said it had been like that for a few days and was managing to eat and drink. My eldest wanted to call a wildlife rescue place again, but my neighbour felt they would put it out of its misery.

The next day, the squirrel was in the middle of the road. The builder working on our patio thought it had been hit by a car, but it didn’t seem any more injured than it had previously.

Not one, but two, vicars were walking along the other side of the road, so they came over to see what was going on (can you get more small village than that?). They felt we should call a wildlife rescue place and not allow the squirrel to suffer. I knew the reality was it couldn’t survive much longer, although it had done a remarkable job so far.

It pulled itself off the road, and crawled under a shrub between our garden and our other neighbour’s garden. I put some pistachios down for it and texted my first neighbour to let her know where it was.

The next morning, she texted to say the squirrel was dead under her tree. It had dragged itself across the width of our front garden and up and over a high fence to get there.

I felt sad that it had been through so much, but was very impressed by its resilience.

The garden isn’t the same without the squirrels. I really hope some more move in soon.