It was a chance comment by blogging friend Louise from Little Hearts Big Love that got me wondering if I could do 1000 hours outside for 2021. I’m not the sort of person who makes new year’s resolutions or sets goals or aims for a year. I spend enough time feeling under pressure just from day to day life of raising three teenagers, working and running a home. I know that if I set myself additional goals, it will be just another thing to wake me up early. And believe, me I really don’t need anything else to wake me up early.

But I love being outside and already spend a lot of time out there. So the idea of achieving 1000 hours in 2o21 is appealing.

My first thought of course was ‘I can do that!’. Then I realised that 1000 hours outside is almost three hours a day, every single day. In fact, it’s about two hours and 45 minutes a day.

On my most basic day, I spend an hour and a half outside – which is three half hour walks. But most days I go for a run rather than one of those walks, which takes slightly longer. On Sundays, it takes significantly longer, as I run 10 miles, which is an hour and a half.

There are so many benefits to being outside. Of course, exercise has physical and mental health benefits. But just being in fresh air, surrounded by nature, helps you to relax and feel happier and less stressed. You don’t need to be in a park or the countryside to feel the benefits of being outdoors, your own garden is good, as is a quick walk around your neighbourhood. If you’re feeling lonely or isolated thanks to the pandemic, smiling and saying hello to people is a great boost to your wellbeing too.

The initial plan was for me to run Newport marathon in April. But now that has been postponed until October. Training for a marathon is a lot of running and a lot of time outside. If it goes ahead, I will get up to three and a half hours on my longest training run. All being well, the actual marathon will take me just over four hours.

Of course, being outside doesn’t just mean exercising. You can just stand or sit outside. I usually eat my lunch outside on dry days between April and September, which is another 20 minutes to half an hour outside. When we are on holiday (if those happen this year), we spend hours outside.

I started measuring my hours outside on 1st January, using a random app which is actually for tracking hours worked. With it being winter, the first couple of days were fairly minimal hours outside (around the 1 hour 30 mark), but I’m confident that will increase as the weather improves.

The current lockdown did mess things up for me after just a few days, as we are only allowed to exercise outdoors once a day. I’ll be honest, I don’t have either the time or the motivation to get outside for 2 hours and 45 minutes in one go. Apart from anything else, I would get really cold! In the first lockdown, we spent a lot of time in the garden, but it is too cold and damp for that at the moment, so lockdown is really restricting the opportunities to get outside.

My feeling is that I probably can manage 1000 hours outside in 2021, as long as the current lockdown rules don’t go on for too long. I promise not to beat myself up if I’m a long way off that. Although I know I will be desperate to complete it if it gets to December and I’m only a few hours short!

Do you think you could manage 1000 hours outside in a year? 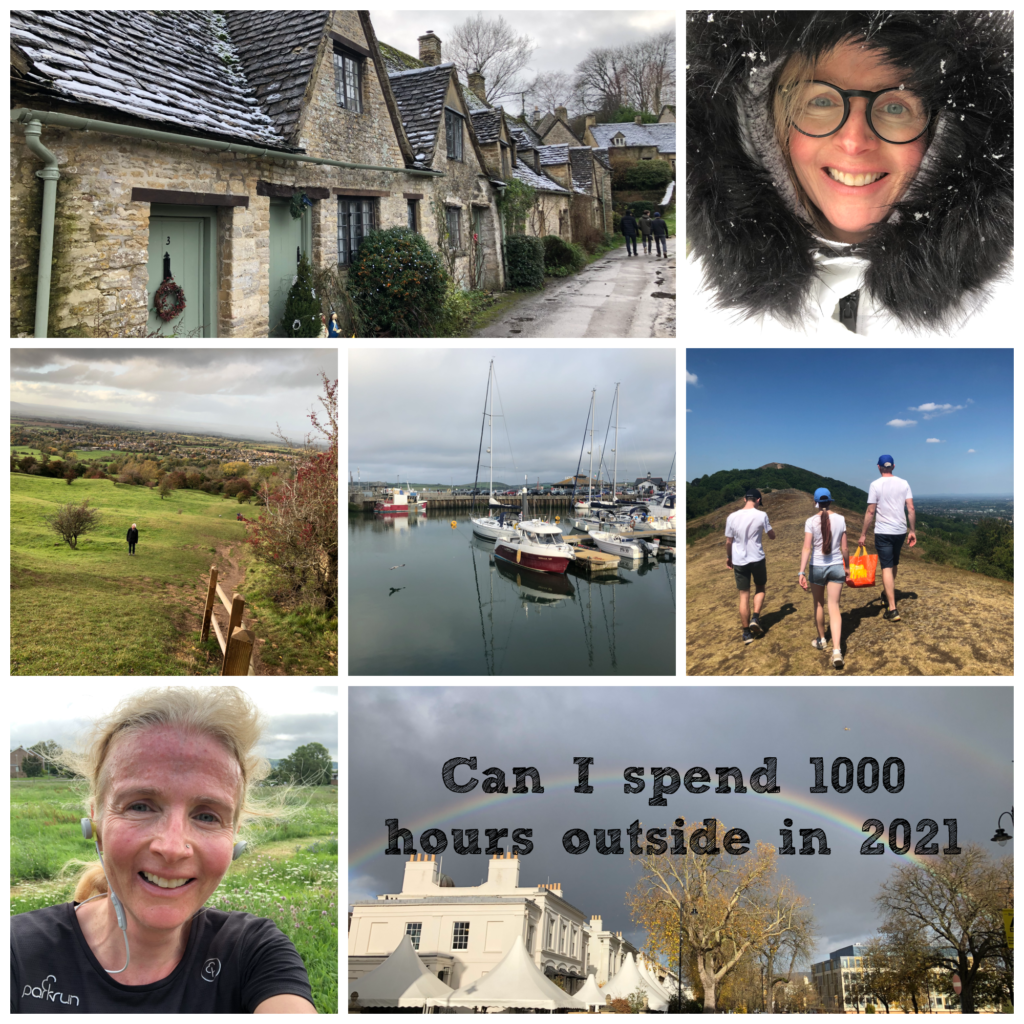