The rabbits: then and now

Home » Family » The rabbits: then and now

In December, we became ‘foster carers’ to two baby rabbits before Father Christmas delivered them to their rightful owners on Christmas Eve. I had rabbits as pets right from the age of 9 well into adulthood, so looking after them would be a doddle.

Except that now rabbits come with a long list of instructions. In our day, I have to admit that the rabbits thrived largely on neglect. I’m not proud of that fact and I always swore I would care for my guinea pigs much better (and I do).

We only ever had one rabbit at a time, which I know is frowned on now (and rightly so, but we didn’t know any different then). The only time we had two was when our longest surviving childhood bunny was still living at my parents’ house and was joined by my own rabbit from my rented flat that I couldn’t take to London with me. But they always lived in separate hutches.

Our rabbits used to get cleaned at most once a week. Depending on where we were living at the time, they might have got out for a regular run, or they might not. We never had an actual run for them, so they were always free to run in the garden, or on the balcony or around the flat. If they were running round the garden, they were VERY hard to catch, which made getting them out far less of an attractive option. (We did actually have one escape from the garden, when my younger son was a newborn baby. Luckily, someone caught him and took him to an animal shelter, so we got him back.)

Our rabbits didn’t have injections, they didn’t get groomed and they didn’t have hay in their hutches. Their bedding was straw and newspaper. They were fed twice a day – nuggets in the morning and vegetables in the afternoon – and always had fresh water.

With the baby rabbits, we learned that newspaper could be poisonous to them. They needed sawdust as their main bedding, with straw to hide in and hay to eat. They were only supposed to be fed once a day – only a handful of food each – and they weren’t allowed vegetables until they were 16 weeks (which meant we never gave them vegetables). At night, we microwaved a special pad to keep them warm.

It was a fair amount of work to look after them – two rabbits can produce a lot of poo in a very short space of time and the hutch needed a partial clean every couple of days.

In reality, the rabbits wolfed their food down in seconds. I couldn’t cope with the guilt of them only having a handful of food a day, so I fed them again in the evening. I had a desperate urge to give them vegetables, it seemed very strange not to, but of course I resisted!

For three weeks, I lived in absolute fear of the rabbits dying. Can you imagine being given responsibility for animals – a child’s Christmas presents – and them not surviving? I’m pleased to say that they survived.

Now the bunnies are with their real owners, they will need regular injections to prevent myxomatosis and rabbit (viral) haemorrhagic disease, both of which are fatal. I don’t know if these diseases were as common when we had rabbits, or whether we were just lucky to avoid them. The rabbits have reached 16 weeks and have been neutered. The owners were warned that they would fight if they weren’t neutered, and they have been fighting so much they have had to be separated. Hopefully they will now calm down and be able to live together again.

Knowing all I know now about rabbits, it’s surprising that our old rabbits survived, but they did! I’m glad that we care for our guinea pigs better than we cared for our childhood rabbits – and that the kids are learning how much work they need to put in to care for pets properly (even if it is me doing the majority of the work!). 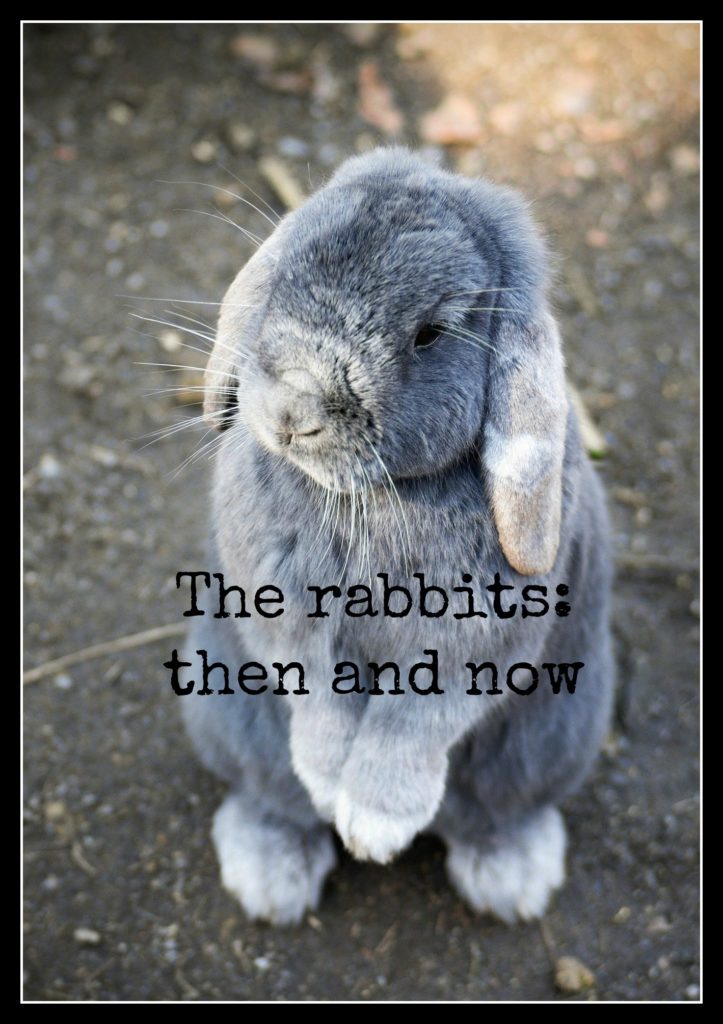