I was lucky enough to go and see Spice Girls on their Spice World tour in Coventry this week. I loved the Spice Girls back in the day and saw both of their tours back in the 90s – one with Geri and one without. I would have been gutted to miss out on this one. Luckily my old friend from work and her daughters managed to get tickets for us. 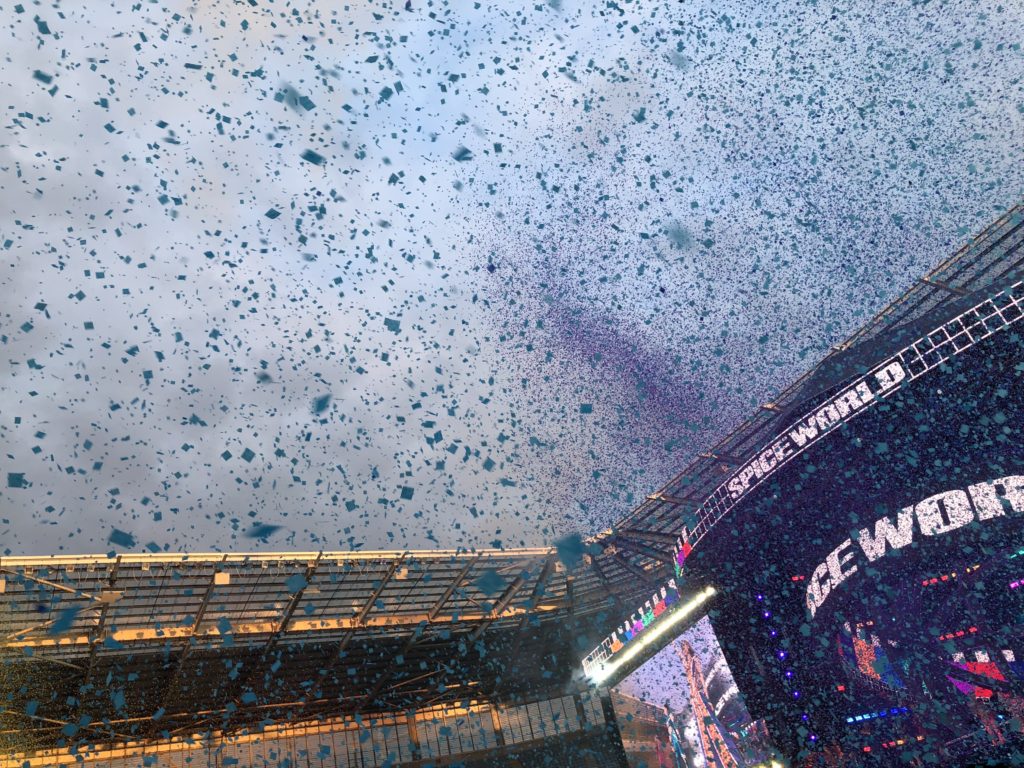 It sounds cheesy, but the Spice Girls got me though probably the toughest time of my life. As tough times of life go, it was pretty tame, but it was my tough time.

When Wannabe came out, I fell in love. With the song and with the Spice Girls. I was 22, had been graduated for a year and was working full-time in McDonald’s while desperately looking for a ‘proper’ job. I was living in a studio flat in Nottingham with my boyfriend (now husband) and I was very unhappy.

I was an indie kid and people like me ‘shouldn’t’ have liked the Spice Girls. I was too old too. They were aimed at kids and teenagers. But their music and their attitude gave me some hope that life could get better.

When I did eventually get a ‘proper’ job a year later, it was still tough. My job was in London and I was on my own, away from my support network of boyfriend, family and friends. I made new friends, but I was lonely a lot of the time. But I had the Spice Girls. 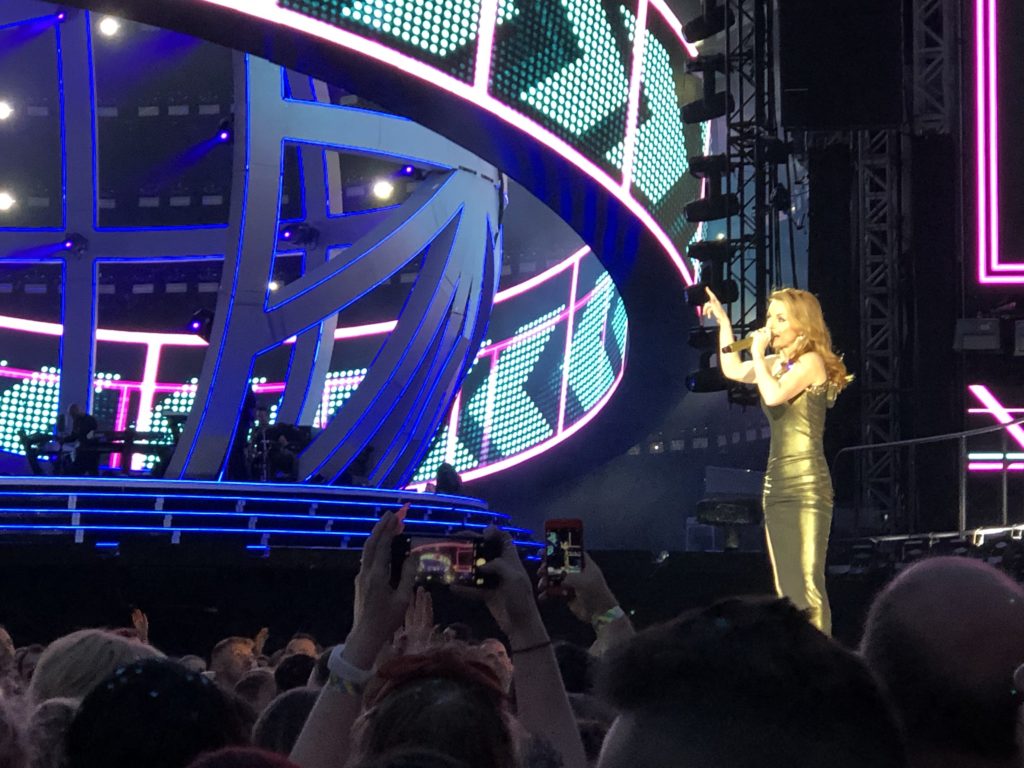 In my head, I wasn’t a girl who worked in McDonalds and felt depressed all the time. I was the Spice Girls’ missing sixth member. They just didn’t know it yet. I listened to their music, I repeatedly watched their ‘documentary’ video and read a cheap and tacky book they’d published. I had posters and cut out pictures of them – I’d even carefully peeled a couple of large fly posters in the middle of the night to stick on my wall.

In 2019, just like the Spice Girls, I am a very different person. Married with kids and a nice house, with my family nearby. I’ve had a proper job and now I’ve chosen to work for myself at home.

But I needed to see the Spice Girls again. 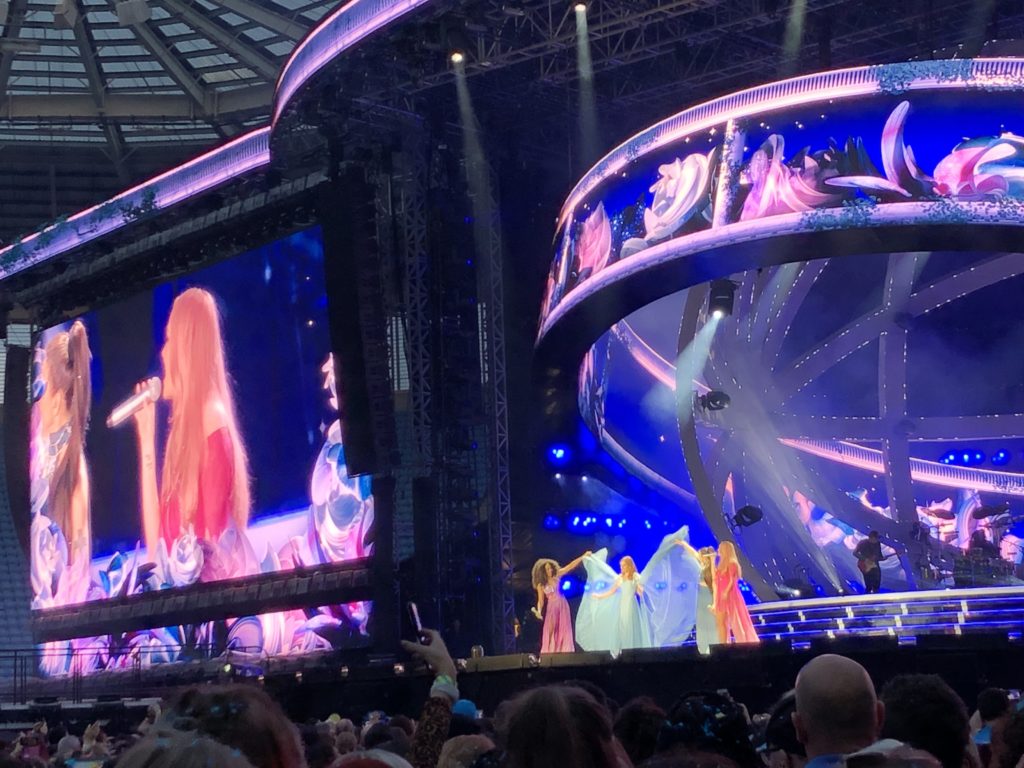 So on a wet and miserable day, we headed for Coventry’s Ricoh Arena. We got soaked on the way to the stadium. But the rain had the decency to stop before support act, Jess Glynne, came on.

And then it was time for the Spice Girls! Well, after 15 minutes of their dancers – each with a Spice persona – doing poses to warm the crowd up.

Scary, Baby, Ginger and Sporty crashed onto the stage with Spice Up Your Life. Surely one of the most feel good songs ever? It had been reported that the sound on previous shows wasn’t good and to be honest it wasn’t great in Coventry either. But who needs the sound when the whole crowd are singing along? We had two of the loudest, most out of tune singers ever next to us, but they were having the best time (and they covered up my terrible singing!), so what’s not to love? 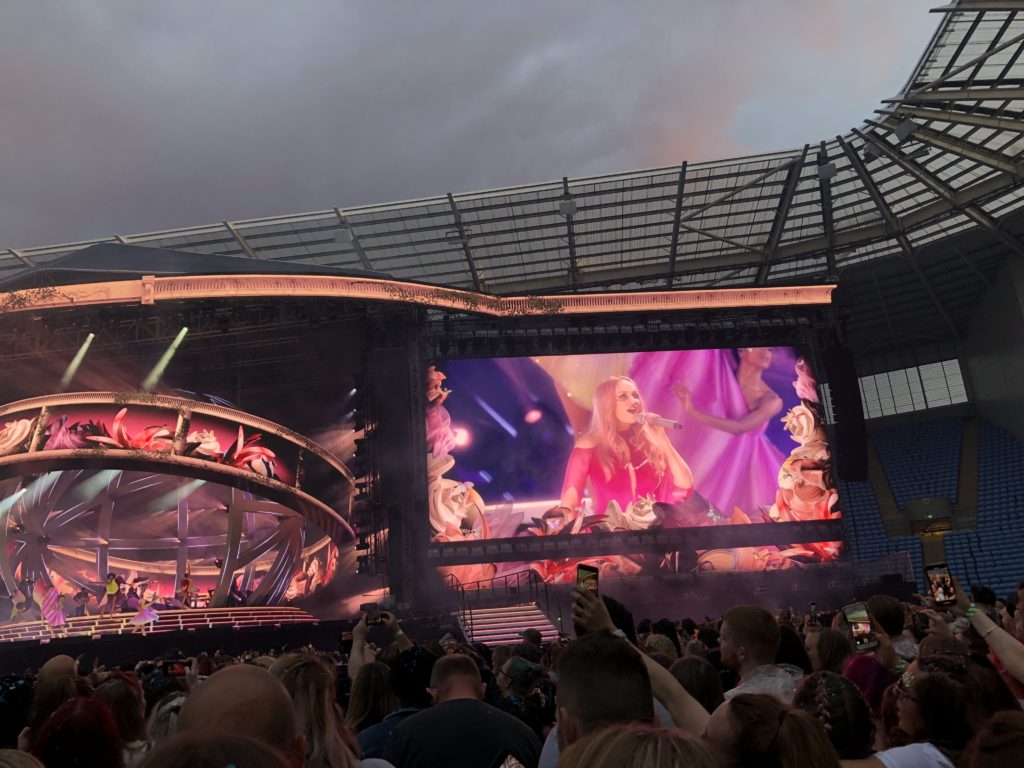 The Spice Girls moved on to If U Can’t Dance and Who Do You Think You Are?. The stage was amazing – the effects were constantly changing and it was hard to even believe that it was actually the same stage being used for Viva Forever as was used for Wannabe.

I was horrified to discover that I didn’t remember some of the album tracks that well. All those years of listening to the Spice Girls! The poor sound made it all a bit worse. Sometimes they were halfway through a barely audible song before the words back to me. 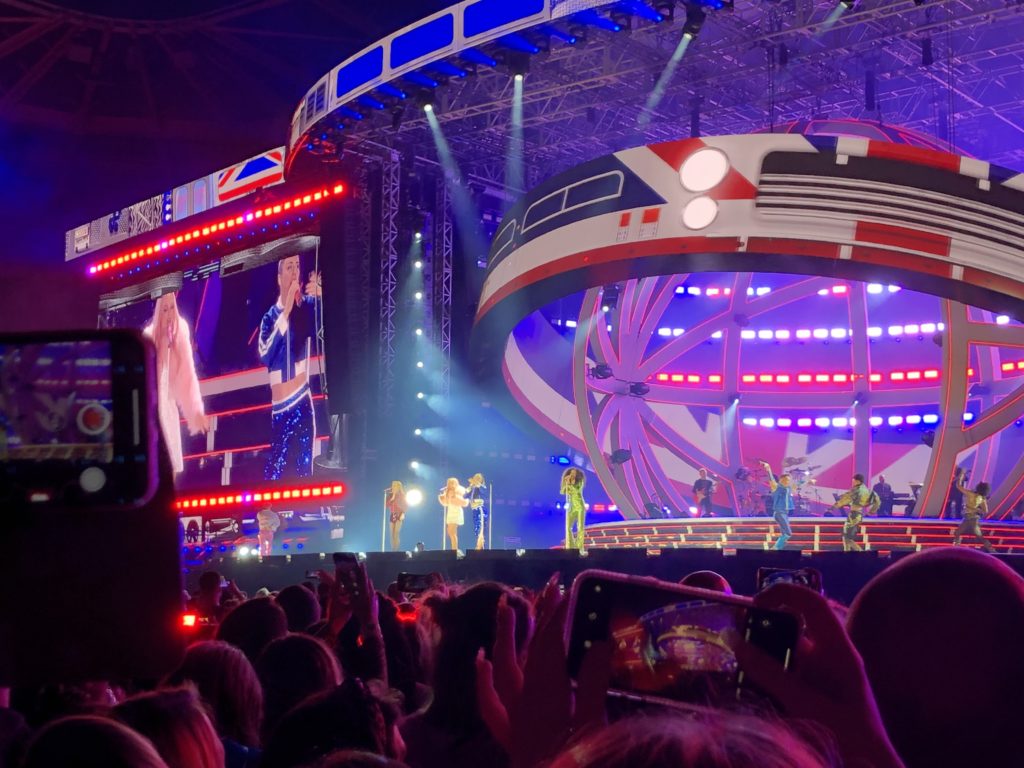 There were numerous costume changes and the girls looked fabulous in all of them. Mel B was still scary, Emma was still baby and cute (although I find cute a bit weird in someone over 40) and Mel C was still as sporty as ever. Geri seemed to have adopted ‘regal’ as her new ginger persona, but that was fine with me. There didn’t seem to be any evidence of the reported animosity between Geri and Mel B. 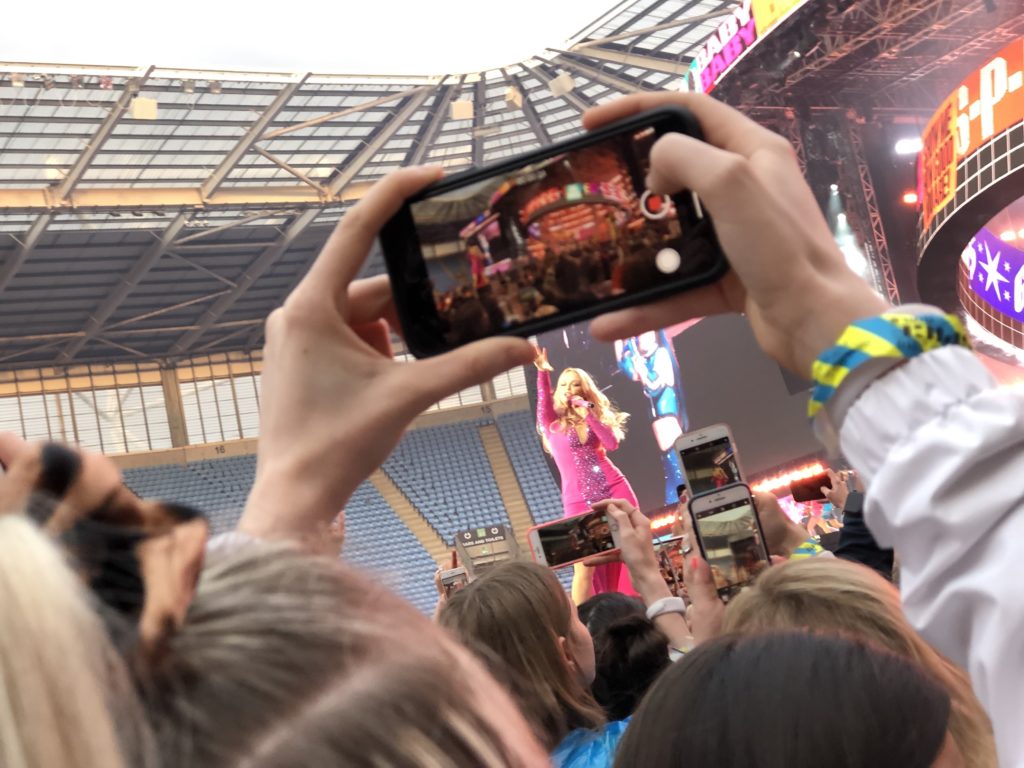 Viva Forever, Goodbye (which Geri was allowed to join in, even though it was about her leaving the band), Too Much, Mama and 2 Become 1 were all beautiful.

Stop and Say You’ll Be There were just uplifting and brilliant, like the Spice Girls should be.

They finished, of course, with Wannabe. The girls were all wearing sparklier versions of their costumes from that very first video. The video that made the world go ‘What is this? Who are these girls? What are they doing?’.

They’re the Spice Girls. They’re in their 40s now. But they’ve still got it. 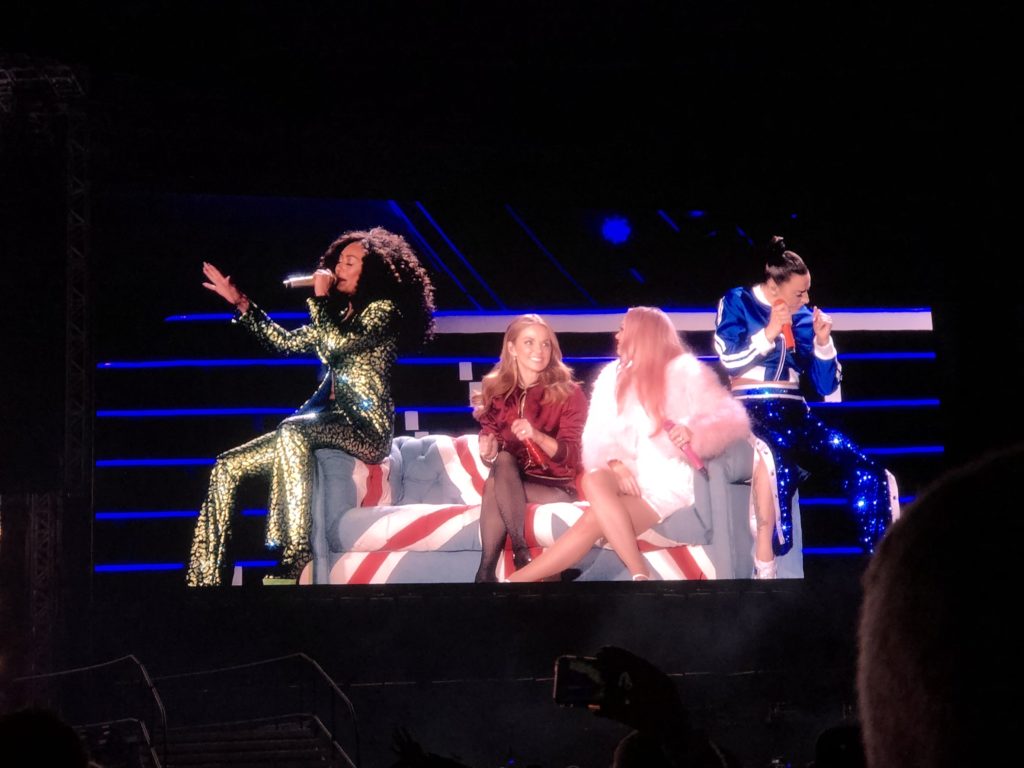