Scout camps (and school residentials) can be tough for fussy eaters. The food is good – filling and well-balanced, with plenty of protein, carbs and fruit and veg to keep kids full of energy for the activities they’re doing. It might be stew, sausage and mash, stir fry or spaghetti bolognese. But that can be a minefield for fussy eaters.

I’ll always remember my eldest’s first Cub camp when he was 9. He was away for three nights and when he came home he was noticeably thinner. I’d warned the leader he was fussy. And I’d been told the same thing I’d been told for the last nine years: ‘If he’s hungry, he’ll eat’. But I can confirm that with my kids (my eldest back then and my daughter now), that is not the case. If they’re hungry, they won’t eat, they will just go hungry.

When he came home the leader told me that, yes, he really was fussy. They’d tried hard to tempt him, but to no avail. Then the leader had been given a hamper of food as a birthday present. It contained pesto. My son told her he liked pesto. She made him some pesto. On the last night, he actually ate a proper meal.

‘But why didn’t you buy something from the tuck shop?’ I said.

And that’s when I realised how well I’d done over the years with my work on getting the kids to eat healthily and know that they were only allowed chocolate if they ate their meals. I’d done too well. I’d caused my son to nearly starve. Because he thought he couldn’t buy a Mars Bar when he hadn’t eaten his tea.

So now every time my kids go away, I make sure they’ve got enough money to buy food if they need it. And I remind them to buy food that is high in calories if they haven’t eaten enough at mealtimes. (Yes, meals are always their number one priority, but I know my daughter won’t eat a plate of stew.) When my daughter went on Scout camp recently, I also packed her a packet of crisps and a Coco Pop Bar for every day, so she at least had a couple of hundred extra calories there if she needed them.

The leader knew she was fussy, so was careful to always offer her an alternative if she didn’t like the main meal, which was often. The alternative was usually a cheese sandwich. Her favourite meal while she was away was spaghetti and meatballs, which she always enjoys at home, followed by curry, which she doesn’t really like at home!

‘Twixes saved my life for the first few days. And Ribena and Fruit Shoots.’

When she hadn’t eaten enough, she followed my advice and bought Twixes, Ribena and Fruit Shoots! Then she remembered the food she’d got in her bag, so stopped buying food and started eating the food she’d taken with her, although she brought home two Coco Pop bars and three packets of crisps. She also discovered after a few days (I’m really not sure why she didn’t know this from the start) that she could go back to the mess tent at any time for a drink of squash and a biscuit. For some reason she thought the only drinks they had available were water and hot chocolate, neither of which she likes.

So my daughter survived Scout camp and I couldn’t be happier. Not only did she survive, but she had the best time. A Scout who has had enough to eat and drink is a happy Scout, who doesn’t miss home and makes the most of all the amazing opportunities on offer on camp. 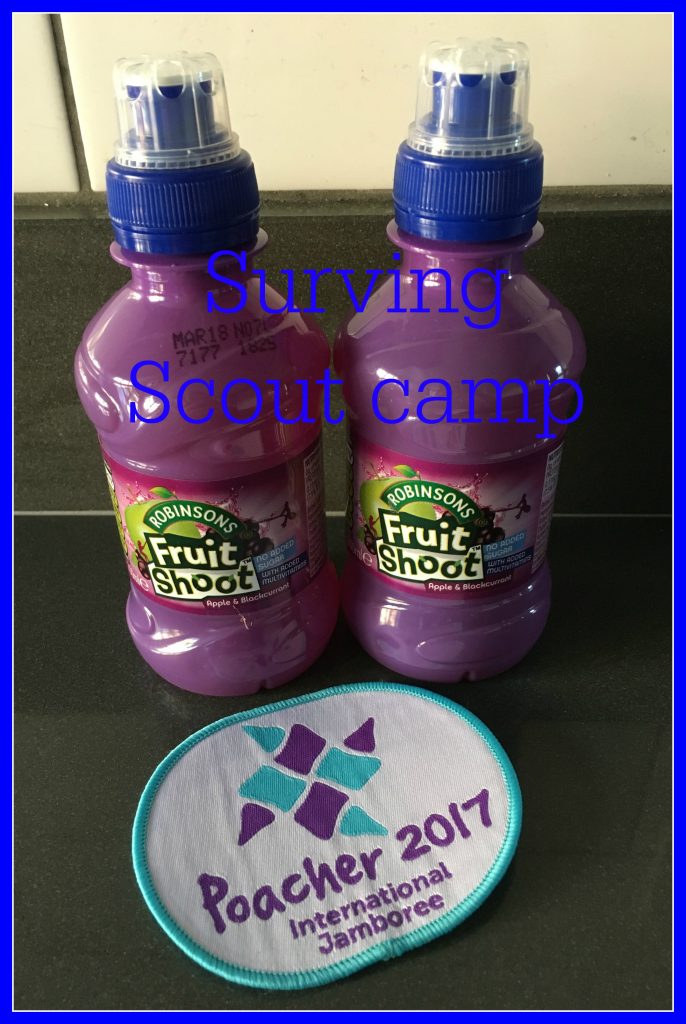