Going to Wychwood Festival every year has become something of a tradition for our family. We go along with my parents, my sister, my brother-in-law and little niece and nephew and I can honestly say it is one of the best days of the year for us every year. It’s like stepping away from real-life into another world. And everyone needs to do that sometimes, don’t they?

Held at Cheltenham Racecourse every year on the second weekend of half-term (the one after the bank holiday), it is truly a family festival. 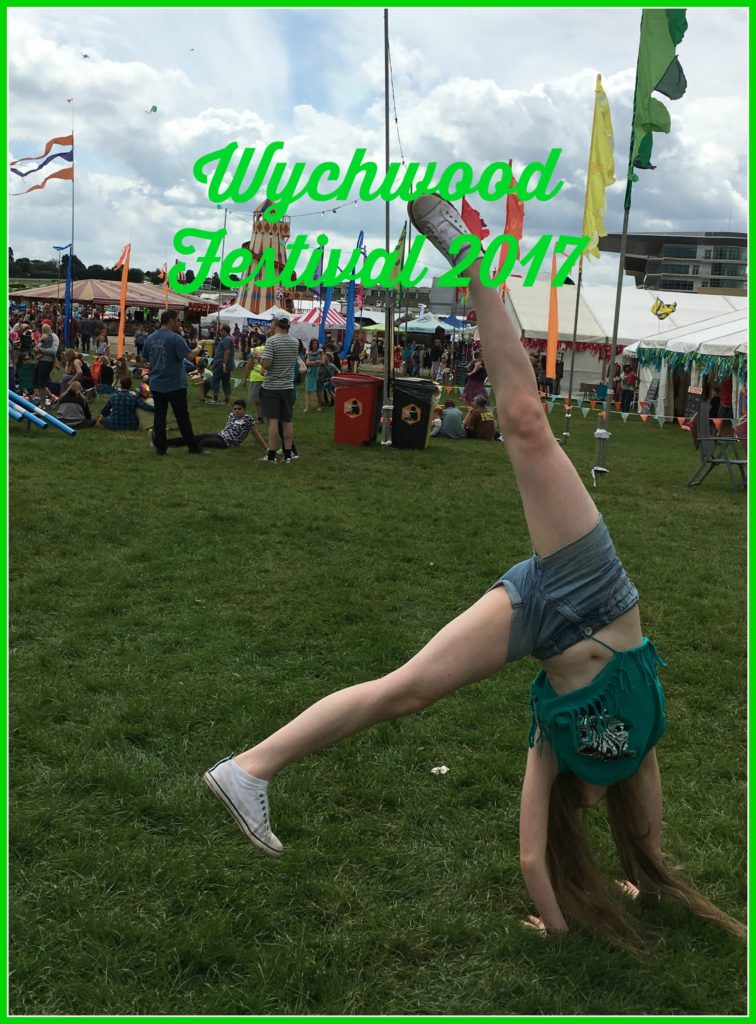 Cheltenham is easy to get to by train or car. The racecourse is just outside the town centre. Don’t expect a seven hour queue to get onto the site – the worst you can expect is to slow down slightly as you drive into the car park. There’s loads of parking on site, which is very close to where the festival is held, so not too far to walk lugging your chairs and snacks!

The festival is held on a very small part of the racecourse. It is small enough that we have felt comfortable with our kids walking around on their own from the age of 10. The big top stage and food outlets are at one end of the site, the main stage in the middle and the Hobgoblin stage and family activities at the other end of the site. Stalls selling the usual ethnic and quirky stuff run along the length of the site. This year, the big trend seemed to be glitter on the face, but my daughter weighed up the cost of it and decided she would rather go on the inflatable slide and dodgems (more on those later!). 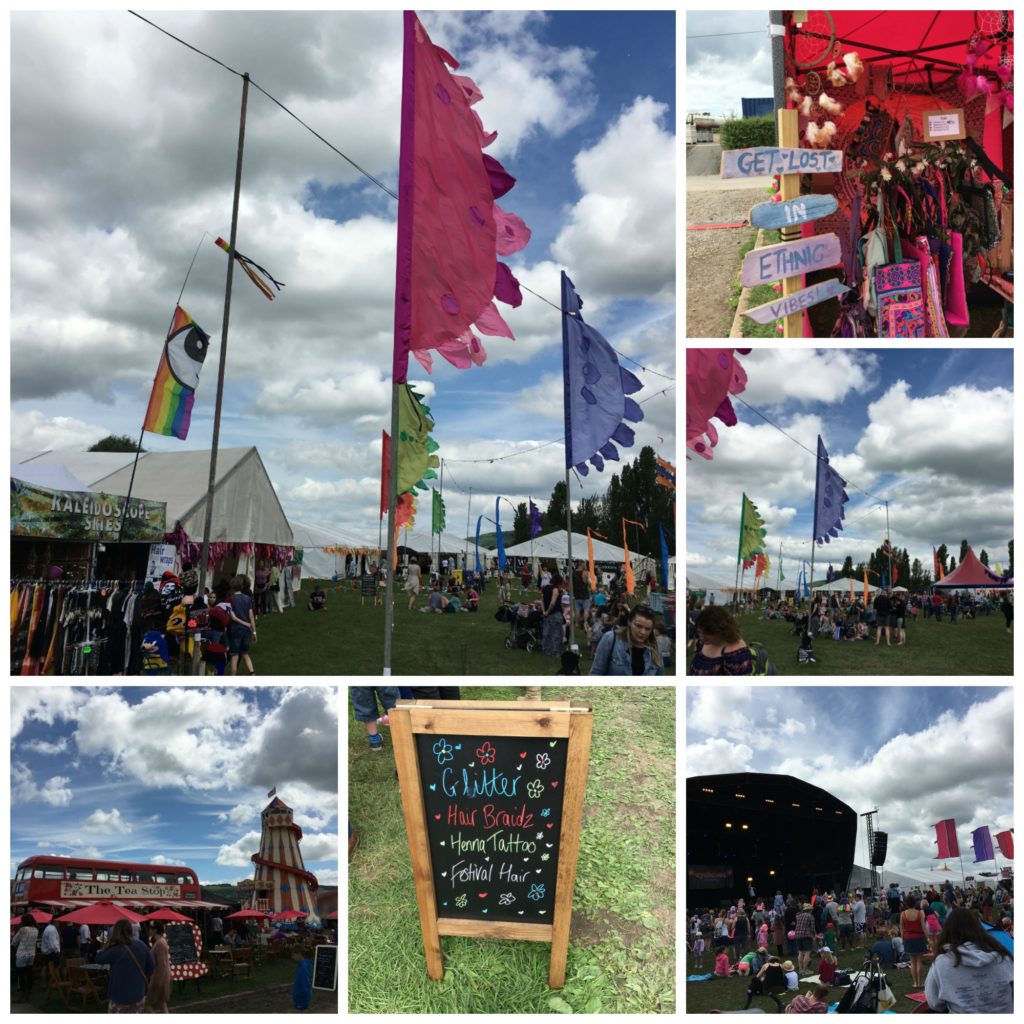 This year on Saturday, the main stage opened with Katy Ashworth off CBeebies’ I Can Cook, much to the delight of my niece and nephew. My daughter and I watched with them and an awful lot of excited tiny children and their parents, because my daughter is actually young enough to have watched the programme.

Harpers Ferry had a rock and roll sound, then The East Pointers were a folk band, who made the crowd very happy with their version of David Bowie’s Heroes.

Later in the day, the stage had a world music vibe, with reggae group, Aswad, followed by Kanda Bong Man and his Congolese beats. When I was starting to flag a bit, the pure joy of The Dhol Foundation got me moving again and put the smile right back on my face. They perform a mix of music from a variety of cultures, including a lot of bhangra. Their drumming technique and Indian dancers were totally infectious.

I felt I’d drawn the short straw a bit with OMD headlong on Saturday night (it was the Buzzcocks on Friday and the Levellers on Sunday), but my husband was very excited. Apparently his best friend’s mum loved them and he grew up listening to their music in her car. We’ve been together 24 years and I never knew that! Their show was slick and professional and very 80s-sounding. The crowd loved it, including my husband. Personally, I knew about two songs. I’m not sure how I’d missed out on their music growing up, but it was a great way to end a lovely long day.

The Hobgoblin stage has always been my husband’s favourite due to the beer! But this year the bar had moved outside, so there was more space to watch bands. The bands on the Hobgoblin stage are all up and coming local bands and we got very lucky when we stumbled upon Cherokii, a new band from Oxfordshire, consisting of just two people – a guitarist/ singer and a drummer. They played loudly and with so much energy. The drummer even moved to the middle of the tent for one song. The tent got busier and busier as they played as they were so good. Probably not one for the kids though, with the lyric ‘When I think of shit I think of you’. My husband went back to the Hobgoblin stage several times and said that, although the other bands were good, none of them could match Cherokii.

We’d never actually been in the Big Top in all our years of going to Wychwood. It’s actually quite a Small Top and a really nice place to get close to the bands. We saw Girli, a female pop/ rap duo. My daughter would have loved them, but missed them as she was busy in the family area with her cousins. 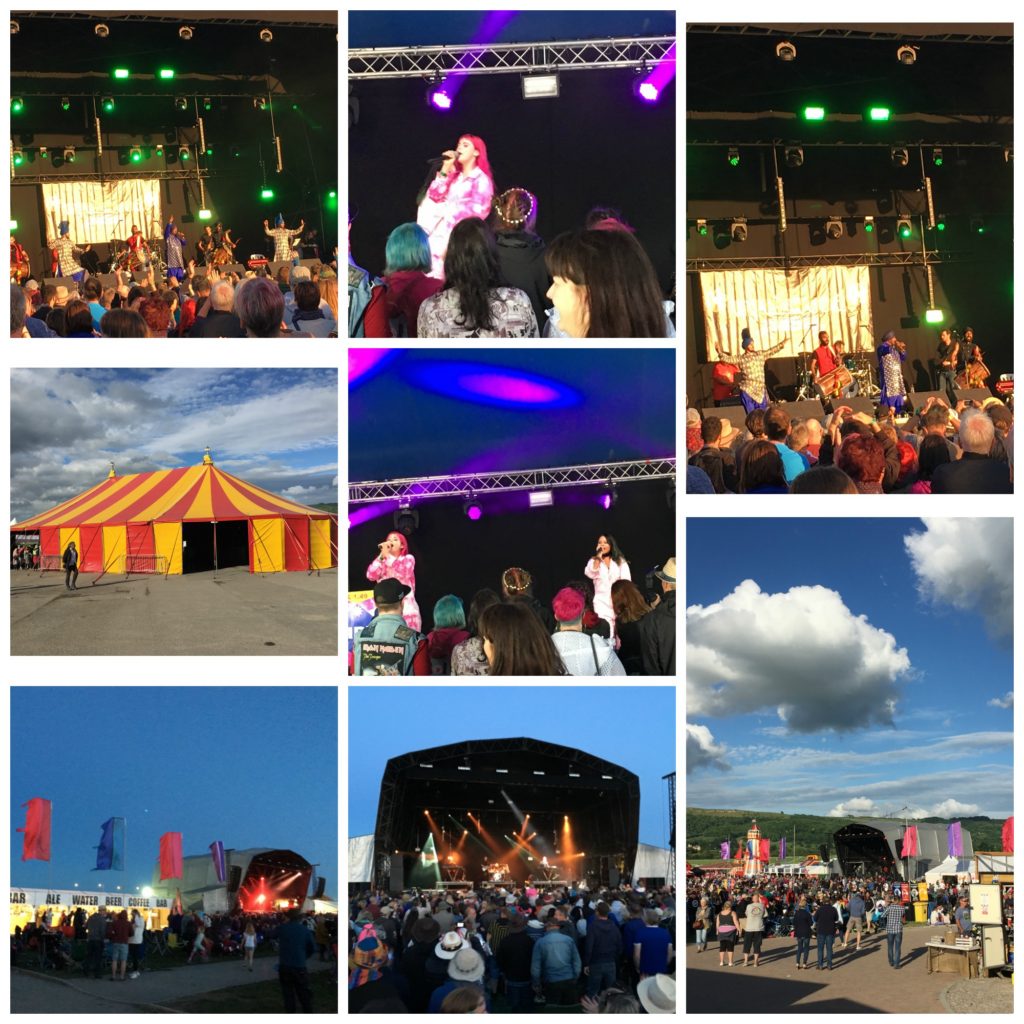 There is A LOT to do for kids. There are endless workshops for craft, circus skills, dance, music… You name it, kids can give it a go. There’s also a children’s literature tent where they can listen to authors read from their books. There are a number of tents in the family area, which have timetables outside them, so it’s easy to see what’s happening and when, but it’s just as easy to just pop in and join in.

My daughter and niece had a go at musical theatre dance, then my son joined them for circus activities.

On the whole, the kids’ activities are aimed at pre-school and primary school age children. My younger son and daughter preferred the paid-for activities. There are inflatables, including a bouncy slide and a sweeper arm. This year for the first time there was a proper old-fashioned helter-skelter and dodgems. I love a helter-skelter and couldn’t resist having a go. 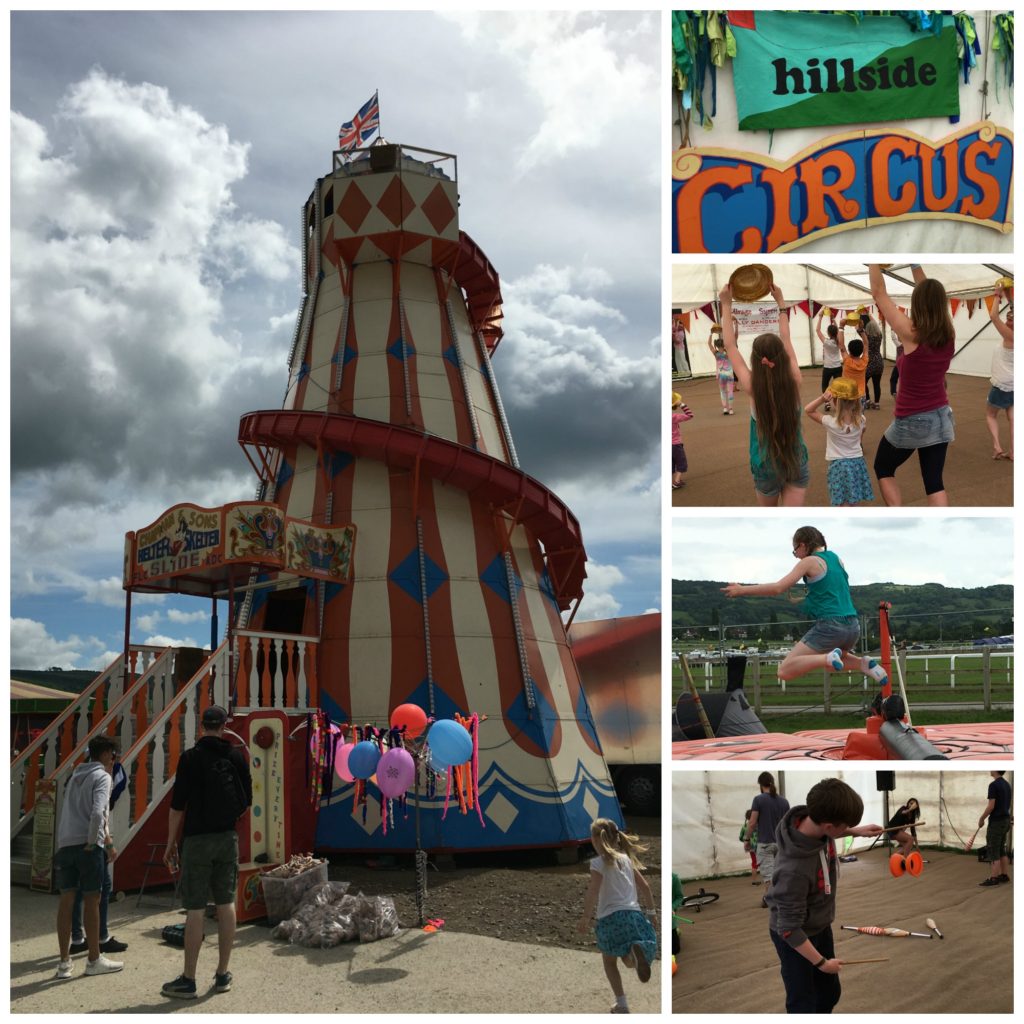 For me, the food at Wychwood is always one of the highlights. It is absolutely delicious and there is a huge choice from noodles and curry to pizza and burgers. At every mealtime we seem to go to five different food stalls as we all want something different. It’s lucky they’re all located right next to each other. At most of the stalls, a main meal will set you back about £7 or £8. It’s best that I don’t do the maths and work out how much we spent on five people having two meals there! You only live once, right? 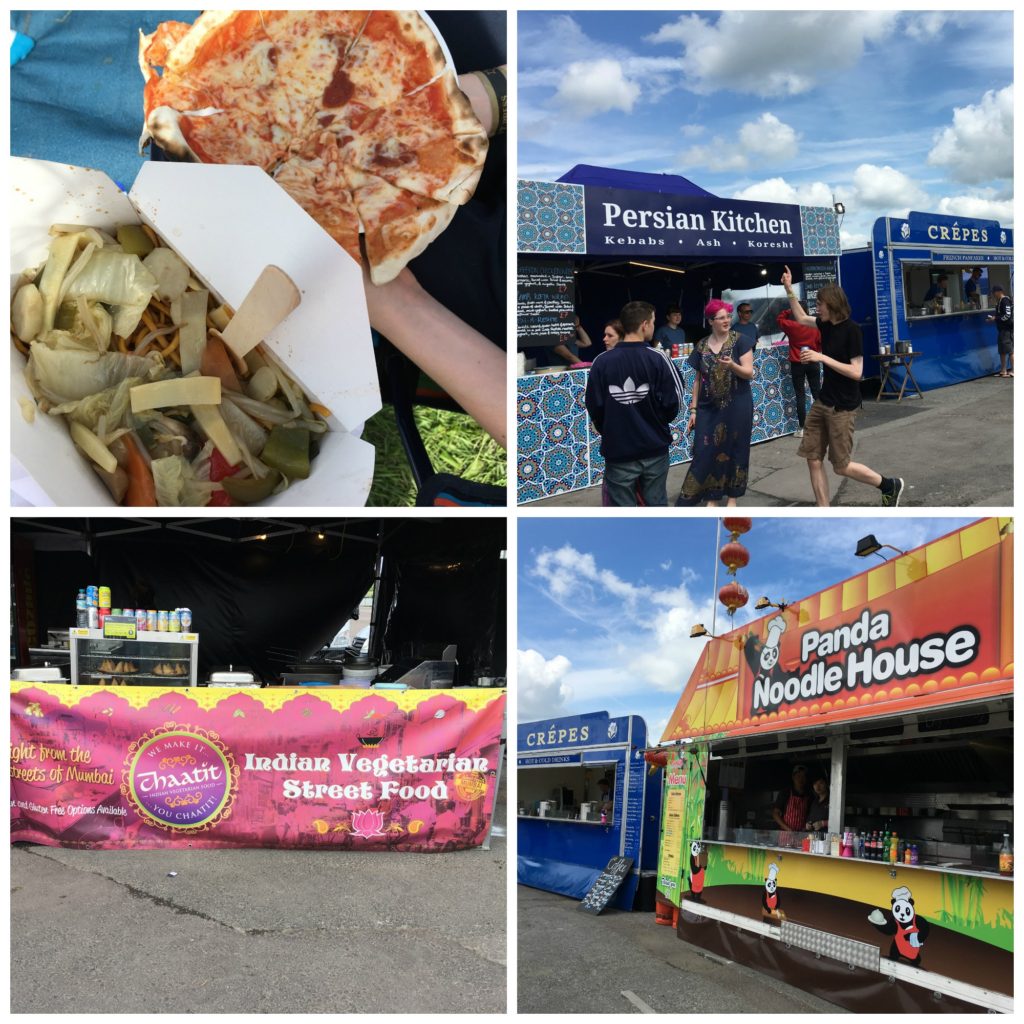 There are plenty of toilets at each end of the site, mainly ‘posh portaloos’, with a few traditional portaloos. I didn’t have to queue once and the toilets remained clean and well-stocked throughout the day. You didn’t have that at Glastonbury in 1992!

What can I say? Wychwood just has a really nice atmosphere. It’s laid-back, friendly and safe and everyone is happier. No wonder it seems to get busier every year.

But if you want to avoid the crowds a little bit, we always hang out to the left of the main stage, where we can still hear the music well without having to join the crowds unless we particularly want to.

It’s the start of June, so be prepared for classic British summer weather. We found it changed literally every five minutes from hot and sunny to cloudy and chilly, but at least we didn’t have any rain. By the early evening, I would have welcomed a coat and my eldest was seriously regretting his decision not to even take a jumper with him.

Talking of teenagers, they’ve always seems to be a bit under-represented at Wychwood, but there were definitely more of them there this year (and, as the mum of teenagers, I’m seeing this as a good thing). The majority of festival-goers do still seem to be parents with small children though.

Watch out for news of next year’s acts and tickets at http://wychwoodfestival.com

I was given tickets for myself and two of my children for the purposes of this review. All opinions are my own. 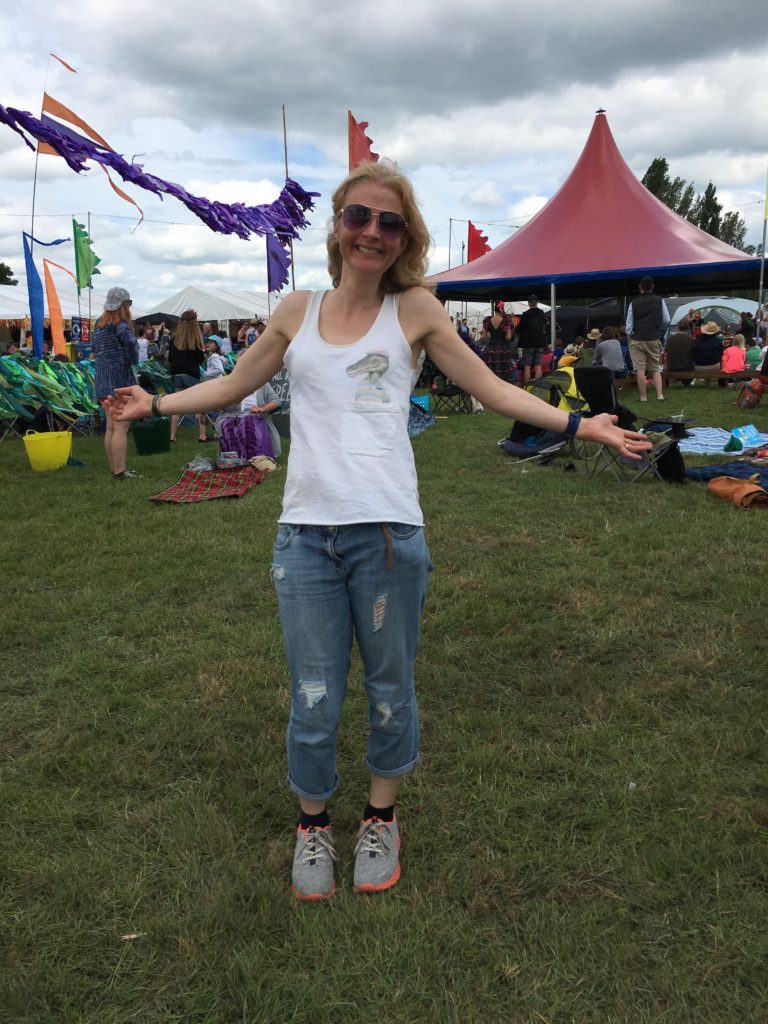