The GCSEs have started!

Home » Family » The GCSEs have started!

Well, the GCSEs have been underway for a few days and I’m pleased to say things are going pretty well. My son is in a routine and everything seems pretty calm and stress-free. Just as it should be. Just as I’d hoped it would be.

My son doesn’t have study leave just yet, which seems strange to me, but apparently it’s the norm at comprehensives these days. It means kids are definitely revising, rather than sleeping all day and playing Xbox or messing about on their phones.

I’m very proud of my son for the amount of revision he did for his GCSEs. He started slowly in February half-term and has gradually built up the time he spends on it. He’s not a kid who has ever been good at studying, so this is really impressive. For the last few weeks, he’s been doing two hours a day on weekdays and three hours on weekends.

He had his first exam, French, last Tuesday. As we counted down the days, it felt crazy to be saying ‘three days to GCSEs’, ‘two days to GCSEs’… I felt a little bit nervous myself, but also quite excited. This is what he’d worked for and he was finally going to put it all to the test.

Two days before his French GCSE, I realised we hadn’t stocked up his stationery (he’s the kind of kid who loses and breaks stuff all the time). Then the evening before we had a dash to Sainsburys, especially for Polos. He wasn’t even sure he was allowed to have them, but he wanted some just in case. He transplanted them into a clear plastic freezer bag.

The biggest piece of advice you’ll ever hear about GCSEs (other than to revise) is to get plenty of sleep. This isn’t something my son is good at. The night before, he’d had a shower and was cleaning his teeth by 10.30, which is very early for him (he’s usually doing those things after I’ve gone to bed). But then I heard him banging around in his room at midnight, which is not ideal. It took me longer to get to sleep that night too. Although I woke up at just after 5, which is normal for me.

On the morning he was calm. I got him up 10 minutes earlier than usual, as he usually gets ready in 25 minutes flat. I wanted him to have time to think carefully about what he had to do and make sure he was organised. Soon after he arrived at school, he texted to ask me his seat number for his first exam. Thank goodness I knew where his exam timetable was! Later he texted me to ask his seat number for the second exam. It is this sort of detail which is the exact reason I got him up 10 minutes early.

He was calm and happy when he got home. The first exams had gone well. He was particularly pleased with how he’d done in his biology exam. He got through the paper quickly (and promises he most definitely checked his answers back afterwards) and felt confident he would have got an A.

He eased himself into the exams quite gradually last week. He only had three exams – French and biology on the first day and chemistry on Thursday. This week and the first week after half-term are the busy ones. This week he’s got two English literature papers, geography, business studies, maths and physics.

He’s worked hard for his GCSEs and his reward is to be calm and relaxed for his exams. Here’s hoping that carries on right until 16th June, and he gets the grades he deserves in August. 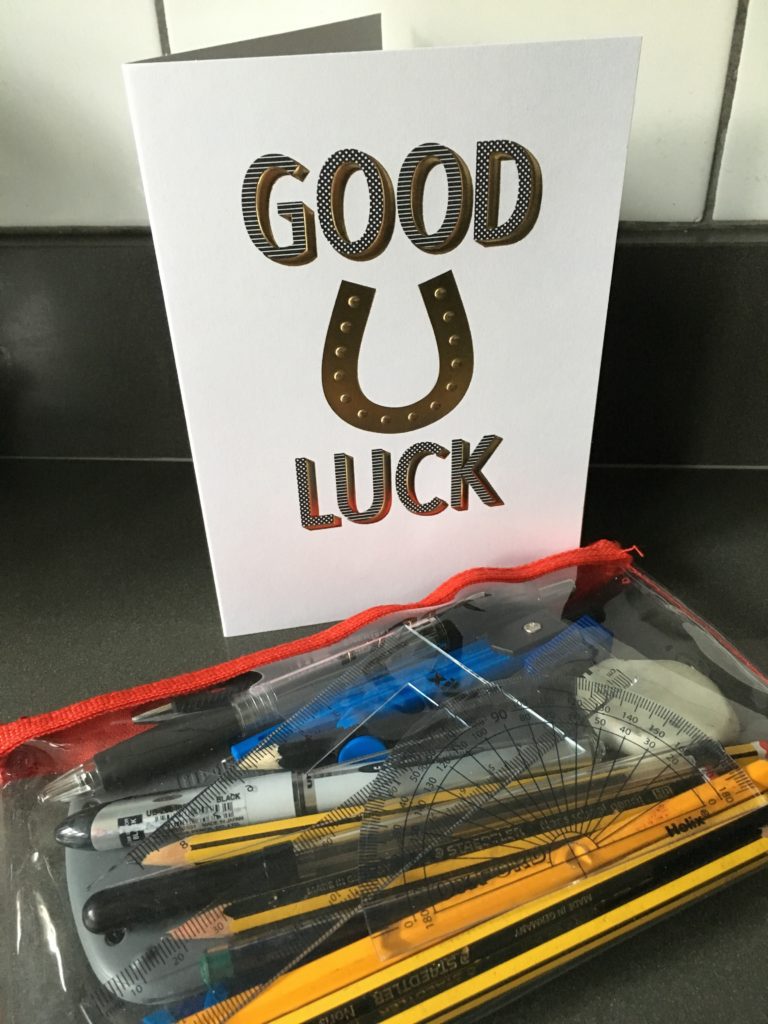