Every time. Every flipping time we have to buy school shoes it’s a hassle.

Because my younger son has wide feet. Really wide feet. Above an H. Which means he has to go up a half size or a size every time. And they only make one or two flipping awful styles to fit him.

With football boots and trainers, we just literally make the sizes up as we go along. So he had size 8 football boots in year 5 (have you seen how narrow football boots are?!) and we recently bought him a pair of trainers in a 9.5. Just half a size smaller than his dad – 30 years older and a whole lot taller.

But with school shoes, they’re actually supposed to fit.

Last summer, in total exasperation at the lack of styles for a boy with stupidly wide feet, I bought him men’s shoes. I was feeling pretty smug. They were smart and no more expensive than boys’ shoes.

But, as it turns out, men’s shoes are not hardwearing.

My son plays football every lunchtime. In his school shoes (apart from when he played in his socks and broke his toe). Boys’ shoes are built for playing football at lunchtime. Men’s shoes are not. They were already looking pretty knackered by October half-term and after Christmas I was feeling pretty ashamed to be sending my son to school in those shoes.

So in February half-term, we bit the bullet.

We went shopping for school shoes.

The good thing about February half-term is that nobody else is buying school shoes, so the shops were at least quiet. Which is a good job, as we had to go in so many of them.

We started with Clarks and I was shocked to discover that my son’s feet are actually only a 7.5. We add so many sizes on, that I had literally no idea what size they actually are. But of course we had to go up to an 8 or 8.5. And the selection was worse than ever. Not just horrible chunky lace-ups, but horrible chunky VELCRO. Seriously, what 13 year old boy with size 7.5 or 8 or 8.5 feet wants to wear velcro to go to school?!

Would we have to buy men’s shoes again and watch them fall apart in a matter of weeks?

No, we would try another children’s shoe shop!

In the next one, I didn’t bother getting his feet measured, I just explained the scenario.

They could offer us slip-ons.

So we headed for the next one. Where there were 27 people (OK, maybe six) gazing over a customer-free shop full of beautiful overpriced heels with matching handbags. And two kids being served in the children’s department, seemingly trying on every pair of shoes in the shop.

Twenty minutes we waited. TWENTY! Why couldn’t those lazy arses/ assistants downstairs leave the peace of the heels and matching handbags to assist my son? And why the flip couldn’t they turn the flipping irritating music off the telly?!

I was SO close to walking out. Because I knew it was just a box ticking exercise. We were there merely to confirm that none of the shoes in the kids’ department fit my son, before buying men’s shoes, which would fall apart before Easter.

When we were finally served, I explained our predicament – no point wasting time with measuring – and then something strange happened.

The assistant appeared with a PILE of boxes. Four pairs of shoes. OK, so two of them were horrible chunky lace-ups, but at least they weren’t velcro or slip-ons. And two of them were smart lace-ups. The sort of shoe a 13 year old boy at grammar school actually wants to wear!

Yes, they were a bit big (he had to go to a 9), but they were wide enough and they were smart enough. And they weren’t from the men’s department. And I won’t have to go shopping for school shoes for my son again until August. Thank flip for that! 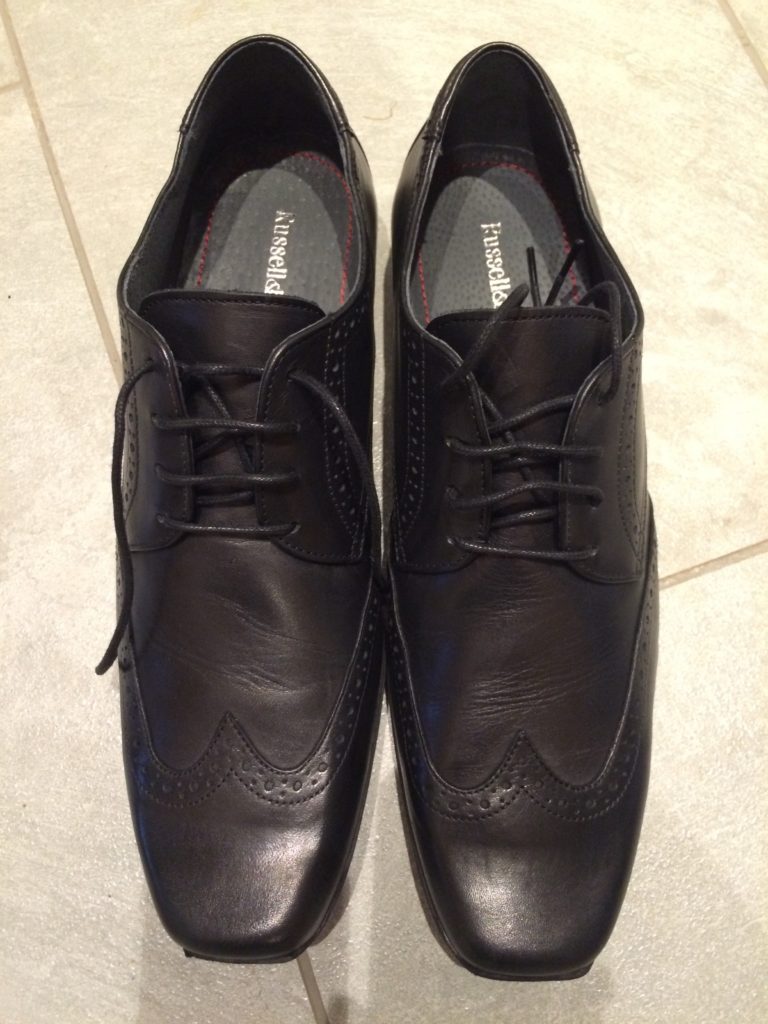