Before we went to Rome, knowing it would be quite late when we arrived and especially because it was my younger son’s 13th birthday, my husband and I wanted to be sure to find a nice restaurant to eat in on our first night. So we did some research on Trip Advisor and came up with something about a 10 or 15 minute walk away from our hotel which had a good mix of food, which would suit our family of vegetarians and fussy eaters.

When we arrived at our hotel, after a taxi journey of an hour and 15 minutes from the airport, we were predictably tired. And hungry. Very hungry. We pretty much dumped our suitcases in our rooms and headed straight out to find the restaurant. Except the hotel staff told us nothing would be open until 7.30. 7.30! We’re the sort of family that likes to eat at 5. We can do 6.30, but 7.30?!

At 7.20, we left the hotel again to head for the restaurant we’d found. But somehow the kids and I got drawn into another one.

The restaurant manager was so nice and welcoming. Where were we from? England?! Newcastle? Hmm, maybe not.

‘So guys, Manchester United or Chelsea?’

That’s the way to break the ice with my family! All of them are big Man Utd fans (my husband is from the North West, so they’re not typical southern glory-hunters).

But even as we had our menus and had placed our orders, he was still grumbling that we shouldn’t have gone into the first place we saw.

We were just happy to know that food was on its way.

And what food it was! We’d ordered four slices of bruschetta (knowing my daughter wouldn’t touch it with a bargepole) – two tomato and two with olive paste. And they were absolutely delicious! Maybe it was the hunger, but it felt like one of the nicest things I’d ever tasted. The tomatoes were about a million times better than any we have at home.

There was some confusion over which pizza was which and who’d ordered what. I suspect there may have been a couple of incorrect pizzas delivered, but it didn’t matter as we sorted them out and all ended up with a pizza we were happy with. I had courgette and aubergine, which I would never order at home, but it was absolutely delicious. My family are big pizza fans anyway, but they particularly loved those pizzas. 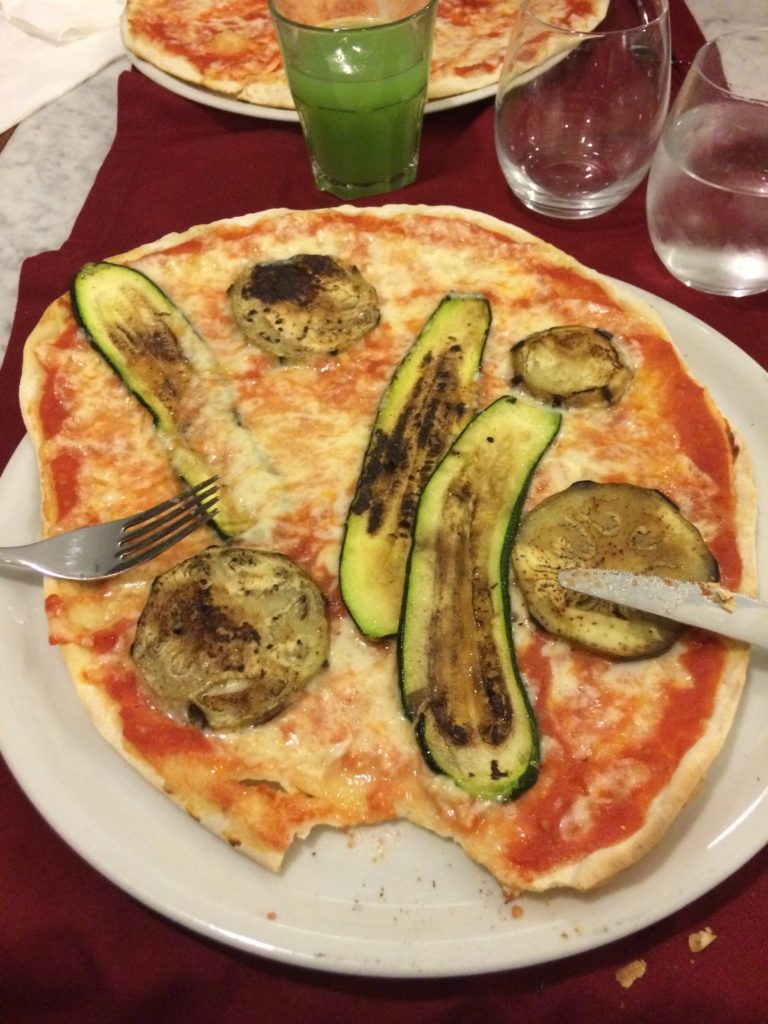 The manager continued to be friendly, welcoming and chatty throughout our meal. He took the kids to look at the desserts as they didn’t understand what was what from his descriptions.

I’d heard that Italians are very welcoming to families. I know my kids aren’t tiny and cute any more, but they can still be a bit troublesome and they can still be hard to please. The manager did everything he could to make us happy there and it really worked.

As we left, with my husband leaving a generous tip, he conceded that it definitely was a good restaurant. But we had got lucky and shouldn’t have rushed into the first one we saw.

The next day, we went to the restaurant we’d planned to go to in the first place. The food wasn’t quite as good and the service wasn’t in the same ballpark!

Sometimes you just have to trust your instincts on these things. Or your hunger.