Severe acne – the next generation

I can’t quite remember when my teenage son first got acne, but certainly photos of him from a couple of years ago show a few spots. They look like nothing to me now.

When it comes to spots, my poor kids have got the odds massively stacked against them. Not only have I suffered from acne since the age of 12 (and I’m still on Roaccutane, the strongest acne drug there is), but my husband had terrible spots as a teenager too. Luckily, he at least grew out of them by his early 20s.

I always wanted to keep any spots the kids had in check, so I first took my son to the doctor early last year. He was prescribed Duac, an antibiotic gel, which did a pretty good job for a while. The spots on his face definitely improved. The only problem was, he was developing spots on his back. Nobody sees spots on your back, but they can be very painful, especially when you have things rubbing against them. So it was time for something stronger.

This time he was prescribed Tetralysal, an antibiotic tablet. As it happens, I’d used Tetralysal and Duac together just before I went on Roaccutane and they worked pretty well for me. Sadly, we didn’t see Tetralysal make any difference to my son’s face. The spots on his back eased a bit, but his poor face just went downhill.

Maybe it was his time, his age, the absolute worst point in puberty for him and his skin? Or maybe it was just that the drugs didn’t work for him? Maybe it was a combination of the two? But all of a sudden, my son had terrible spots on his face.

And I really felt for him. Because I’ve been there. And it’s not a nice feeling. Knowing that your real face is hidden and obliterated behind these horrendous growths.

So we went back to the doctor. And I saw her search ‘severe acne’ on her computer. And that made me very sad. Because I suppose I’d been in denial up to that point about how bad his spots had really got. But anyone with eyes can see that his acne is severe. 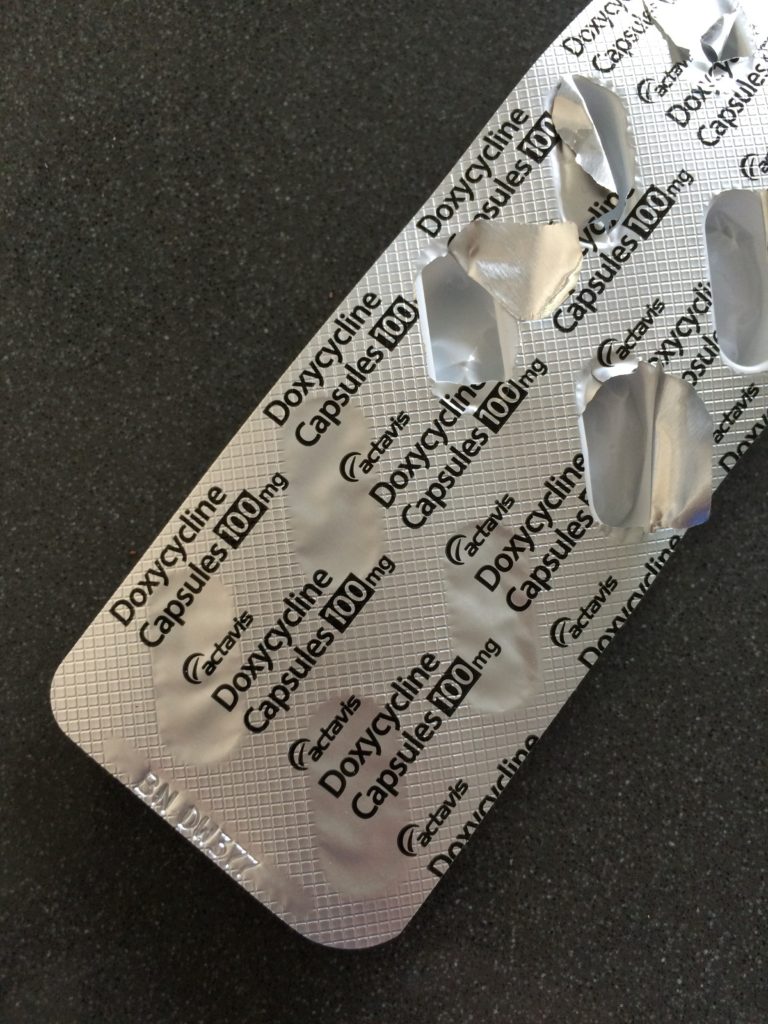 He’s now on a different oral antibiotics, with a different lotion. He’s got three months and if things don’t improve, it’s off to the hospital for Roaccutane. That scares me. Roaccutane is not something to be taken lightly. While it has given me, at the age of 42, the perfect skin I haven’t had since childhood, it was almost certainly responsible for the terrible flare-ups I had last year. (And I’m pleased to say my son looks nowhere near as bad as I did then.)

Most worryingly of all, it has been linked to suicide in teenage boys. That’s why I said no child of mine would ever go on it. But I know my son can’t go on as he is. He’s been very good about it, but I know it’s starting to get him down. And understandably so.

He says he won’t get depressed if he goes on Roaccutane and I think he’s right. He’s the most resilient person I know. While his brother and sister sometimes show signs of emotional fragility, my eldest is mentally incredibly strong. Nothing seems to upset him.

But I still hope we don’t have to go there, that this time we will have found a solution that works. He’s been on the new medication for a few weeks and nothing has changed, but with skin things don’t change fast. Hopefully we will see some signs of improvement in the next couple of weeks, otherwise there could be two people on Roaccutane in our house.