The garden project started pretty much on a whim in February half-term. We were looking for a way to keep my teenage son out of mischief, so my husband gave him a sledgehammer and told him to knock down the old wood and perspex greenhouse we never used. 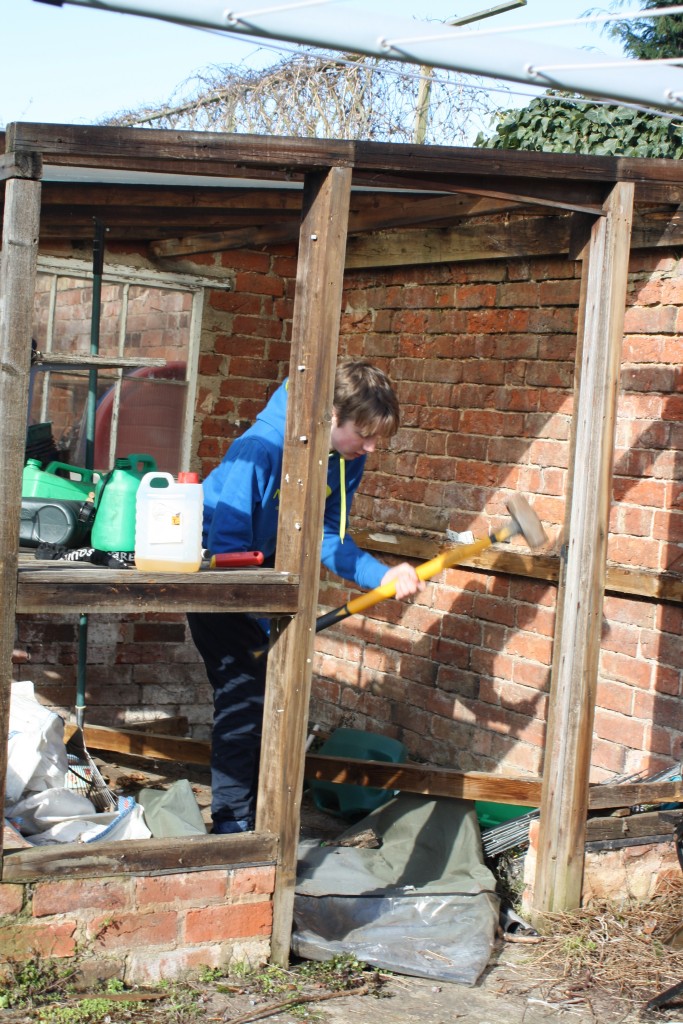 I don’t think there was any plan beyond that, but once the greenhouse was gone, things just snowballed. It seemed that my husband had a new idea practically every week. 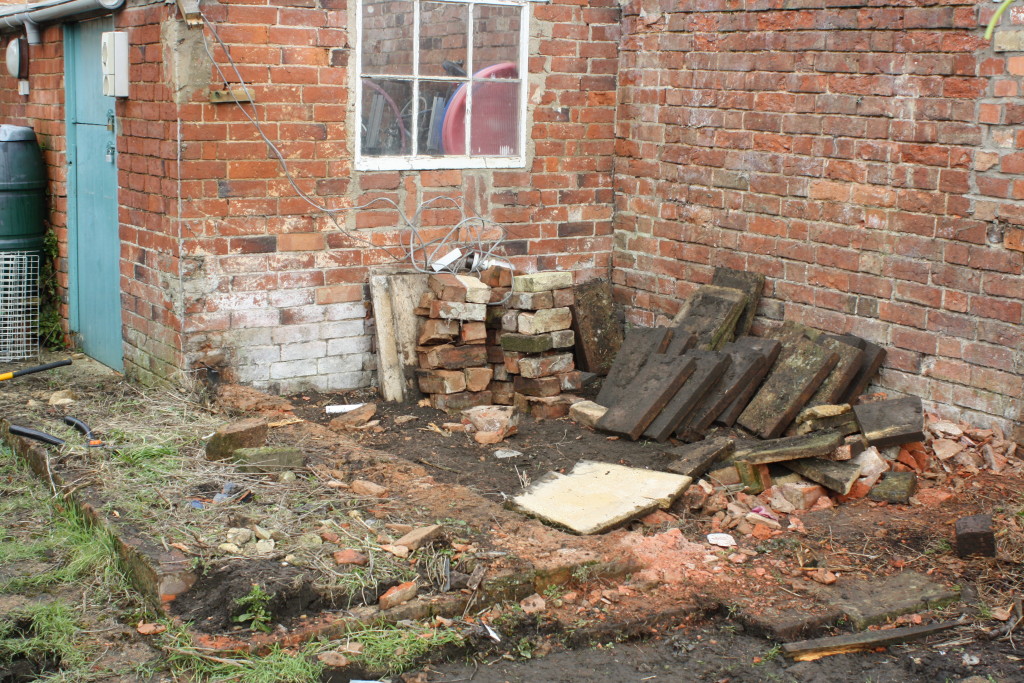 The foundations of the greenhouse proved to be sturdier than expected, so they took some hard physical labour to shift. At the same time, my son knocked down a couple of pointless trellises at the top end of the garden. 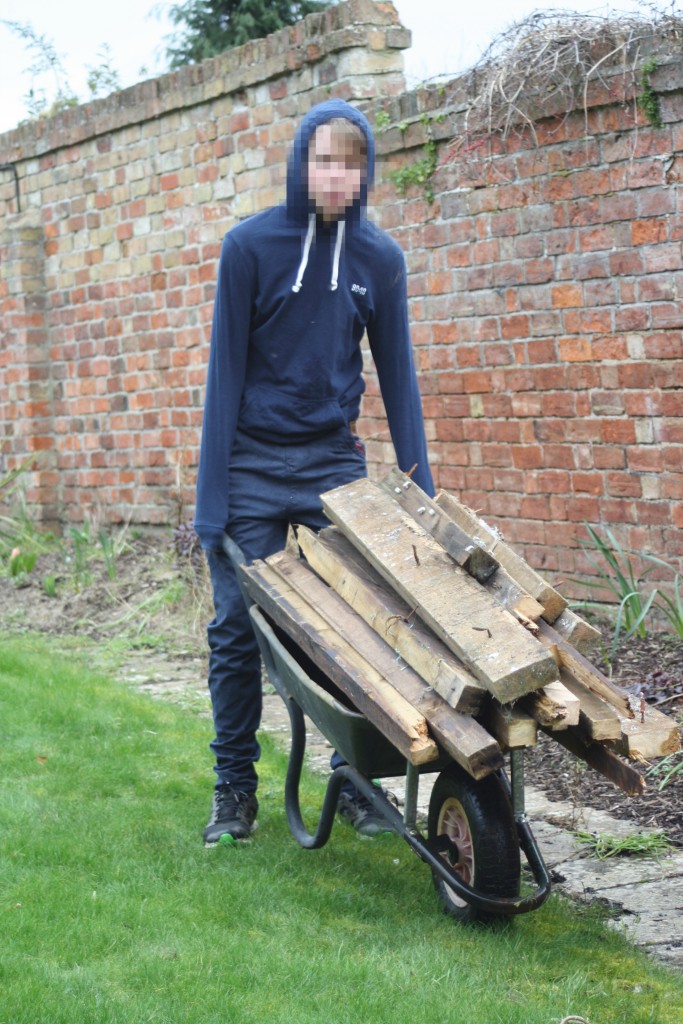 Our garden has three flower beds – one on the left hand side, one on the right hand side and one in front of the house. The previous homeowners had planted the left flower bed and the one in front of the house pretty well, but the one on the right appeared to have once been an allotment area and had just turned into an overgrown mess. We tried to tame it a couple of years ago – my husband cleared the mess and we planted some new plants, but it didn’t work. On the whole, the plants wouldn’t grow and the weeds just kept coming back.

So, with the greenhouse gone, my husband came up with plan B – move any surviving plants to elsewhere in the garden, clear everything that was left, level it all off and put grass seed down. At the same time, he and my son pulled up the small crazy paving path which ran alongside the flower bed and seeded that too. It didn’t take long for the grass to grow (but we had to shout at a lot of pigeons and magpies!).

At the back of the garden, which had alway been unused, there was a dirty patio, with weeds growing through it. During the Easter holidays, while my eldest was ill, my husband and younger son pulled this one up. My son couldn’t have been happier. Smashing slabs with a sledgehammer is A LOT of fun. Once the whole area was clear and levelled, more grass seed went down. 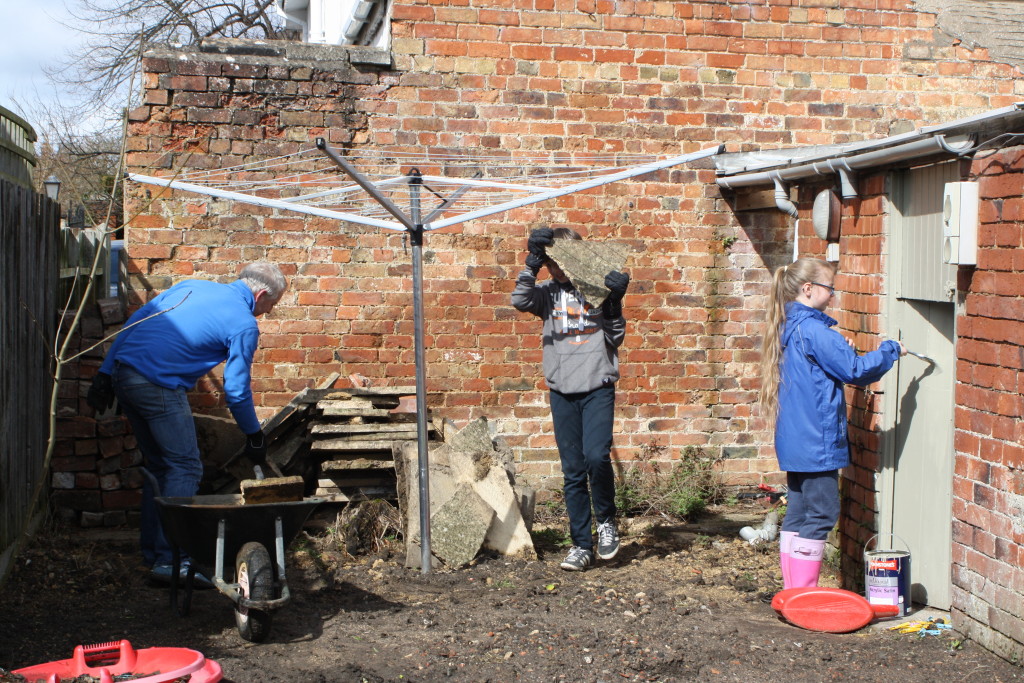 In the meantime, my daughter painted the door and window frame of the red brick outhouse to match the window frames of the house.

At the very front of the house we had another dirty patio and a wide path of patio slabs. My husband initially planned to pull the whole lot up and replace it all with stones, but I had to put my foot down. It would be impossible to sweep up hay and sawdust from the guinea pigs’ hutch if it was on stones. So he compromised on a patio in front for the house , with stones along the path and around the edges of the patio. 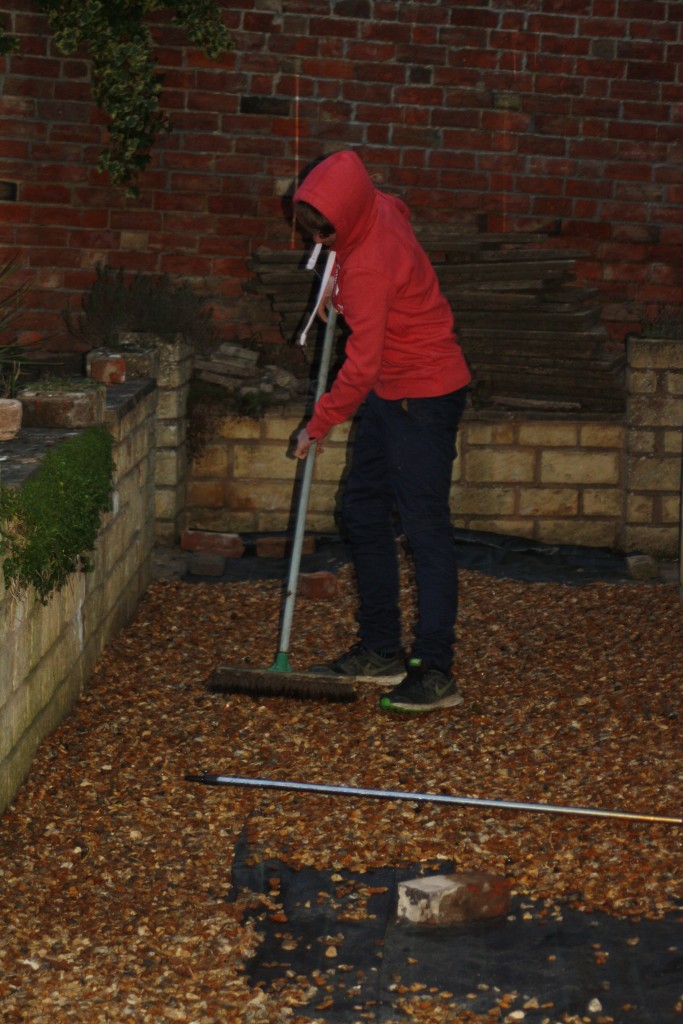 His absolute number one priority when laying the patio and putting the stones down was to get rid of weeds permanently. Once the old slabs were up, he killed any existing weeds and then covered the whole lot very carefully with a dark tarpaulin, before laying the patio and putting the stones down. We used three very big bags of stones to get a nice thick covering and block all light from those troublesome weeds. Another big advantage of stones is they’re noisy – if anyone tries to break in while we’re at home, we’ll hear them! 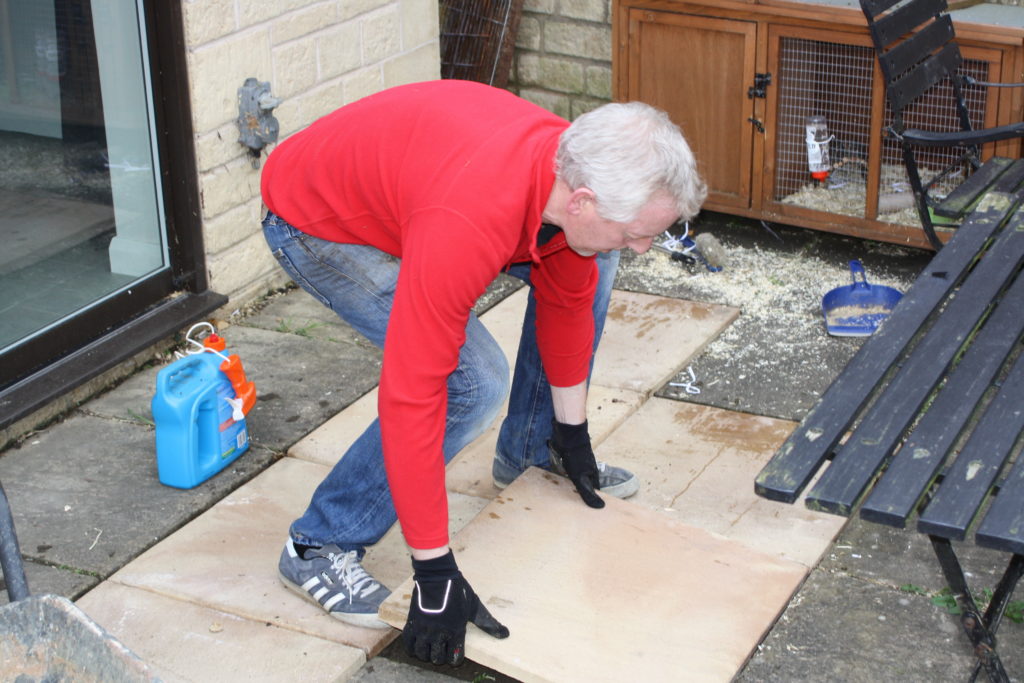 The patio slabs are a lighter colour than the original ones – a beige with a hint of pink. My husband laid six slabs by five slabs and it looks really good. I’ll be honest, nothing about the old garden or the old patio really bothered me, but the new one is SO MUCH BETTER.

With the patio looking nicer, we decided to plant some pots. Luckily, my mum was getting rid of a lot of old ones, so we took them off her hands. They are a mish-mash of designs, but we like that. We’ve never been great at keeping bedding plants alive, but we’re trying hard with these! 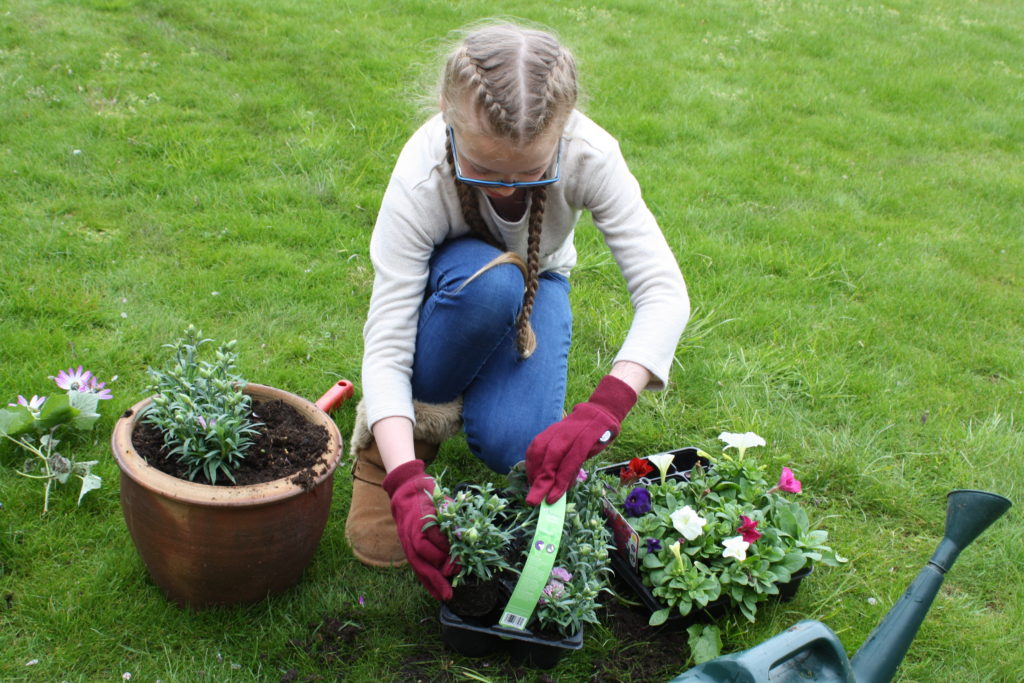 Then it was onto the ‘dark corners’. Behind our gate, was a general dumping ground, which included the previous owner’s compost heap. My husband reused as much as he could elsewhere in the garden and put the rest of it in the green waste recycling. It was a real mess and I was amazed that he managed to get the whole lot clear. Then he covered it with more stones (and black tarpaulin, of course!). 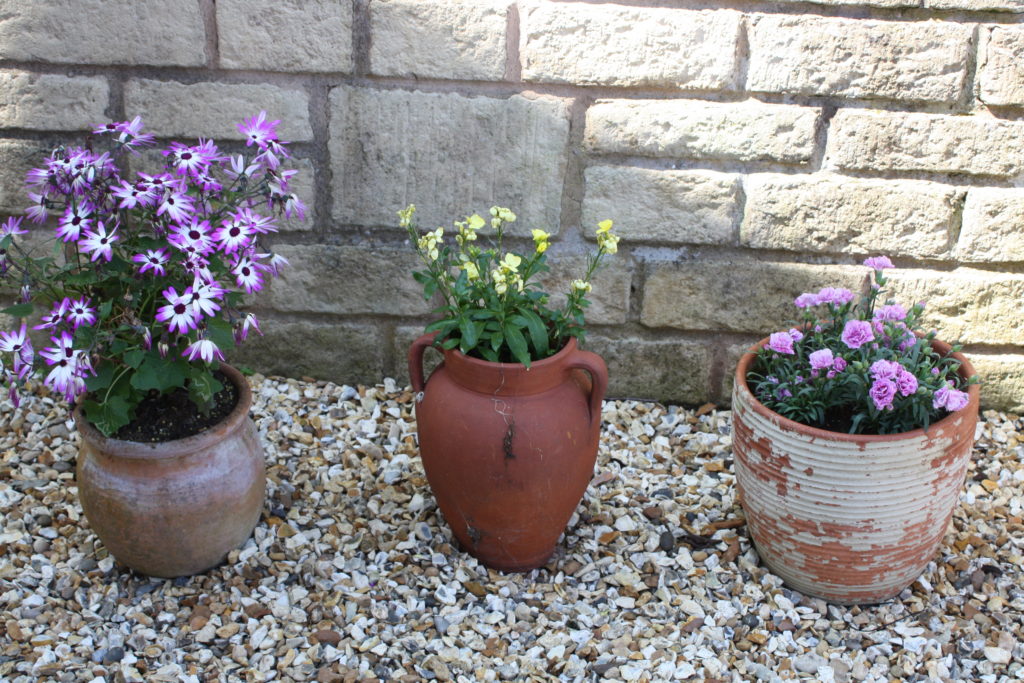 Apart from a bit of stone-spreading and holding the all-important tarpaulin in place, I haven’t got very involved in the garden project, but I did do a bit of fence painting at the end. Some of the fence panels had previously been covered been shrubs and weeds so hadn’t even been visible before. 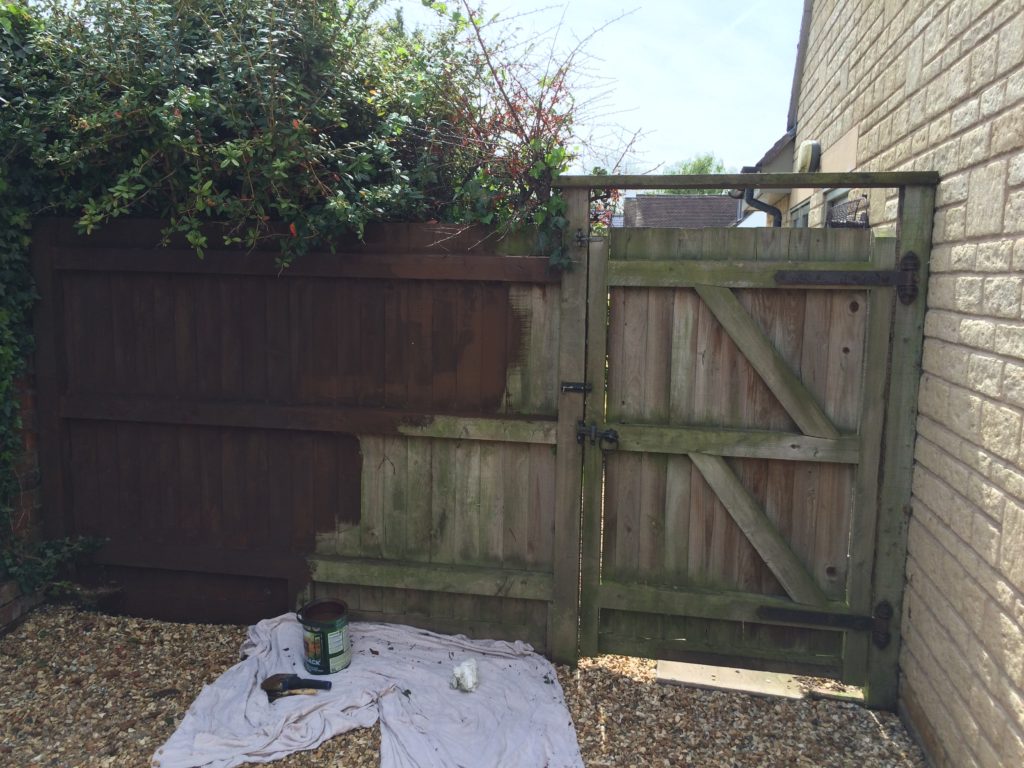 Now we’re on the final strait – clearing the last few weeds from the left-hand flower bed. We seem to have more space than we realised, so we’ve bought some new plants and need to buy a few more. My priority is to get hardy perennials, so they will hopefully survive into next year. 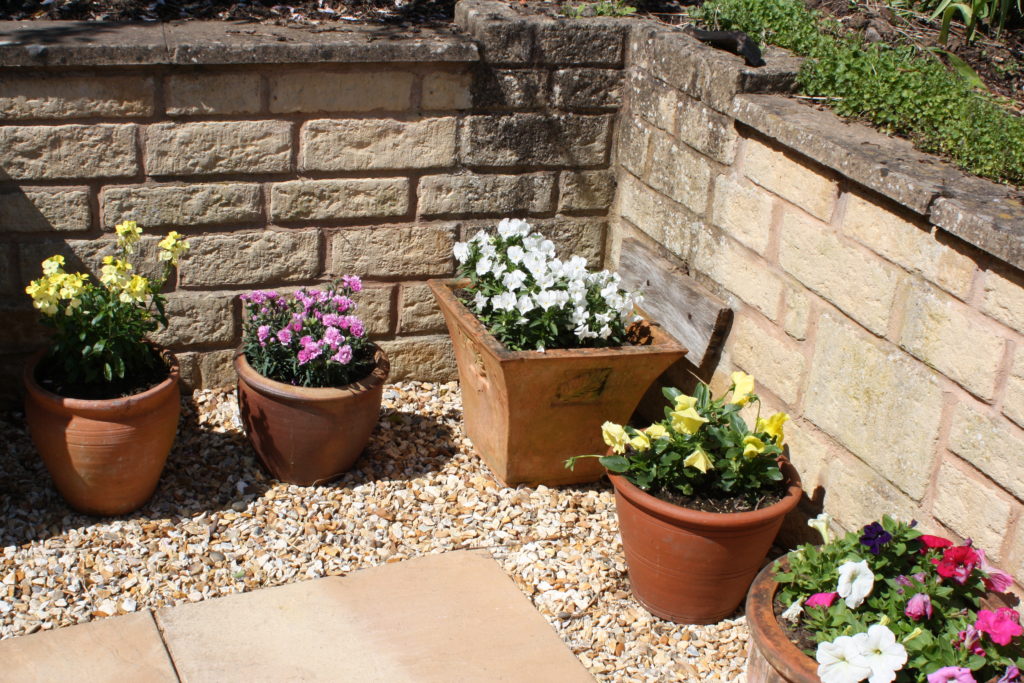 I’m very pleased with our almost-finished garden. I had never realised how much work it would take to transform it – or even that it needed transforming! It’s kept my family out of mischief for a few months and now we’ve got a garden we can enjoy for summer and hopefully for many more years to come. 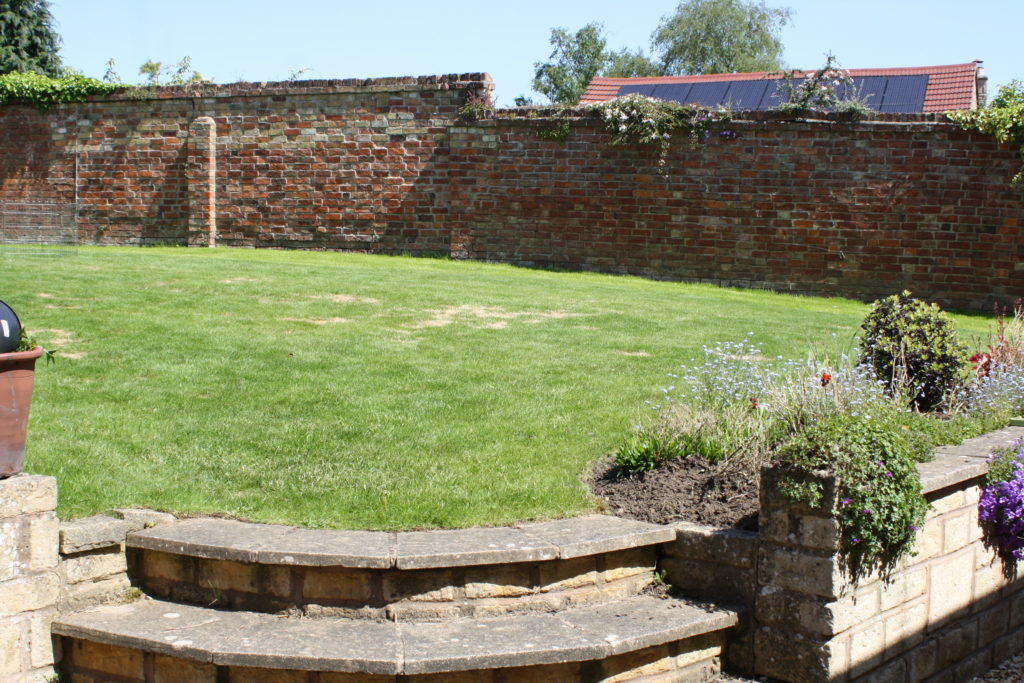 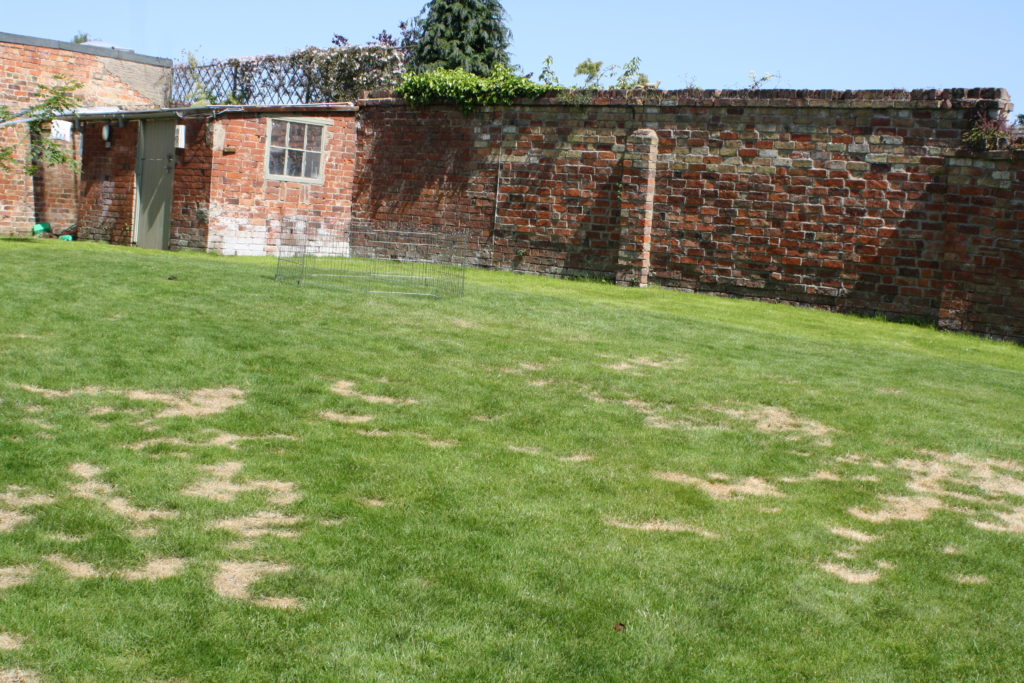 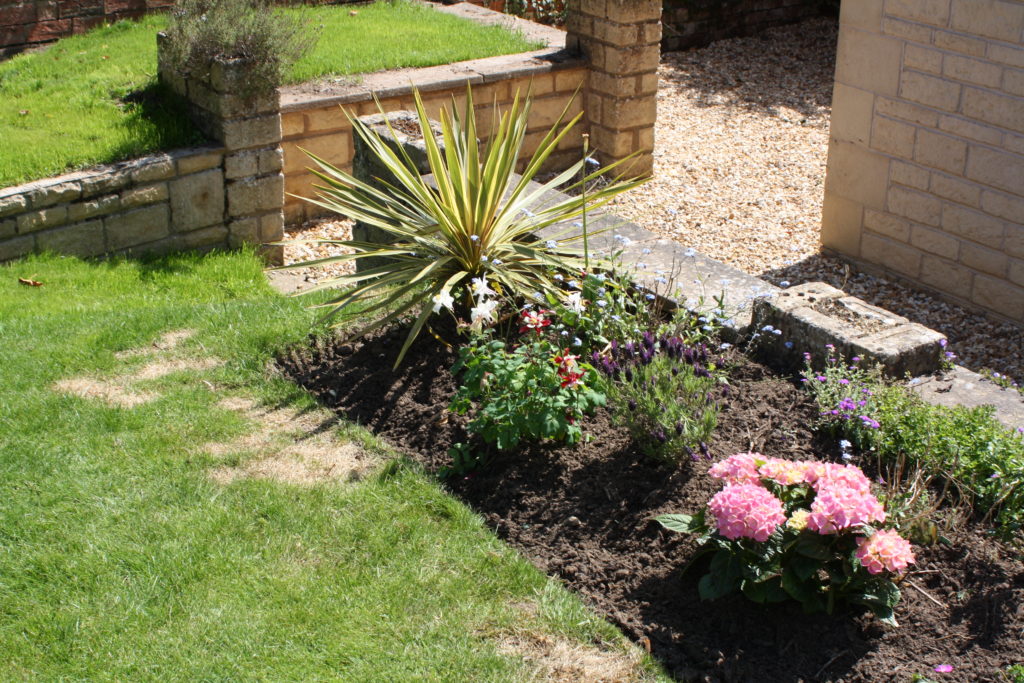