A birthday trip to Dismaland

Living in land-locked Gloucestershire, Weston-super-Mare, at about an hour away, is our ‘local’ beach. We went there as kids and now we take our own kids there. It’s no Cornwall, but it’s nice enough for a day out.

Back in the day, there were times when we didn’t bother with the beach, we just went to The Tropicana for the day. In the 1980s, The Tropicana was the best thing ever – an outdoor pool with twisty slides in the shape of a pineapple. It might not sound much in these sophisticated times, but in those days you really couldn’t beat it.

I miss The Tropicana.

Every time we go to Weston, we wonder if it will ever come back and what they are going to do with the building, still sitting there on the seafront, looking rather miserable. When we went there at the start of August, my husband was chatting to someone ‘in the know’ about what was going on with it. Apparently it was going to be used as a film set. 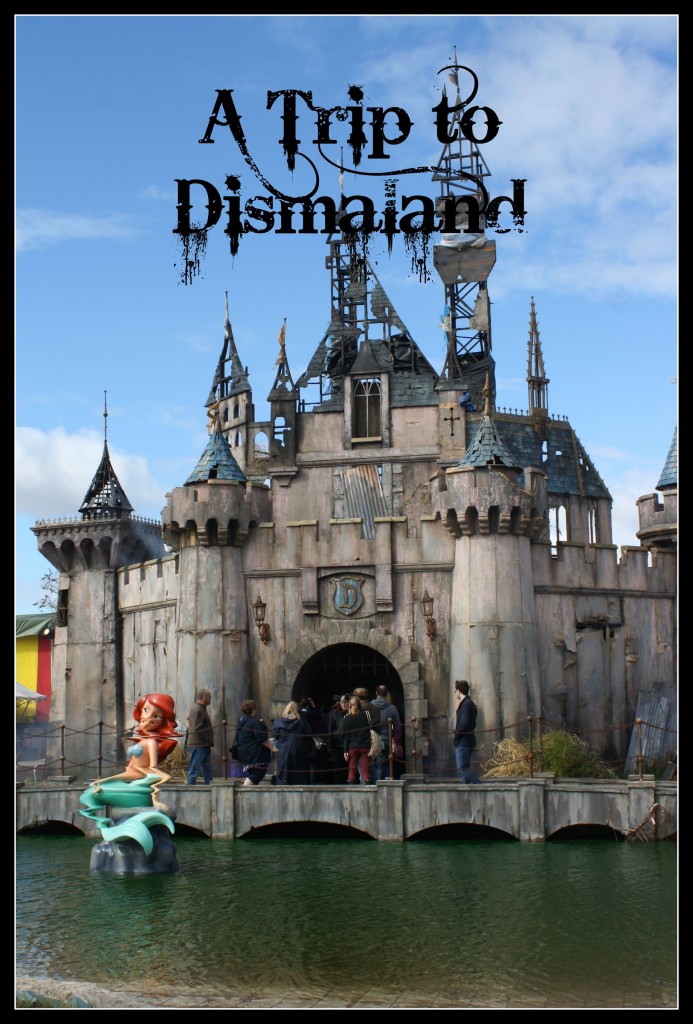 So you can imagine our surprise when just days later we learned it was to be opened briefly as Dismaland – Banksy’s answer to the amusement park. Banksy! Who painted this amazing piece in Cheltenham (which immediately got ruined by total idiots). 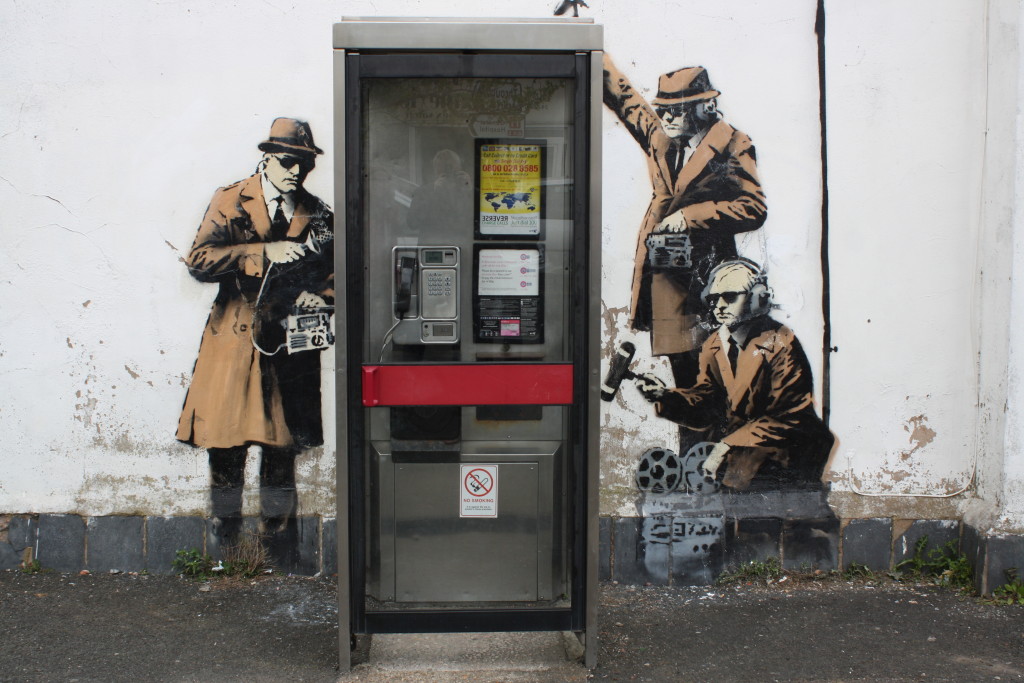 We had to go. Because Weston is our local beach and I used to go to The Tropicana as a kid.

But it turned out we weren’t the only ones who wanted to go. Everyone wanted to go. Not just people in Somerset, Bristol and Gloucestershire. The website crashed with the demand, people queued for tickets and I resigned myself to the fact that I wouldn’t be going.

I turned 42 the other day. We like a birthday in our house and always celebrate in some way. My husband and I usually go out for the day – just while the kids are at school. Where could we go this year? And then I had an idea – Dismaland! I had one shot. There was only one time slot I could do. I was there as the final batch of tickets went on sale. I refreshed. I refreshed again. I wondered how long I would need to refresh for. I refreshed for seven minutes and there they were! Tickets to Dismaland!

My birthday dream had come true.

*Spoiler alert* If you’re lucky enough to have Dismaland tickets for the final days, you may wish to avoid reading this post. I was pleased that I hadn’t seen too much detail about what it was all about.

Even though we had tickets, we still joined a big queue and had to wait nearly half an hour before we got in. There we were ‘greeted’ by Dismaland’s legendary staff, who shouted at people to hurry up and move along and took my husband’s ticket and screwed it up. 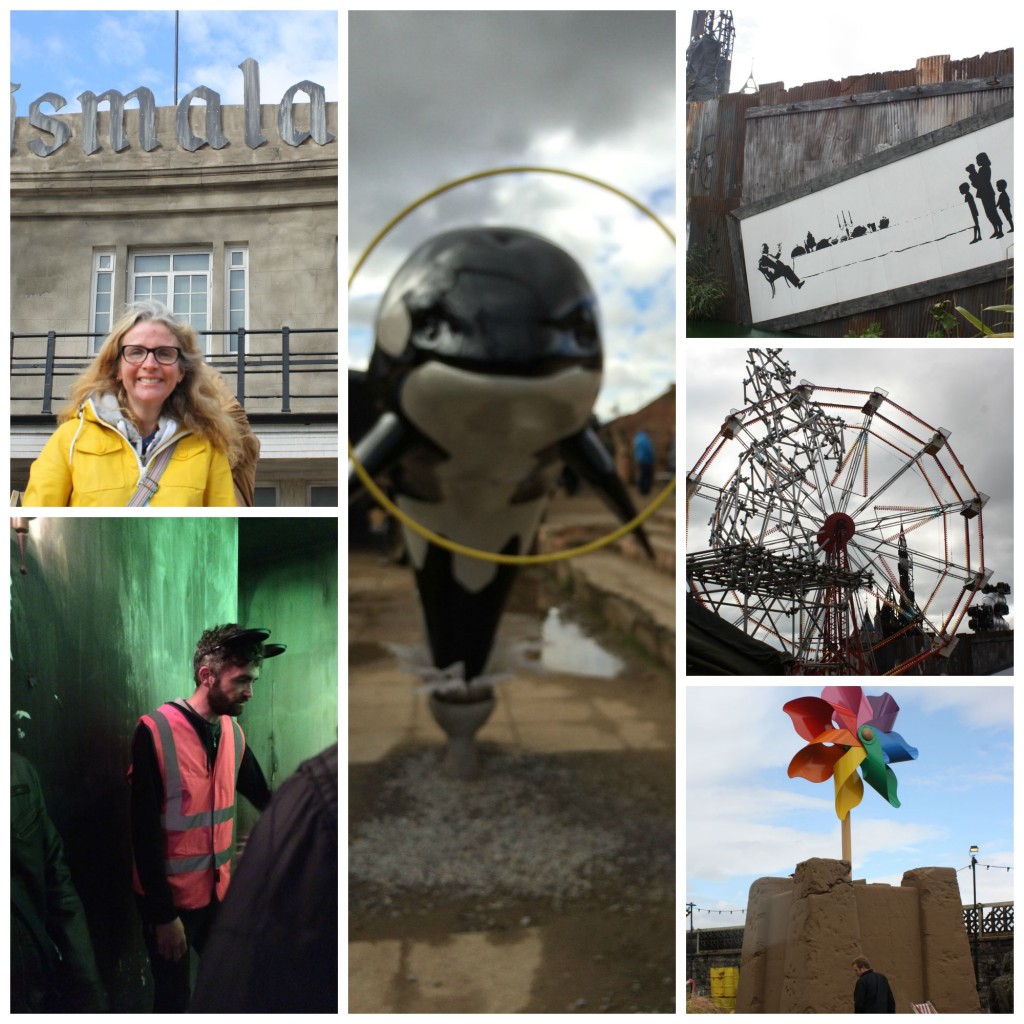 I was expecting Dismaland to be something special, but it was so much more than that. Awesome is an overused word, but Dismaland truly is awesome. It seamlessly mixed the themes of decaying fairground/ theme park with far left politics and comment about man’s inhumanity to man. But was it dismal and depressing? No. It was thought-provoking and, actually, very, very funny.

There were the staff members who split people into ‘ugly people’ and beautiful people, the ‘hook a duck in some muck’ and ‘shoot some tins, win some things’ stalls and humorous films on the big screen.

We started off in the castle. If that was all we did, I would have gone home very, very happy. First you have your photo taken (if you’re not ‘ugly’) and you don’t know why. You’re told to point at the wall and smile. Then you go into the dark castle where bright lights are shining and flashes are going off. Cinderella’s carriage has crashed and overturned. As you walk around it, you see Cinderella’s body hanging out of the window, with two birds trying to carry her to heaven, as the paparazzi snap, snap and snap away. And, when you leave, you realise there’s a photo of you pointing and smiling at Cinderella’s dead body hanging out of her carriage. The amount of thought which has gone into everything is incredible. There isn’t an inch of Dismaland which hasn’t been carefully considered – everywhere there is decay, rubbish, graffiti and destruction. The rusted children’s rides could have been left over from the glory days of The Tropicana. 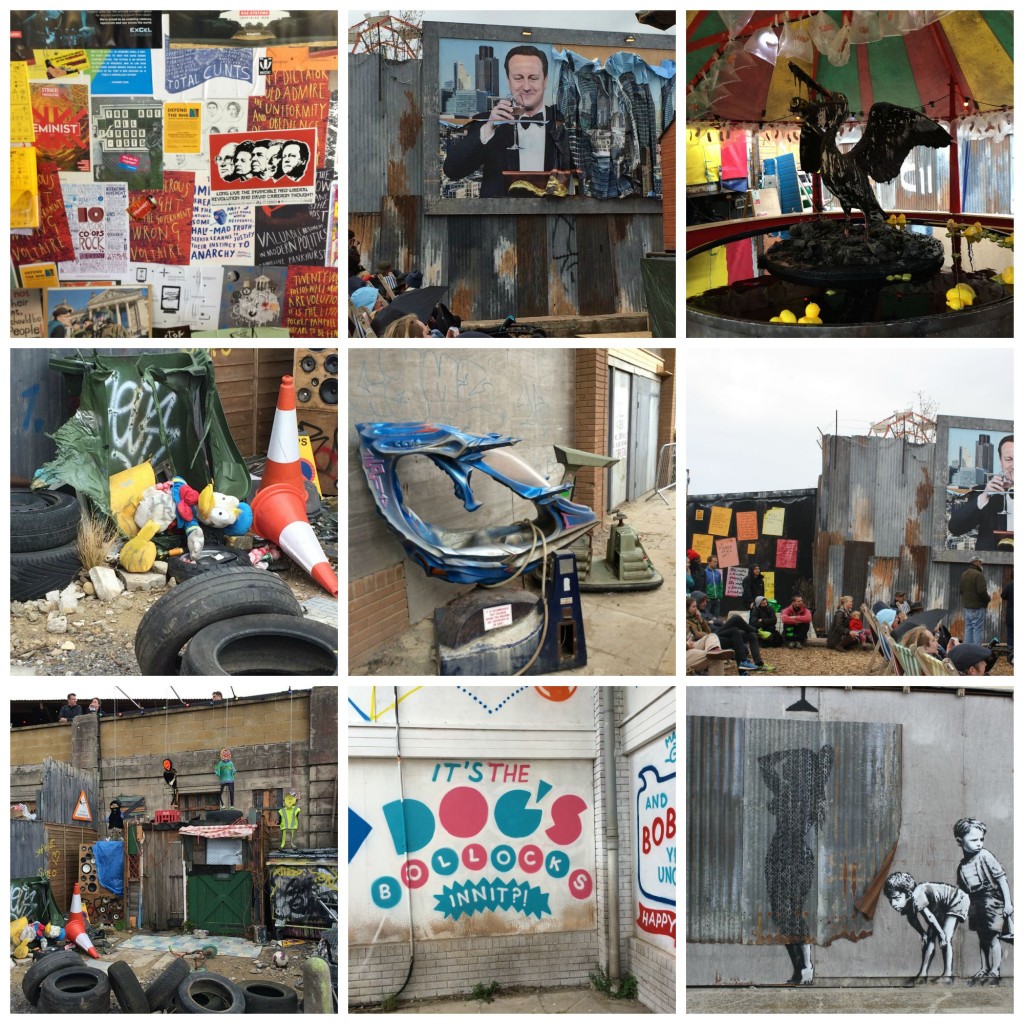 The gallery contains ‘real art’ ie paintings on walls. It also contains the Grim Reaper riding around on a dodgem to the sound of Stayin’ Alive. I was fascinated by the large ‘model village’ of urban and rural destruction in which thousands of tiny police officers attend every disaster imaginable. 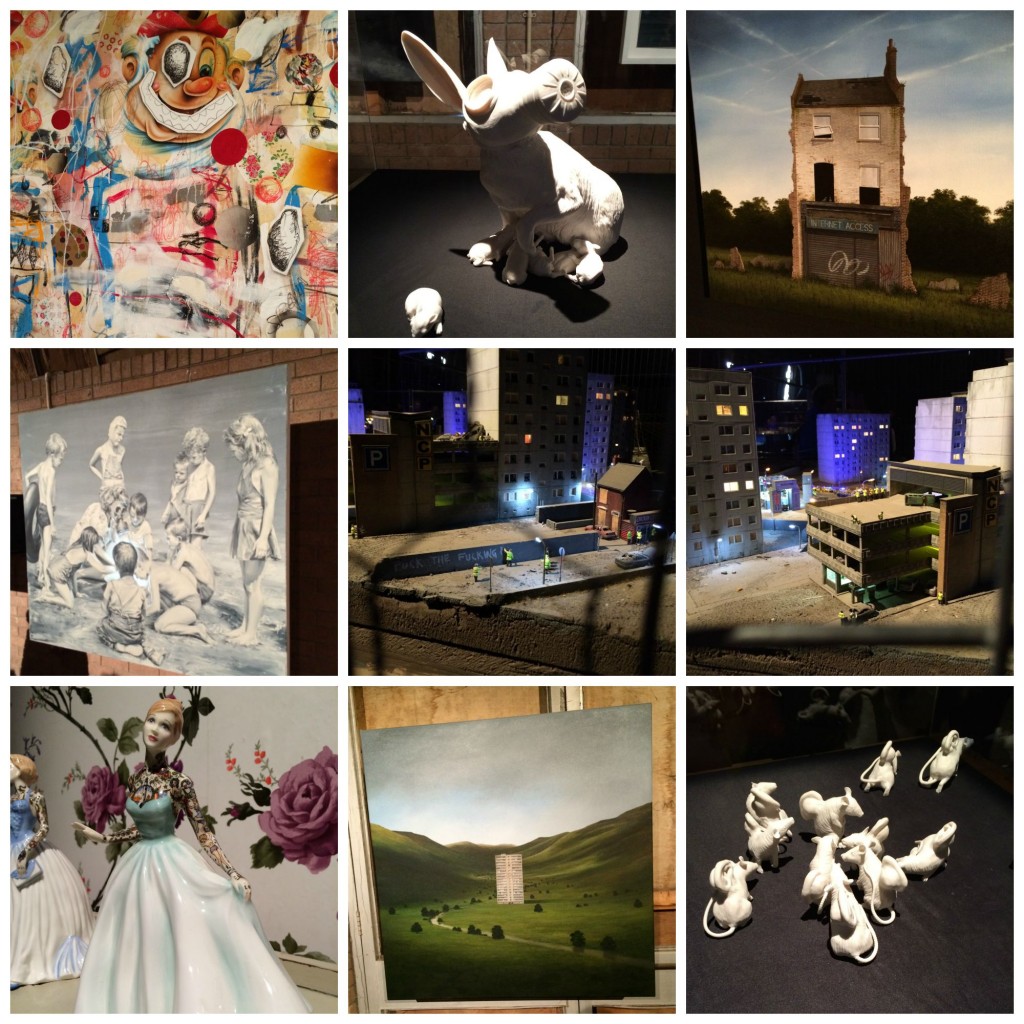 The ‘migrant boats’ you may have seen on TV were truly moving. The motorised boats, the sort controlled by kids with steering wheels on the edge of the water, contained the saddest human figures. Even worse than the people in the boats were those floating face-down in the water. 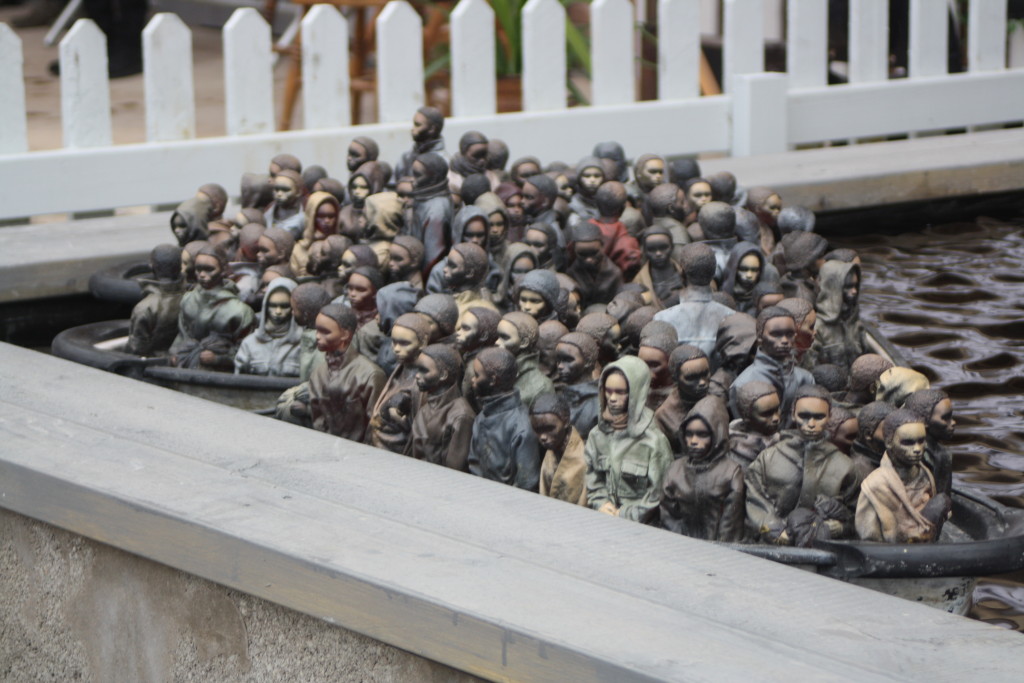 There is so much to see at Dismaland. It was far better than I ever imagined. We definitely could have done with staying for another hour. I’m so glad I was able to experience it for myself for my birthday. 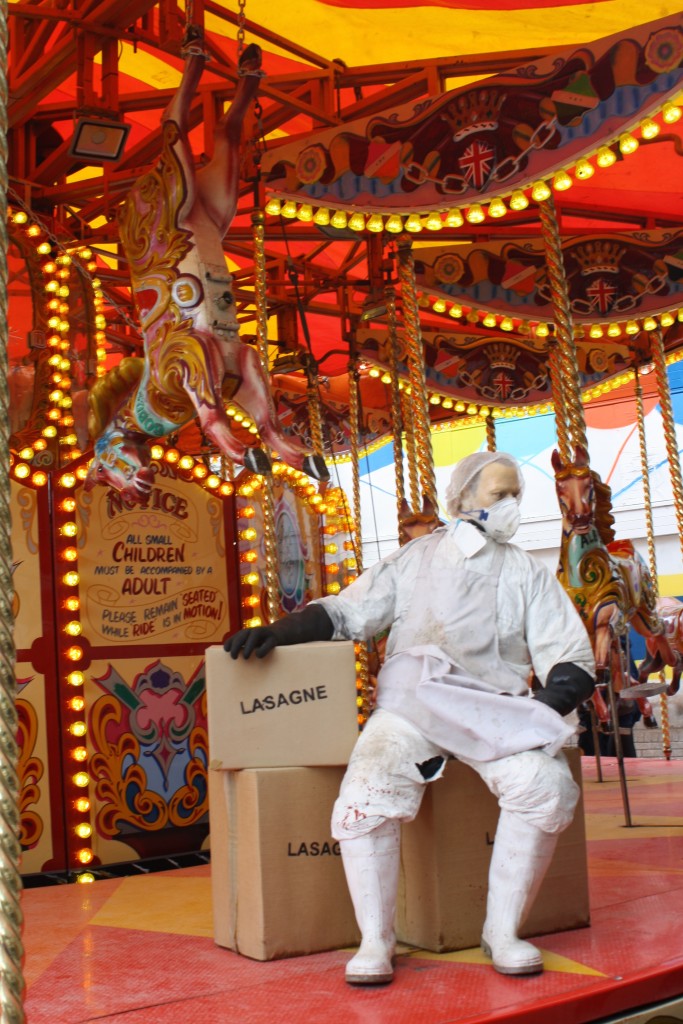