The ups and downs of flying with my daughter

Home » Family » The ups and downs of flying with my daughter

My daughter has been watching the ITV programme about Virgin Atlantic. When my daughter takes a liking to a programme, she watches it obsessively. She watches it over and over until she can recite all of the words. She talks about all of the people as though she knows them and I should know them too.

When we flew to Amsterdam I really didn’t need her to have watched that damn programme.

I’m a bit nervous of flying anyway and had taken my Diazepam for my claustrophobia, but I still have to get myself in the zone and try to block out worrying thoughts.

When were on the plane for Amsterdam waiting to take off, my daughter started telling me about ‘brace, brace, brace!’. I didn’t need to hear that.

I did my breathing exercises for my claustrophobia. It was getting a bit hot on the plane and my daughter was chatting on and on about the cabin crew on the programme and the various issues they’d encountered. I didn’t need to hear it.

Nor, as it turned out, did she. She was scaring herself as well as me. But still she wouldn’t stop.

We talked about how rare plane crashes were. I told her about my friend who is cabin crew and has been flying for 20 years without any problems. Trying to convince myself as much as her.

We watched the safety demonstration and then they told us to look at the card. I told her we didn’t need to look at it.

‘But they told us we had to look!’

So we got the card out.

‘What does it all mean?’

So I had to talk her through it.

And then she was crying.

I wondered if she was feeling sick (my daughter is often randomly sick), but it was just nerves. It was a feeling she didn’t recognise. She had scared herself with her chatter about the silly programme.

And then we were above the clouds.

She’s got an old iPhone with no SIM card that she uses just as a camera. The phone came out and she was snapping picture after picture out of the window. She had to take selfies of herself on the plane. It was the best thing in the world.

We hit turbulence, but she didn’t mind as the pilot had explained it was raining and that would happen. She’d been dreading her ears hurting on the way down, but they didn’t.

She loved seeing the sea and the boats, flying over the beach and seeing the city coming into view. We looked for the boys’ camp, but we couldn’t see it.

After her initial wobble, she absolutely loved her flight. Then she loved her train journey into the centre of Amsterdam, where she saw a double decker train and ate Burger King on the station (classy, I know!). It’s over two years since she had last flown and it was amazing how much she’d forgotten. It was like a whole new experience for her. After her initial wobble, it was a fantastic experience for her. 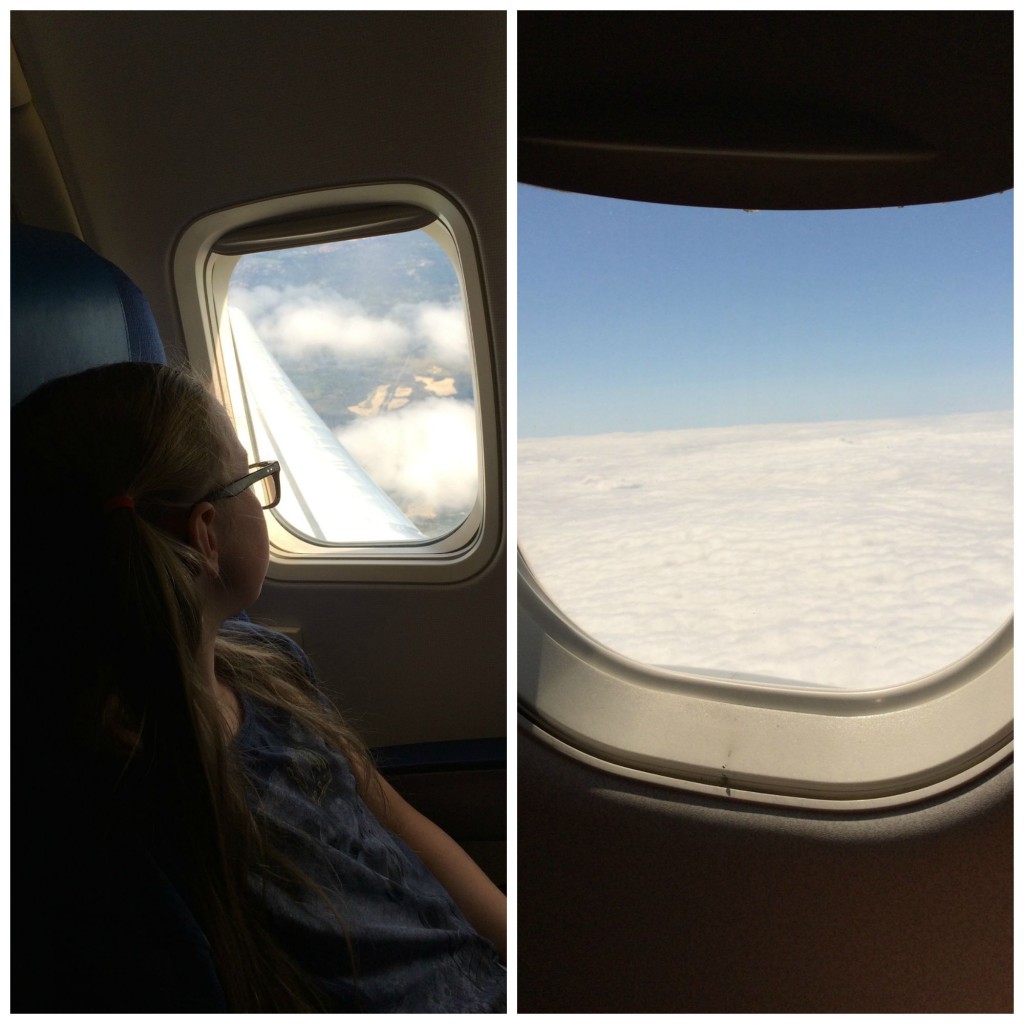