I’m pretty rubbish at stuff. When I think about it, my skills are restricted to basically writing, running and getting kids organised and out of the house on time. And, to be honest, I even struggle with that one sometimes.

I seem to lack the basic skills and knowledge for life in the 21st century. And I don’t have basic stuff that most people take for granted.

It wasn’t always like this. As a teenager, my parents and teachers predicted I would go far. I went as far as a spare room in my own house, where I write press releases for other people and edit their English.

Sometimes I feel as helpless as a 6 year old child. Only trapped inside the body of a 41 year old woman with very bad skin.

Talking of skin, for instance, a fellow acne sufferer told me about a vlogger who does great make-up tutorials about covering up spots. I’ve had spots for 30 years and I’ve never covered them. It’s never even occurred to me. So I’ve basically spent 30 years needlessly looking crap.

A side effect of the Roaccutane to improve my skin is hair that looks like straw. Most people wash their hair to get rid of grease, I wash mine to moisturise it. I posted a pic on Instagram and a couple of real life friends made suggestions of how I could improve it.

How do they know this stuff? How come I don’t know this stuff? I realise I stopped learning about hair, skin and beauty at the age of 15. When I stopped reading Just 17. Apparently you learn this stuff from friends, sisters, magazines and hairdressers. I gave up going to the hairdressers a couple of years ago, and never went for more than a trim in the first place. I don’t talk to any real life human beings any more who aren’t closely related to me, as I work at home alone, so there’s nobody to give me friendly face-to-face advice. 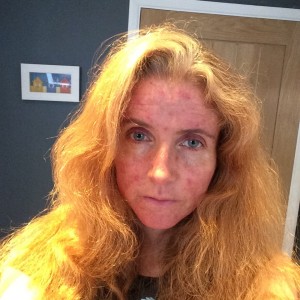 Last week, I was asked at the last minute to leave the house for work. I knew I’d have to do it the following week and I’d made peace with that, but this was something different. I didn’t have time to mentally prepare. I would be facing two of the biggest things I’m no good at all in one go – namely driving and finding my way.

I’m a crap driver and I hate going strange places and will almost inevitably get lost. Getting lost will make my driving worse. Oh, and I don’t have sat-nav and I can’t read maps on my phone. Because that’s what normal people do, not people who are crap at stuff.

I suspect I may have panicked slightly over the phone, seeking reassurance from a woman half my age.

I stopped short at asking, ‘But what should I WEAR?’. I am both too young and too old to need reassurance and help from people to whom I should be demonstrating a mature and able persona. But I really didn’t know. I haven’t worked in an office for nearly 18 months. I don’t have work clothes any more. My work clothes weren’t that much like work clothes even when I did have them. I can’t just put on a black top or a white shirt. Basic things that people have. Because I don’t have them. I am rubbish. My wardrobe is full of Superdry Tshirts.

I wore black jeans, green Converse and the smallest of Superdry logos on my dark grey Tshirt.

I had to go on the motorway and everything. I don’t go on motorways. Because I’m a bit rubbish. I think my husband always thinks I won’t make it home in one piece if I’m allowed on motorways.

So I made it there and came back in one piece, in 27 degree heat, driving my oven of a car which has broken air conditioning (another thing that makes me crap) with my window down on the motorway.

I am still alive. My hair is a mess and so is my face. I have no normal clothes, no sat-nav and no air conditioning in my car.