How to Build a Girl by Caitlin Moran

Home » Book Reviews » How to Build a Girl by Caitlin Moran

How to Build a Girl is Caitlin Moran’s first work of fiction and it is every bit as funny as her non-fiction. Possibly funnier. She makes it clear that it definitely IS a work of fiction, but it doesn’t take a rocket science to work out that it draws heavily on her own unusual early life – being about a big family growing up in Wolverhampton and a teenage girl working as a music journalist in the early 1990s. It also has a lot in common with Raised by Wolves, the hilarious Channel 4 sitcom (definitely the funniest thing on TV so far this year) she wrote with her sister, Caroline.

Johanna Morrigan is fed up of her life as a fat teenager living in poverty. So she decides to rebuild herself and make her life better. Johanna becomes Dolly Wilde, outspoken music journalist.

On the way to a better life, she discovers booze, smoking and sex – and that journalists can get free CDs and don’t have to pay 20p to borrow them from the library! Dolly has no filter at all and the things she says will shock you and make you laugh in equal measure. As will the hilarious sex scenes, which are like nothing I’ve ever read before.

Between her sex and booze and being-horrible-to-rock-stars shenanigans, she goes home to Wolverhampton to irritate her older brother and listen to her dad talk about his own dreams of becoming a rock star.

This is a very funny book and well worth a read. Even more so if you were a teenager in the 1990s because just a little tiny part of you might relate to Dolly/ Johanna. 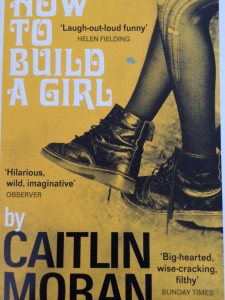 It doesn’t have blue spots on the cover – I spilt nail varnish on it!