I’ll cut right to the chase here. Gone Girl is an incredible book. I wasn’t really aware of it, apart from I’d heard of the film, but neither the film nor the book had particularly interested me. But then a family member, who is a fellow Jo Nesbo fan and therefore assumed we had similar taste in books, gave me a copy as he had mistakenly bought it when he already had one at home.

I was gripped from the very first sentence. The writing is impeccable, the pictures it paints in my head were so real and vivid, and the story was just fascinating. I kept turning the pages. I had to know what was going on.

Nick and Amy are a married couple. Once very happy, but over the last couple of years, they have both become less happy. Less nice.

On the morning of their fifth wedding anniversary, Amy disappears from home. Her doofus of a husband is mystified as to what has happened. Or is he?

Neither character is particularly likeable, but is Nick just a bit of an idiot, or has he done away with his wife?

The strap line is There are two sides of every story… The story is told from both Nick and Amy’s points of view, but it turns out that there is a lot more than two sides to the story. There are twists and turns along the way, as Flynn reveals more and more about Nick, Amy and their life together. The twists just keep on coming and this reader certainly couldn’t see what was going to happen next!

Gone Girl is a brilliant book and I would recommend it to anyone who loves well-written page-turners, whether or not crime fiction is your thing.

Funnily enough, I just discovered we have two copies at our house too! Apparently my eldest bought one from the Scout’s jumble sale. 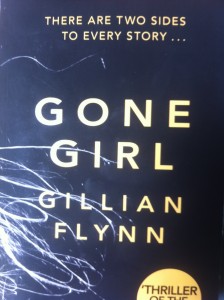