My daughter’s ballet school does a show every couple of years. The ballet school is a one-woman band, so the show is a massive undertaking with choreography, costumes and all the logistics and administration to sort. The kids had been practising their routines since the exams in the autumn. My daughter had four routines – two for her ballet class and two for her tap/ jazz class. She’d really been looking forward to it and I was terrified that she might not make it with her bad foot – she’d had to miss a few lessons and just watch. Luckily she’s a quick learner who retains dances well and had remembered her routines perfectly, despite going over a month without actually taking part in her tap/ jazz class.

The show was every bit as beautiful as I’d hoped. From the cute little puddings dressed as insects in tutus, smiling and hopping round the stage, usually out of time to the stunning teenage girls en pointe. How could I well up at the sight of someone else’s teenage daughter, someone I’d never seen before, dancing en pointe? I could! It’s just the sheer beauty and skill of it, combined with the knowledge that it’ll be my daughter in a few years.

In the first half, my daughter danced a ‘garland’ dance with her class – in peasant dresses and character shoes. It was very cute. Throughout the first half, there was a story running with the older girls, interspersed with the younger kids’ routines. The cute little ones had all their routines in the first half too, always getting the biggest round of applause. Because who needs skill when you’ve got downright cuteness?

In the second half, the pace hotted up a bit. No storyline and no little ones. It was all kids in year 3 and above and the routines were coming thick and fast.

My daughter’s tap class kicked the second act off, dressed as old people. It was a comedy routine, with them sat dozing in their chairs, then coming to life and going a bit crazy dancing and performing a conga, before sneaking back to their chairs to doze. My daughter had opted to be an old man for this dance, complete with ‘bald’ wig.

Next up was her ballet class doing a routine to Flash, Bang, Wallop What a Picture. Most of the girls were dressed in big, old-fashioned dresses, but my daughter and one other girl were dressed as Victorian men in suits and bowler hats as the photographer and his assistant. My daughter really shone in this dance, her skill, her strength, her smile and comic timing. Maybe it’s just because I’m her mum, but she really stood out as something special.

Her final dance was her jazz routine to Hey, Baby – a song which I have always disliked intensely. The girls were all cheerleaders and my daughter was slightly fed up to be the only one not in a shiny purple leotard and matching skirt. She was dressed as a, very male, American football player. But seeing the dance come to life, it all made sense. She was the lead. She was the one who wanted to know ‘If you’ll be my girl’.

The comic timing was there again, the little solos, the stunning smile, the strong legs, the sharp moves. It was all there. Perfection.

And, suddenly, I didn’t hate that song any more. I loved it. And so did the rest of the audience. They sang along. The only song in the whole show they’d sung along to.

And my girl was the star.

I was so proud of her. The show was beautiful. A real credit to my daughter’s teacher and the dance school and my daughter had done her absolute best as ever and shone like the little star she is.

She was hot, tired and a little bit grumpy as we left. It had been a long day.

‘Well done! You were really good!’

You know how you know your daughter really is as good as you think she is? When total strangers congratulate her on her performance. 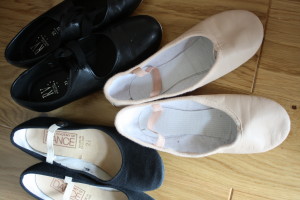 I’m gutted to have no photos of my daughter in her beautiful costumes, so here’s her dance shoes!