At 4am on the last day of school before half-term, my daughter came into me and told me she had a bad headache. This never happens. My kids feel ill when they wake up at normal time, or maybe in the early evening. I gave her some Calpol, she lay down in our bed for a bit, then went back to her own bed and woke up fine.

I thought no more of it until the phone went at 11.30 that morning. It was the landline,so  it’s surprising I even answered it because it seems to exist purely for nuisance calls and people phoning in sick to Tesco at approximately 10 to 7 in the morning. It was my daughter’s teacher. She was worried that my daughter, who never moans, had a bad headache. It was a fun day, with circus skills, and my daughter was refusing to go home. So I took some Calpol to her at school.

At 4am the following morning, she was in again. With the headache and this time she had a temperature too. This time she didn’t go back to her own bed.

When she shrieked ‘I don’t want to die here!’ it was time to do something.

OK, so she wasn’t going to die, but she was distressed. So we stuck her in the shower to breathe in the steam. It was a sad sight – her face streaked in snot and tears, sitting in the shower because she didn’t have the energy to stand. But she stopped coughing and, even though she still looked distressed, she was happy and stayed there for half an hour.

She shared a bed with me that night, so I didn’t sleep well. She had a temperature of 39.8 at 3am. I gave her Calprofen and she was straight back to sleep. I gave her Calpol in the morning and she went straight back to sleep. But she was fed up. She always gets to the point where she’s fed up of medicine. She starts to fight me and shout at me. She doesn’t realise it’s the temperature talking and not her – that the medicine will make her feel better and calm her down again. She always hated Calprofen. Now she’s decided she likes Calprofen, but hates Calpol. So every time the Calpol comes out out she starts to protest.

On Sunday morning I left her with Daddy and went for a run. I got home to a daughter sat on the toilet looking like death warmed up and clutching the sick bowl. She’d headed for the toilet, everything had gone black and she’d been sick. She was pale and looked so weak.

She didn’t want anything to eat and would only drink water, which is strange for a girl who doesn’t even like water. Tissues were her constant companions, along with the remote control. For once she was allowed to watch all the reality TV shows she’d recorded. 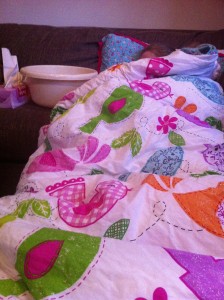 My daughter has a way of going to bed between 9.20 and 9.30 every night, however hard you try to get her to go to bed earlier. But she was asleep in my bed well before 9. At 11.45 her temperature was well over 39 again and I had to give her medicine. Between coughing and crying, she was able to shout and scream at me – she didn’t want medicine, she was tired and just wanted to go back to sleep. I was tired too, and it was dark, so I overflowed the spoon and Calprofen went all over her and the bed, so I had to change her pyjamas and turn the duvet round (I couldn’t be bothered to change that in the night!).

She slept until 10.15. I had high hopes. Surely she’d slept it off? She was pale and tearful and had to be supported to go to the toilet. She just wanted to get straight back into bed where I read to her. She didn’t get out of bed until 12. She was distressed because her brothers were going out with my parents, sister and niece to a museum. A museum! None of them would usually want to go to a museum. She was crying and felt like the whole world was against her and nobody cared about her.

But later on, she did seem a little bit better in herself, although she still didn’t want to eat and still wasn’t drinking enough. She was smiling and made it off the settee to walk a few steps.

I know it’s not life threatening and fundamentally that’s all that should matter, but it’s so hard to see your child ill and upset like that and to wonder when she’s going to feel better. But suddenly it looked like the whole of half-term was going to be wiped out.