Smashing the kitchen wall down

Before we moved into our house, getting the kitchen done was my husband’s number one priority. The kitchen was, and is, a 1980s nightmare. I’m pretty sure that the cupboards are the exact same ones which were in my mum and dad’s house when they bought it in 1981. Which they removed in 1991. Our house was built in 1987, to what was then a pretty high spec. But nothing was done to it for 27 years and to say it looked dated would be an understatement. 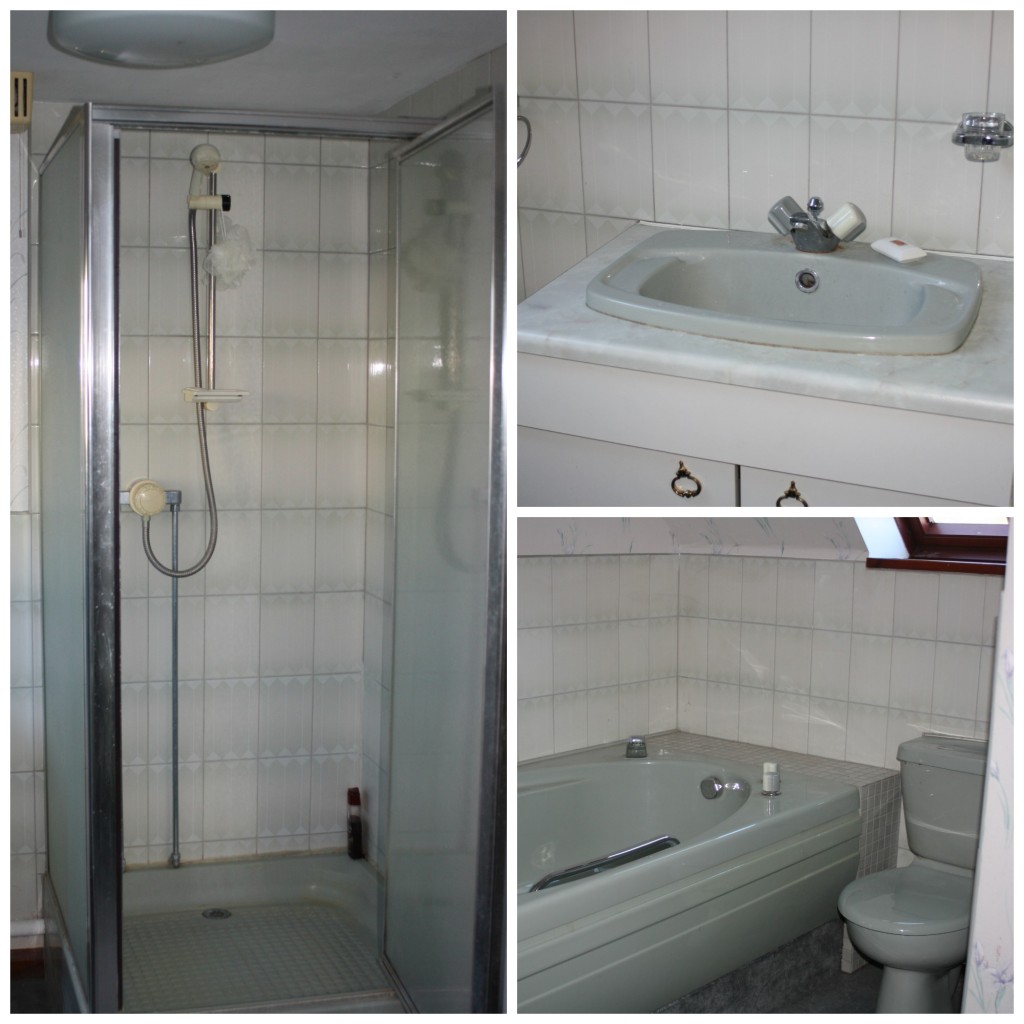 Also, getting a bathroom done is cheaper than a kitchen, so we got a new bathroom, with the kitchen planned for 2015.

Our sink had a waste disposal unit (gross!), which we switched off soon after moving in. When it was switched off, it made a loud and rather scary bang and the sink hasn’t worked since. You run the tap, the water goes down the plughole, straight into the cupboard and out of the cupboard onto the floor.

I’m sure you will agree, that’s not an ideal situation.

So we permanently have a plastic bowl in the sink, which frequently gets emptied in the utility sink (yes, we’re lucky enough to have a utility, but it’s the one room worse than the kitchen, well, apart from the ensuite).

The oven has to be turned up to 250 to cook anything and cooking times are generally double what is suggested on packets. Things at the back right of the oven will be burnt to a crisp, while items at the front remain white, soft and floppy.

The hob doesn’t like first time. The back rings normally light if you blow on them. The front rings normally require lighting from the back rings. Matches would be sensible, but I prefer bits of cardboard ripped off cereal boxes.

And that’s just the functional (or non-functional) stuff. The decor is a whole different matter. The floor is some sort of lino in a hideous colour and design. Twenty eight years of dirt are ingrained in that lino and no amount of bleach is ever going to get it out. It is so hideous I refuse to stand on it with bare feet.

So, in short, we need a new kitchen. 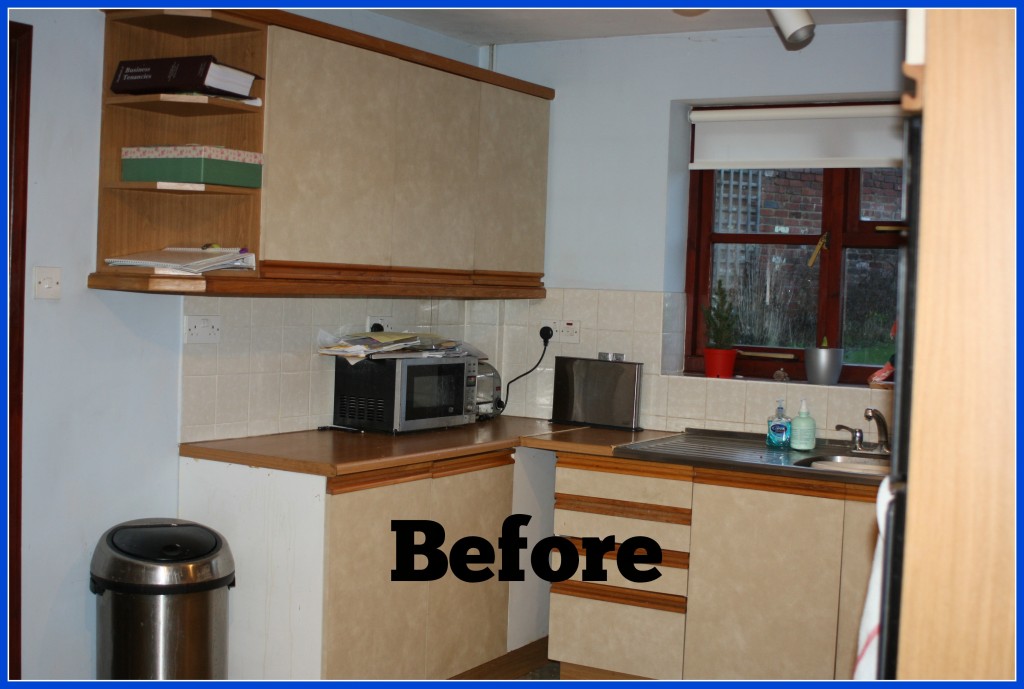 We’re going one step further and making a large kitchen and dining area. The guy who fitted our bathroom (and did an AMAZING job) is going to fit the kitchen, but in order to get accurate measurements, it’s best that the wall is down.

So that’s where we are now. The wall has been smashed down.

Noise, dust and not being able to access anything in the kitchen are not good.

The dust sheets were an annoyance, but nowhere near as much of an annoyance as the dust would have been had it spread (there was still a fair covering, though, throughout the downstairs). The day the wall actually came down there was a thick fog and the NOISE! I sat in the spare room upstairs with the door shut and my hood up to try and block it out. It didn’t work.

Thank goodness I had the foresight to at least rescue my water jug from the kitchen on day 1. On day 2 I remembered to rescue a few glasses so the kids could have a drink when they got in from school. Sadly I couldn’t really rescue the microwave and the fridge and take them upstairs so I could have my lunch. So I either went out for my lunch (not a bad thing!) or round to my mum’s.

On day one, we had McDonalds for tea, on day two, we all had microwave meals. On day three, I braved using the oven. What will it be like when we actually don’t have an oven or hob? I know for a fact I can’t cope with McDonalds and microwave meals for two whole weeks.

So it was four days. It all looks pretty unfinished, as the finish will be done when the kitchen is fitted properly. But I do like the extra space and light. I’m sure we won’t regret having the wall taken down.

I have done my best to remove the dust from everything and we can now use our crappy oven again. And in a few weeks’ time, the REAL work starts! 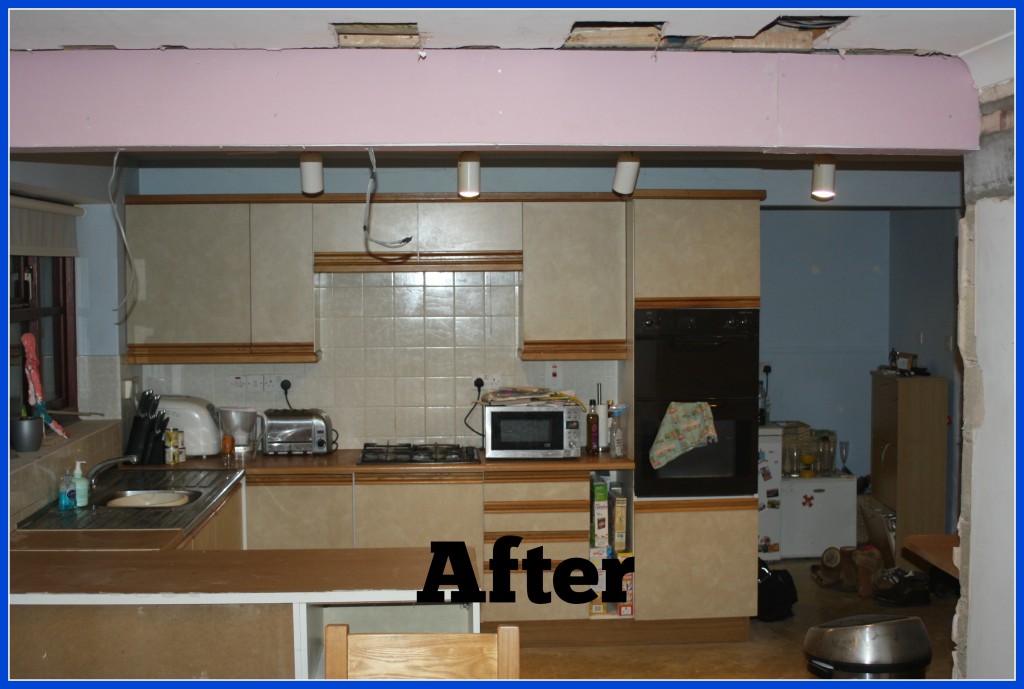