I suspected working at home on my own may turn me a bit batty and, just over six months on, I think it’s started.

I always loved the company of my loud and crazy former colleagues, but have missed them less than I expected to. I’ve come to enjoy my own company – my only interaction being silent and via the good old medium of social media, where you can always find someone to have a conversation with. Between the hours of 9 and 3, I find meeting actual human beings with actual audible voices face-to-face an alien concept.

I’ve always had a slight inclination to talk (and swear) to myself and imagined it would get worse when I was on my own. But, strangely, it hasn’t. Without the sound of other people, I don’t seem to need the sound of my own voice either. Unless I’m using an Excel spreadsheet – then I really hear my own voice, and some words I haven’t used for a long time and do rather miss (my former colleagues will know exactly which words I’m talking about – my colourful language in the office was near legendary).

Fresh air and exercise are very important to me, and being my own boss means I can indulge this much more than if I was going to actual work in an actual office. Right from the start I made it a rule for myself that I would always start the day with a run or a walk. This is so important to me – it clears my head and makes me feel on top of the world. It also stops me going crazy needing fresh air at 11am and disturbing my work. When and if I have so much work I don’t have the time to spare, I would rather work for an hour in the evening than give up my precious exercise.

But recently I’ve taken it further. Despite having the car most of the time, I think it is far better to walk to the shops if I can spare the time – good exercise, good for the environment, saves money etc etc. A massive win, really. I’ve started carrying a rucksack because it’s easier to carry the shopping that way. I fear I am possibly turning into a bag lady.

Looking at my clothes will do nothing to change the opinion that I am indeed turning into a bag lady. I was gutted when, in the space of a week, two pairs of jeans, my only jeans no less, got holes in them. I fretted over new jeans. I bought new jeans. And then I thought: ‘What’s the point in wearing new jeans just to sit at home typing all day?’. So I carried on wearing my old jeans with the holes in them. This has been going on since the end of August. I wear the same pair of jeans and the same hoodie for five consecutive days, because who cares what I look like? And what’s the point in putting them away if you’re only going to wear them the next day? So I don’t.

It’s only October, but it’s suddenly got A LOT colder in the house. I refuse to heat a whole house just to keep me warm, so I am adding layers. Standard wear now is two Tshirts and two hoodies. I reckon I can fit a gilet over the top when I need to. You can imagine just how good I look in this attire. 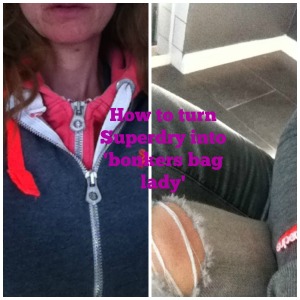 Another ‘rule’ I have set myself is that I will always eat outside at lunchtime (it’s that fresh air obsession again). There has only been a handful of days when I haven’t managed it. Last week, I looked at the outdoor table and chairs and realised they were soaking from a downpour earlier in the day. But the sky was blue. What was I to do? So I got one of my new camping chairs (purchased for watching of football and rugby purposes after four years of managing without) and stuck it in the middle of the grass in the sun to eat my lunch. In my two hoodies, with the hood up.

And I knew that I really had lost the plot. 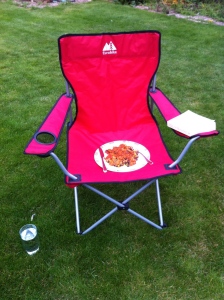