The making of my boy

Home » Family » The making of my boy

‘Is there anything I should know about X?’

I got the feeling that if I’d said: ‘He sometimes doesn’t make it to the toilet on time’ or ‘He has behavioural problems’ it would all have been brilliant.

Oh, that’s fine. We’re such a caring school and we value all children and we can deal with toilet problems and behavioural problems. But mums waltzing in here announcing that their kids are exceptionally intelligent? Who does she think she is?

This was six years ago.

The school holds individual meetings for the reception child and parents to meet, just before the child starts school. Back then, and certainly with this teacher, it all seemed a bit pointless. They run through a load of things about the school that a parent with an older child at the school (or a parent who had bothered to read the information they’d been given by the school already) would know. The meeting isn’t about the child at all.

Then right at the end, they ask THE QUESTION. The question you were clearly not allowed to answer honestly. I’d always been led to believe that exceptional intelligence was a form of special need in itself. His nursery and playgroup were very aware of it and hard worked with him very well. Yet a primary school teacher, better qualified than a nursery or playgroup worker, didn’t want to know. Because she knew best.

At that moment, I had seriously blotted the copy book for the pair of us for the entire year.

At his first parent’s evening we got: ‘There are other intelligent children too.’

I was well aware of that and I never denied that. But my son was intelligent. He needed to be challenged and not judged for having what she saw as a pushy mother. I have never been a pushy mother. I am a mother who knows her own children and wants the best for them. As all teachers should too.

And then came year 1. He had a brand new teacher (NQT), but she was older than your average NQT, in fact she was exactly as old as me – we’d been at school together. She ADORED my boy. She totally got him and his talents. She was in awe of him and put him on the gifted and talented register for all subjects. He shone that year.

His year 2 teacher told me right at the start of the year that his maths was already at Level 4 – the level it’s supposed to be at the end of year 6. He feared the school would struggle to challenge him beyond year 4. Thank goodness Level 6 has now been introduced and the school is capable of teaching individual children who are different from the norm – whether way above or way below.

In year 3 he had the loveliest teacher, another one who adored him and his talents, just as she had adored his brother before him.

His year 4 teacher was very focused on English. He got him writing the most amazing stories, when previously most of his talents seemed to be about maths. (You can read one of the stories he wrote in year 4 – part 1 is here and part 2 is here.)

His year 5 teacher saw something in him that the other teachers had never seen before. They had all been blinded by the ‘clever kid’ and he often got 2s (average) in his report for subjects like sport and music. His year 5 teacher realised how good he was at these subjects too – and what marked my son out as unusual was not just his intelligence, but that he was sociable, friendly and good at sport, as well as being clever.

Now he’s with the teacher his brother had in year 6. She’s a lovely teacher and I know she will bring out the best in him.

The school and the teachers since year 1 have really been the making of my boy, but that reception teacher did her best to knock him (and me) before he’d even started.

The way she reacted to us has niggled me for the past six years, but now I’ve been proved right, so I’m sharing this story and then it’s time to let it go. 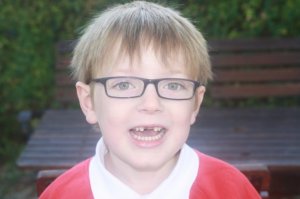