Blogging has opened many doors for me and given me some new experiences, but I never expected to find myself in serious contention for AN ACTUAL WORLD RECORD.

Especially one involving popping balloons with my bum.

The Guinness World of Records is an institution, which has been keeping kids and adults alike entertained and informed for 60 years now. I remember getting a copy of the Guinness Book of Records (as it used to be called) way, way back in the day. I remember the colour of the cover and the pictures on the front. I’ve since discovered it was the 1982 edition. I loved reading and re-reading it. I was particularly fascinated by the human extremes – the tallest, the shortest, the fattest…

Fast forward to 2014 and what better way to celebrate 60 years, than to invite a handful of bloggers and their kids to a celebration at GWR headquarters in London?

The event started with an entertaining presentation from editor-in-chief, Craig Glenday. What a cool job! He’s seen some of the most weird and wonderful things the world has to offer. He told us about the records they don’t include any more, the records which are new to the book (obviously there was no digital technology records in the 1950s!), the records which have changed (the current tallest building is more than double the 1955 record) and those that have stayed the same (Robert Wadlow is still the tallest man to have ever lived). 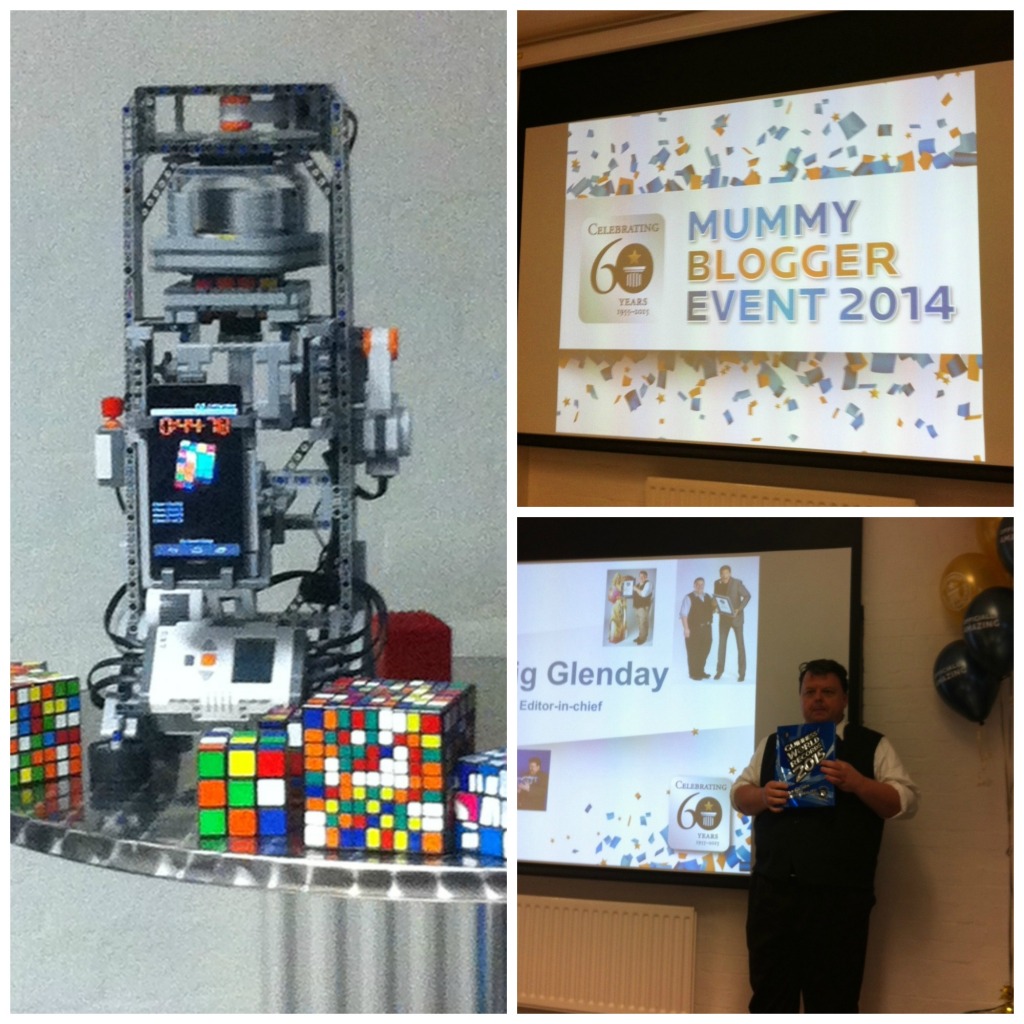 These days there is even an app to bring parts of the book to life! We got to see Jif, the dog who walks on two legs (and looks far more like a teddy bear than an actual dog), and a killer spider, both emerge from the pages of the book. If you’ve got a copy of the 2015 book, you can download the app right here.

Then it was time to see some record breakers in action. But what record did this ordinary looking bloke hold? He wasn’t exactly built like an athlete. He had a can of Coke. Fastest time to drink a fizzy drink? Nope.

What was he doing? Why was he being all weird? He was breathing deeply, pulling strange faces and bending over. And then the noise. Oh my goodness. Like nothing you’ve ever heard before. My daughter said it sounded like ‘a frog being sick’ (although none of us have ever heard that). Yes, Paul Hunn has the loudest burp in the world and has held the record since 2000, breaking his own record twice. It was hilarious. And he kindly demonstrated it several more times for us. It’s a serious business. He has a special regime when he’s going to perform. As Roy Castle would have said – that’s dedication (oooooh, dedication).

We also saw a robot that can complete a Rubik’s cube in seconds and a stunt mountain bike rider in action who currently holds four world records.

And then we got to try to break records ourselves! In groups, we tackled gift wrapping a copy of the Guinness World of records, moving jelly with a teaspoon and popping balloons with our bums.

My eldest did pretty well at the wrapping, achieving 28.75 seconds, beating me by nearly two seconds, but he was helped/ hindered by his siblings. Remarkably, Claire from Cheshire Mum wrapped her book in just over 21 seconds – only three seconds outside the record! 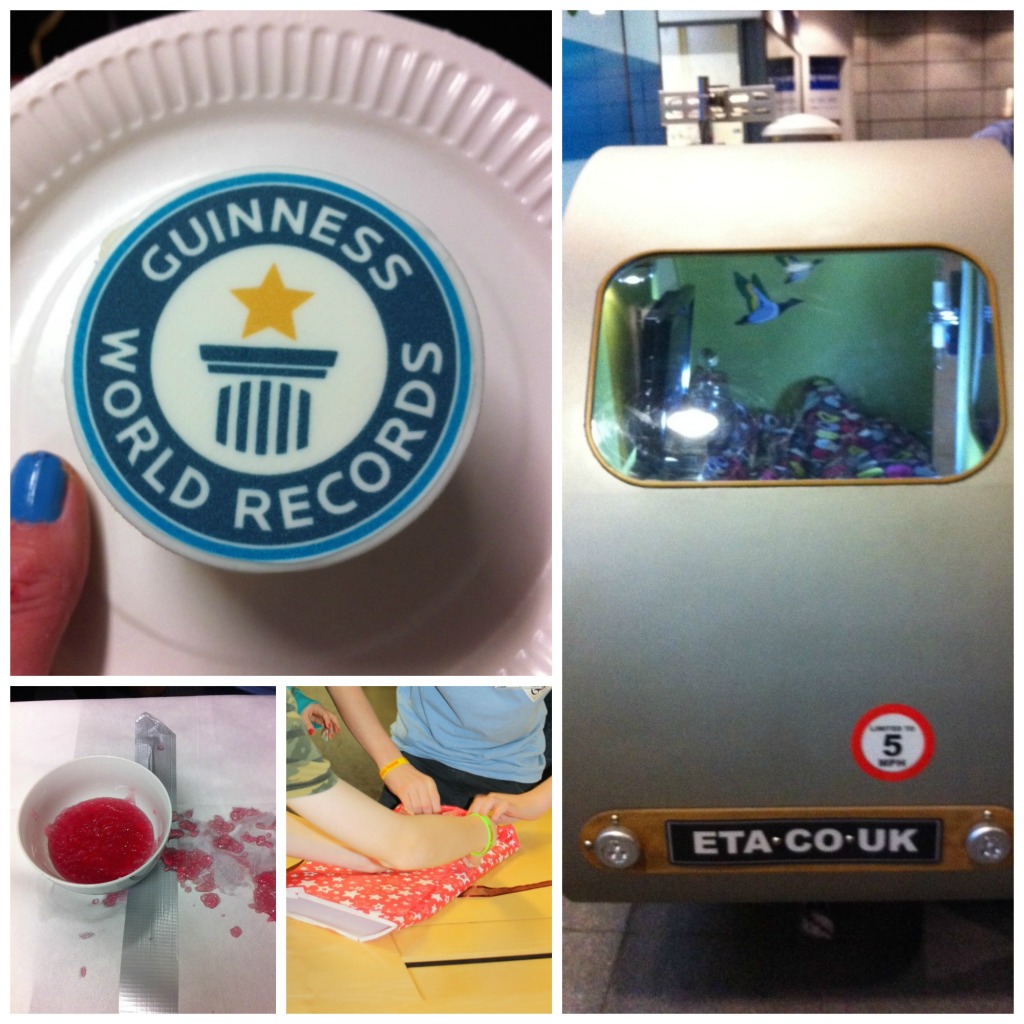 The balloon popping challenge is a strange one – a team of six with five chairs. Five people pop balloons using only their bums and the other one rushes along putting balloons on the chairs ready to pop. The record is the quickest time to pop 10 balloons. First up were the younger kids in our group – with my younger son distributing the balloons. It wasn’t easy for their not so heavy bottoms. Then came the bigger kids and a couple of adults – including me – who were a lot faster. Could the mummy bloggers be even faster?! I had another go, this time as part of the mummy blogger team, and we were the fastest in our group – taking just 23 seconds.

My kids all had a go at spooning jelly from one bowl to another using only a teaspoon and a very careful grip. My younger son did the best of the three of them, but his time on the leader board was limited to about half a second. Once more, it was the mums who were the real champions.

And then it got serious (in a fun way) with a proper adjudicator. The best person from each category was going to go for an actual world record. How exciting! The present wrapping by Claire wasn’t as fast as in the heat – and was declared illegal due to damaged paper. The jelly spooning by Nova of Cherished By Me was some way short of the record, but was still a valiant effort.

I’d forgotten all about the balloon popping. But apparently our team had been the fastest and were going to go for an actual world record. It was slightly surreal, but mainly just funny. We slipped up a bit and got the balloons out of order, which is legal, but slows you down. We were slower than our heat and well short of the record, but what a brilliant experience!

We celebrated the 60th birthday with a special anniversary cupcake and then it was back to the real world.

Thank you, Guinness World of Records, for letting us share your birthday. We had an amazing time!

We were given a copy of Guinness World of Records 2015 and invited to the event. All opinions are our own.