And so the day arrived. The day we’d been building up to for months – grammar school entrance exam day. I hadn’t pushed my son hard – just a bit of extra work every few days to keep him ticking over. I didn’t want him to feel under too much pressure.

All that week I’d been waking up even earlier than usual – with anxiety dreams about arriving late. I’d been waking up soon after falling asleep too. I lost count of the number of times I’d visualised the moment of dropping him off for the exam – at the gate because parents aren’t allowed inside. I was fed up of seeing that picture in my mind’s eye. I just wanted it over and done with.

I tried to encourage him to do 20 minutes work a day after school for the last week before his test. But he’d finished his maths book and his verbal reasoning book. There was only his comprehension book left – his weakest subject and the one he likes least. The one he needs to focus on most. Two days before the test he refused to do it and then he cried. This was exactly what I wanted to avoid. We’d put him under no pressure and I hoped he hadn’t felt any. He didn’t do comprehension that day or the next. There was no point. What would he actually gain from it? He had a lot more to lose if he started getting upset.

I felt ready to crumble then too. I wanted to go to sleep and not wake up until it was over – or maybe stay awake for the entire time until it was over. Because it was so close, only 36 hours. I could do that if I wanted to. I wasn’t sure how I would make it through the next day and into test day. But I did. It was all fine and my son was fine.

On test day he got up pretty early, but he’d slept well. He chatted to me at the table and didn’t pick up the Kindle to play games for at least 20 minutes. My son doesn’t chat in the mornings and, whatever I say to him to try to stop him, he always plays games on the Kindle as he eats. He was clearly nervous, but it was a nice nervous, a happy nervous. More like adrenaline, the sort of thing you can use to your advantage to help you perform at your best.

And then we drove up to the school. I’d read and re-read the instructions about driving and parking – not to turn right into the road by the school, no parking at the school etc etc. My husband dropped us off and I made that final walk with my son. It wasn’t how I’d pictured it, because we were allowed into the school grounds, just not into the room.

I’d heard there were 1,500 kids sitting the exam at that school alone, so many that they would have police there to direct the traffic. There were more kids sitting the test at other grammar schools around the county. All for little more than a handful of places. And it made me nervous. All of his life I’ve known that school was my son’s destiny. But what if it isn’t? That school is local to us – it’s actually nearer than my eldest’s comprehensive (the comprehensive that’s the local school for our village) – yet kids travel from Bristol, Oxfordshire and Swindon just to go there. Our local school. The school that my son belongs at.

The streams of people coming in weren’t dis-similar to the crowds going to a concert or football match. There were that many of them. There were kids from school, kids from rugby, old colleagues and their kids. It felt like every year 6 from miles around was there. Some of them were the ‘let’s give it a go and see what happens’ brigade – the middle ability kids just taking a chance to see if they get lucky on the day. Seeing that, and realising many of them don’t have the ability to get in, made me feel more relaxed about the sheer number of kids.

I tried to give my son a kiss and he wriggled away from me – my son only allows me to kiss him in the morning and at night. I haven’t been ‘allowed’ to kiss him at school for years, probably since year 1. I said ‘good luck’ and shouted ‘I love you’ because I do. I wanted that to be the last thing he heard before he went in. But it was also kind of a joke because I knew it would make him squirm and maybe that would make him feel more relaxed.

And then he was gone. And I just had to go home and kill three and a half hours… 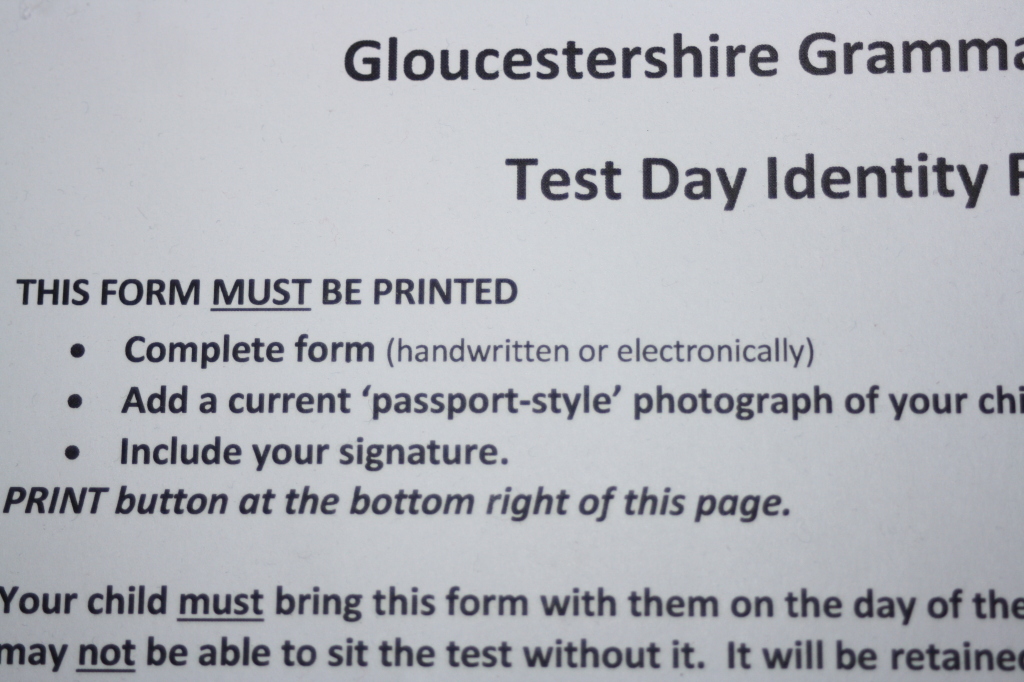