Last weekend, my daughter went on her very first sleepover – for her best friend’s birthday. She’d been looking forward to it for weeks. They are such good friends and so sweet and happy together. It never occurred to me that I would actually miss her in such a small space of time.

She set off at 10am because they were going to the cinema and out for lunch with their other friends before the sleepover. There was torrential rain, and she packed all her stuff up in a Tesco bag for life, I crimped her hair, she put her kagoule on and she was gone. And my house felt empty. 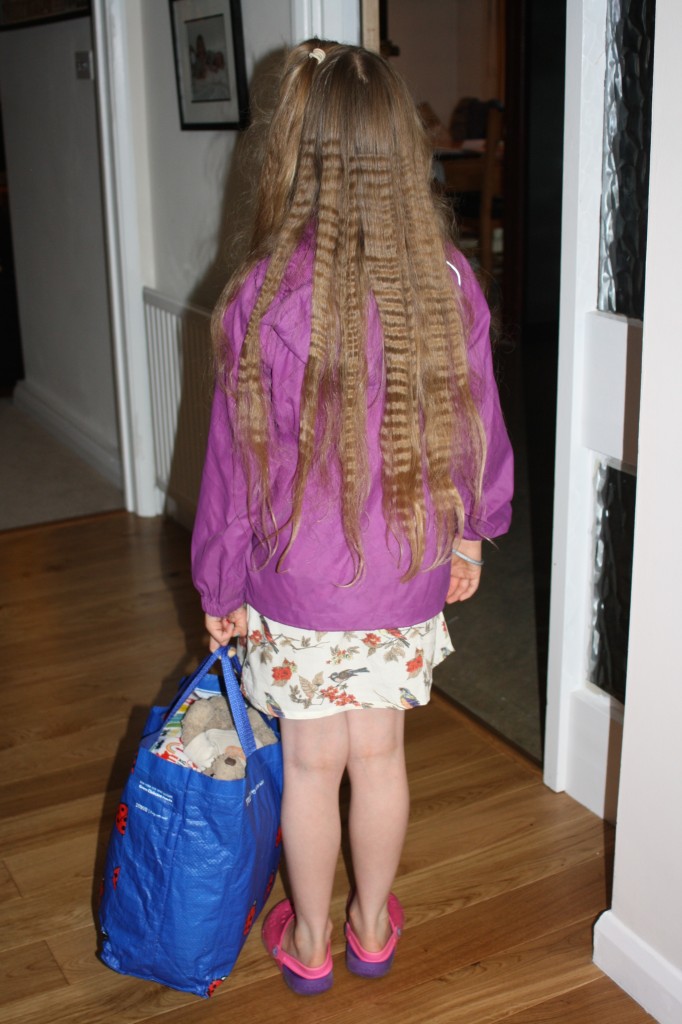 Over the last couple of years, I’ve got used to my eldest being away for periods of time on the endless Scout camps, and I’m even starting to get used to my younger son going away for weekends. When they’re at home, the boys are usually upstairs playing on the Xbox or some other device they’ve been told not to play on. But my daughter is always there.

She’s always chatting to me, dancing and doing cartwheels round the lounge. If she’s not chatting and cartwheeling, she’s sat up her favourite corner of the settee with her Teddy watching the telly – Horrid Henry and My Parents are Aliens. I know the scripts of some of those episodes off by heart and so does she.

The boys and I went ice skating with my younger son’s friend and his mum, which took my mind off it and was a great way to spend a rainy day, but I was counting the hours – the hours she’d been gone and the hours until she would be back.

My husband went to the supermarket and nobody went with him. My daughter never misses a trip to the supermarket, the garage, Daddy’s work to pick up something he’s forgotten or anywhere else. She just loves going out with us, even if it’s to somewhere ‘boring’.

When we said we missed her, the boys saw it as a proof that we ‘loved her more than us’. But it’s not that, it’s exactly what I’ve said here. She’s around more than they are and it’s only when she’s not around that you realise she’s always just there in the same room, brightening the place up with her happy chatter.

Out for a walk in the evening with the boys and my husband, I felt outnumbered. The only female with three males – suddenly the family was only 25% female instead of 40%. There was nobody to hold my hand. My hands didn’t feel right without my daughter’s hand in them. Everyone felt too big – the boys are very nearly as tall as me.

She’d been gone nine hours and 12 minutes (not that I was counting) when I got a text from her friend’s mum and a very happy photo, saying my daughter was being delightful and also very competitive on the Wii. That’s my girl! Delightful and competitive.

She was back just before lunch the next day, having allegedly had 10 hours sleep. The pale, grumpy girl who seemed to have saved up all the grumpiness I might just have missed out on while she was away, didn’t appear to be a girl who’d had 10 hours sleep. But I couldn’t have been happier to see her.

In four months, my daughter will on her year 4 residential with school, when she will be gone for two nights and over 48 hours. That’s an awful lot of hours to count.