It’s just under seven weeks until the Cheltenham half marathon and right now I am struggling to train due to the heat. Every week I calculate when I can run, based on expected workloads and not doing too many big runs close together. I’ve been aiming to run every other day – alternating eight mile runs with four mile runs, to increase both my distances and my fitness. But the weather is having other ideas.

I will never not run due to the heat, but I start out and I realise my body is telling me it’s not sensible. I’m not a quitter, but if my body is sapped of energy and is telling me to stop, I listen. It’s important to me to be fit enough to run the half marathon in seven weeks, but it’s also important to me not to make myself ill. Heat isn’t good for me and my body knows that, it’s why it tells me to stop.

The week before last, I ran seven miles and was a mile from home, when my body just stopped. I physically couldn’t run any further.

A week later, and the weather was even hotter. I was due for an eight mile run, but as soon as I started running, I knew it wasn’t going to happen. I wondered if I should just follow my four mile route, or if I should try to push myself. I decided to push my myself – I headed off in the direction of my eight mile route, telling myself I would cut a big chunk off it. I found I naturally slowed my pace.

Usually it’s important to me that I keep my pace below nine minute miles, but I just had to tell myself that when the temperatures are in the mid-2os at 9am, to even be running at all is a real achievement. Generally I won’t walk either (apart from one long, steep hill near the end of my run which usually defeats me), but again I knew that I had to walk a little bit if I was going to manage it. I managed 5.5 miles at a 9 minute and 50 seconds pace. Normally I would be mortified at that pace, but I was just happy to have run at all.

Between the two hot runs, I found myself in the middle of a short, but very violent storm. I’d forgotten how hard it is to run in rain (it’s surprising how rarely I do end up running in rain). It was driving into my face, making it impossible to see. This was exacerbated by the suncream which it was washing off my face and straight into my eyes. Again, I was aiming for eight miles, again I was close to home and gave in at 5.5.

With the summer holidays now upon us, my running will be even more restricted and I will really have to make the most of the opportunities I get to run because there will be no second chances. My kids aren’t old to all be left on their own, so my husband will go into work slightly late one day a week so I can run, then I will get one run at the weekend. By the end of the summer holidays I need to be running 12 miles!

If this weather continues, I will need to push myself and run further so I can be sure I can complete the distance in September. I’m not concerned yet as there’s still seven weeks to go and, when I think back to other half marathons, I realise there is usually a week or two of training that goes a bit wrong – whether it’s due to extreme heat, snow or injury.

Do any runners have any tips for training in heat – and fitting training in around the school holidays? I’d love to hear them! Thanks. 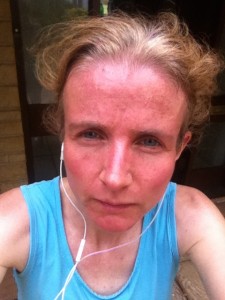 How I look after a run in heat – not a pretty sight!