Except, in my humble opinion, I think our school does win at sports day. I think it totally rocks. Because it’s got the balance just right.

Your kid not a fast runner? Don’t worry! Because our school sports day starts with a whole hour of non-competitive sport. There’s 28 activities and every child has a sheet which the teachers/ volunteers supervising the activities sign. Every signature on that sheet is worth a point for the child’s house. So it doesn’t matter if they can’t win the sprint – or that they’re not picked for the sprint – because if they can catch a ball eight times, shoot a hockey ball at a goal, skip, hula hoop, jump hurdles or run an obstacle course, they can get points for their house.

It’s also fun for parents, who get to follow their kids round the course, take pictures, encourage them, hand them their water, laugh along with them…

Then it gets SERIOUS.

The kids all sit in their houses and there are two kids from each house in each race (theoretically one child from each class, but it didn’t alway quite work out like that). I’d been asking my daughter what race she was in and she kept telling me that she didn’t know or that she was in the relay. My daughter is the second fastest girl in her year. Unfortunately for her, the fastest runner is in her house and her class. And runners were picked when she was rehearsing for Oliver. I checked the programme and was shocked to discover she was in the egg and spoon. Not the relay, not the sprint. The egg and spoon.

‘Do you know what you’re in?’ I mouthed to her across the field

Her face fell. As mine had done. I never knew I was competitive before I had kids, but I’ve learned I’m a competitive mum. Only in the sense of knowing what my kids can achieve and wanting them to achieve their potential. I don’t push them beyond that, but if I know my daughter is fast enough to be in the sprint and the relay, I don’t like to see her left out. To be honest, it’s not even doing the team any favours. If the team want to win (which they do, you should hear the volume of those kids cheering), they should put the right kids in the right races. Anyway, there’s more to this story yet…

My son was running in the year 5 boys’ sprint. My boy has always been a fast runner, but I realise he must have got faster over the last year as he’s being picked for more races and doing better in them. Out of eight boys, he came second. He really gave it his all. His start was quicker than at the school athletics competition and he wasn’t far off first. I know he did his absolute best, so I was really pleased for him.

Then it was time for the (sigh) egg and spoon race. My daughter stood there, all tall, poised and graceful, with her egg (ball) balanced on her spoon. Surely with her balance from years of dance training, she would have this one in the bag? She started off in the lead, walking quickly and carefully. But then she dropped her ball. She started falling behind. More balls were dropped. My daughter dropped hers again. She was coming last! She picked up her ball and strode confidently and carefully over the line in third. Not our family’s greatest ever sporting achievement, but she was happy.

There was a kerfuffle going on with the year 3 girls’ relay. There were five kids there for my daughter’s team, including one whose name wasn’t down in the programme. Then my husband watched as the teachers asked if anyone else would like to join the relay team. He had never seen a hand go up as fast as my daughter’s. There still appeared to be five runners rather than the required four. I feared she would be cut again. But, no, she was on the team, running in third place.

Her team got off to a brilliant start. The second runner ran well and then my daughter. Oh my word! Her long legs were really striding out. She was going for it. And how did that little girl running fourth run so fast? They won the race as the other teams were just starting their fourth leg! I was seriously proud and my daughter was buzzing at their achievement.

The year 5 boys’ relay team didn’t get off to such a good start. When the baton was handed to my son, running in fourth position, they were definitely coming last. But look at that boy go! He overtook two boys and his team came in second. I was so proud! But was he pleased with himself? No, because another metre or two and he would have won it!

It was shaping up to be a pretty good sports day for our family. There was just one more race. I may have worn my Converse instead of my flip flops and I may have tested my jeans when I got dressed in the morning to see which pair had the most give in them. It would be too obvious to rock up to school in my joggers and my running trainers, so I kept it low key.

The mums’ race was less popular than ever, with just four mums lining up to race. I’m a runner, but I’m not a sprinter. And I don’t ever run in jeans and Converse. I did my best, but I just couldn’t win it. I came second, but I’m pleased to say the other two were some distance behind me. I think my kids were proud… 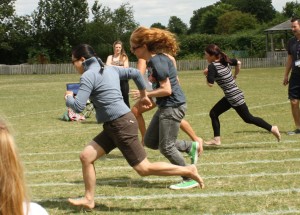 At the end of sports day, there were just 12 points separating the top team from the bottom team – points from winning races, from coming second, third or fourth, and from taking part in the non-competitive events at the start of the day.

My kids’ house came third, but you could call it second, because for the first time ever, there was a tie for first.

It had been another successful sports day. For the school, but also for my family.