After a journey in which my friend Nikki aka Stressy Mummy and I repeatedly got lost and confused on the tube, we arrived at Britmums Live. We were late, so there was no time to join a queue or be nervous. It was straight into the keynote speech with Emma Freud – what a likeable and funny lady! Am I allowed to say she’s a much more entertaining speaker than last year’s, Kirstie Allsopp (who also happens to be her next door neighbour)? Emma has done some really ground-breaking stuff like be responsible for the first ever celebrity reality show (was there even life before them?!) and persuade mobile phone companies not to charge for text donations to charity. Oh, and she swears a lot, tells a few lies and wears a tiara (as did the entire audience).

I enjoyed listening to success stories from high-profile bloggers, including Fashion Foie Gras, who I’d never heard of because fashion isn’t my thing, but her blog is HUGE! The session on the power blogging can bring to your life was another inspirational one. The message I took from both of these sessions was I’m it right – I have my own voice and I do my own thing. My blog isn’t over-run with sponsored posts and reviews, because that’s not what I want it to be, although I do have a few of them. I’m happy that I’ve got the right balance for my blog. And can I just say that when Her Melness Speaks speaks she makes so much sense? For me, she was the best speaker of the entire weekend.

I was so pleased I wrote a post about what I was wearing to Britmums Live  because so many people just looked at me and I knew he I was. I guess my look is fairly unique in the blogging community. I met so many lovely people that it’s impossible to name them all, but I was particularly pleased to meet Judith from Secrets of the Sandpit. Her blog is so well-written, it is one of my absolute favourites. We always joke that I’m Judith’s stalker.

Then it was time for the BiBs party, in the beautiful courtyard of The Brewery, followed by the award ceremony. There were some fantastic winners, although I was disappointed to see one of my very best blogging friends, Suzanne from 3 Children and It not pick up the family award.

I hadn’t made any dinner arrangements, other than I was going with Nikki, as well as Sonya aka Rock ‘n’ Roll Mum and a couple of her friends. We dragged our heavy bags and tired feet through the dirty streets of London to get to our Premier Inn, then tried to find a restaurant. But we were in completely the wrong part of town. There was nothing and it was getting late and we were getting hungry, so we ended up eating at the Premier Inn! But the company matters a lot more than the food and the surroundings, right? It was nice to be able to just sit and have a conversation.

There were a few fragile people on Saturday morning (thanks in part to wine sponsor Lindeman’s), but, being a teetotaller, I wasn’t one of them. A few of them skipped the keynote due to their fragile state, but also because they were were worried about listening. It’s really not easy to hear a man in his 30s, a dad, talking about the death of his wife, but I was so glad I went to hear Life as a Widower speak. Of course there were tears, but his talk was also uplifting and inspiring.

I skipped the next session to hang out with friends, particularly the lovely Tas from Not My Year Off. We’ve been friends for a long time, but it was the first time I’d had the pleasure of meeting her in real life. Tas and I had been talking on Twitter about collecting World Cup stickers (her husband collects them and my daughter does too), so I was so touched when she gave me a bundle of unopened packets for my daughter. With Suzanne and Judith too, the Loud ‘n’ Proud posse was together! (That’s the linky we share on a Thursday, if you don’t know what I’m talking about!). This dodgy photo was the best of five taken by Charly from Podcast. Charly takes the most beautiful photos ever, so I was kind of pleased even she couldn’t take a decent photo with an iPhone in a dark room! 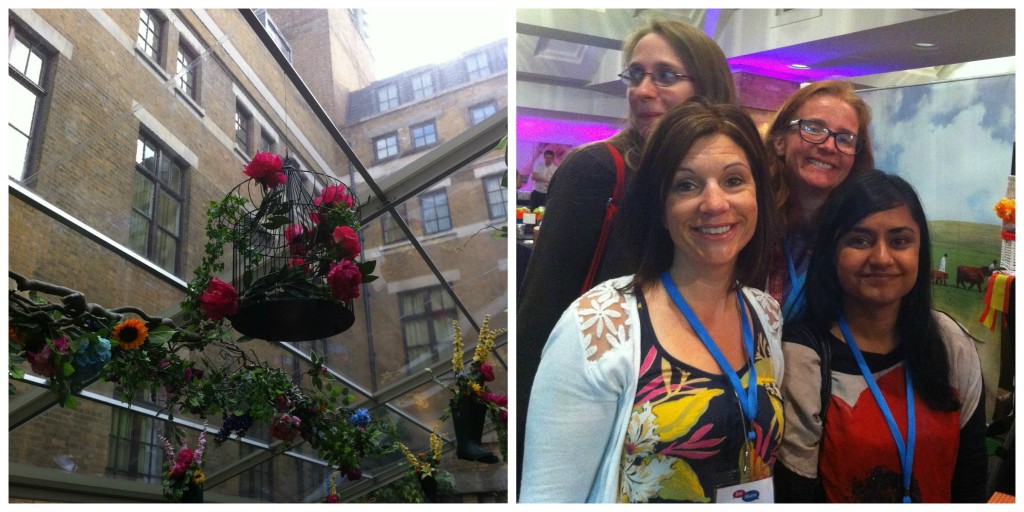 The SEO session was useful for my career more than my blog. I’m never going to be an expert, but it’s useful to have a bit of extra knowledge to advise clients on SEO. I wanted to go to the Google + session as I still haven’t mastered it after all this time, but the queue was miles out of the door, so I went to travel blogging. It was interesting and entertaining, but I’m never going to be a travel blogger.

Lunch was a bit small and not that nice. I think I’m not alone in thinking that. It looked beautiful and had lots of interesting ingredients, but it just didn’t work. Generally, there was a lack of savoury food over the weekend, and a big lack of vegetarian food too (I spotted one plate of vegetarian canapés at the BiBs party, but I couldn’t get to them). There wasn’t any vegetarian food in the Morrison’s lounge either (unless you count cake, but there was cake everywhere!). But at least I got to spend some time with my friend Emma aka Crazy with Twins over lunch.

After lunch, I heard more about monetising my blog and got some tech advice from Geek Mummy. As the world’s biggest technophobe, I was relieved to find that I knew more than I thought I did. That was another session where people were crammed in and I was sat very uncomfortably on the floor.

And then the weekend was nearly over. The bloggers’ keynote is a real highlight – the posts are so moving. It’s incredible the challenges that people have to deal with, yet they write so beautifully about them. And to stop anyone going home feeling choked up and emotional, The Good Enough Mums Club rounded things off with a good laugh and a lot of swearing.

Time to book my ticket for next year!