Home » Work » The leaving do

Well I couldn’t go on my own leaving do after 15 years and not record it for posterity, could I?

Nights out at our work (OK, my ex-work, it still feels like my work) are legendary. The word most commonly used to describe them is ‘carnage’. They drink. Then they drink some more. The shots appear as if by magic. Some more shots appear. They dance. They sing karaoke. They go home ridiculously late.

As a teetotaller, there is a reason I never went on too many nights out, although I had my fair few over the years. My rule was always ‘home before the vomiting’ (because I have a phobia of vomiting). We have had some hilarious nights out over the years. Watching a Take That tribute act at a local football club, which ended with my friend molesting ‘Howard’ on the dance floor after two bottles of rose, has gone down in history as the funniest night EVER. Then there was last year’s Christmas do, with karaoke in the restaurant, when I literally had to carry my friend to her daughter’s car.

So in short I was expecting carnage for my leaving do. Because it wasn’t even just MY leaving do. It was OUR leaving do – four of us ladies, all been there a ridiculously long time, and lots of colleagues and ex-colleagues out to celebrate, commiserate, get rid of us, whatever.

We started out with dinner in a newish restaurant/ bar with a cool interior. This is Gloucester. In my experience cool interiors are rare. I was impressed with the decor and had high hopes for the food. To be honest, it didn’t deliver. Not everyone was eating, so we ended up with an ‘eating’ table and a ‘drinking’ table that weren’t even next to each other, despite being promised that we could all sit together. This was a real shame as there some people on the drinking table that I never even got to speak to.

Then the fire alarm went off. Right between main course and pudding as I was stood at the bar. This meant I had to go out into the cold in only my Tshirt, leaving my hoodie and coat upstairs. I was a) cold and b) worried they’d be nicked. Because I’d made a real effort and got a NEW hoodie, as well as some new jeans. Yes, everyone else was in a dress, but it’s just not my style.

Fire alarm over, we got our pudding and then headed for the pub. And still no carnage. Everyone was on their best behaviour.

I had a lovely chat with my old boss from way, way back in the day and another colleague I’d worked with 10 years ago. We keep in touch on Facebook, but it was so nice to see them in the flesh for the first time in nearly 10 years.

People started to leave and the hardcore party people headed for the gay bar. There was a couple of drag queens swearing a lot and some karaoke going on (but we weren’t allowed to join in – the list was already closed, or as one friend put it ‘they don’t let straight people do it’). The gay bar is a funny mix of very young people, very old people, gay people and a fair number of straight people too. I’ve been there before and had a laugh, but I just wasn’t feeling it. My friend and I sat down at a table, and a woman in her 60s plonked herself down next to us.

‘What is this place?’ said my friend, ‘I feel like I’ve died and woken up in hell.’

Bu then the strange lady moved and our friends sat down next to us, Angels came on the karaoke and we all started to enjoy ourselves. 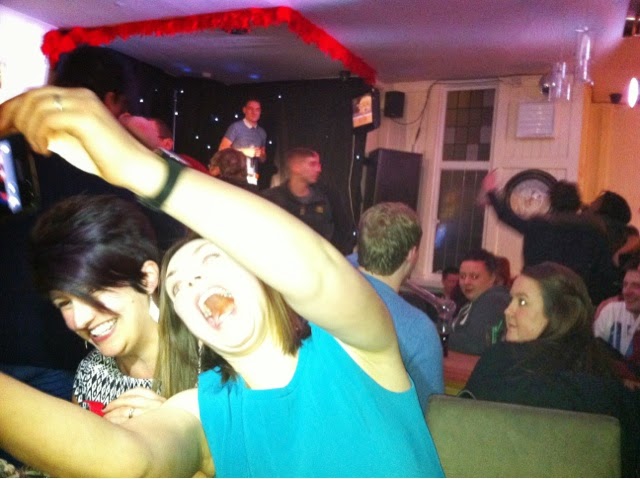 It was gone 12.30 when I got dragged to a club, despite my protestations. The shots still hadn’t been out and everyone still seemed remarkably sober. But all I could think of was I had to be up for swimming lessons. But it was my leaving do. If you can’t stop being sensible on your leaving do, when can you stop being sensible?

So we headed for the cheesiest club ever – Abba, Whigfield, Tiffany – they played cheese from every era. And as soon as I walked in, I knew I’d done the right thing. Sod the swimming lessons. I started dancing and didn’t stop. I had a great time, especially when they played Mr Brightside, which is one of my favourite songs EVER and most definitely NOT cheese. But when it got to 2am, I knew I had to go home.

I got in at 2.40am. My latest night since having kids. That’s a PROPER leaving do.