My daughter is a pretty good swimmer. She’s not going to be in the Olympics, she wouldn’t be considered gifted and talented, but she’s pretty good for her age.

She’s on the final stage of swimming lessons (of course she could go on to badges and competitive swimming etc, but that’s not the plan). She’s done two terms and we hoped she’d pass this time. This is something her brothers never did. They did two terms at this stage and they failed and I just wasn’t prepared to throw any more money down the drain pay for any more lessons. They were right at the end of year 6 and year 3 respectively when we gave up the swimming lessons.

On top of her usual lessons, my daughter had been swimming with school for a term and had done very well. The other day she swam THIRTY TWO LENGTHS of a 33metre pool. If my maths is right, that’s nearly three quarters of a mile – just under 1200 metres. Pretty good for an 8 year old! So we kind of assumed she’d pass this term. No more swimming lessons and we would get our Saturday mornings back.

But she didn’t pass.

The teacher had obviously thought long and hard about it. She filled in her sheet during the lesson, while all the other kids’ were already filled in – pass or fail. She’d spoken to the other teacher and taken into account the whole 32 lengths thing. But she’d decided that her breaststroke just wasn’t good enough. 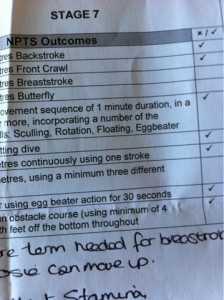 I’d like to say my daughter took this well.

It’s great having high achieving children and I will never say that it isn’t. But the only downside is that they have very high expectations of themselves and they don’t take failure well.

For the first time ever, she turned on me.

Nothing I said could appease her. It was just making it worse.

‘But you’re a good swimmer.’

And on and on she went.

I pointed out that it wasn’t my fault. And it wasn’t hers either. She just needs to work a bit more on her breaststroke, just like she worked on her front crawl a while back. But she wouldn’t let up. Everything was negative. Everything was turned round and thrown back at me.

All she wants is to beat the boys. They failed after two terms and so had she.

She’s a better swimmer than them and I told her so. That wasn’t good enough.

I know she could beat her eldest brother in a race, despite the five year age gap and I told her so.

‘Well, when we race, he just drags me back and stops me from winning.’

There was no point. The argument went on from the changing room and all the way on the drive home. I didn’t want to argue with her and tried to stop it, but she couldn’t stop throwing stuff at me.

So I sent her away to calm down. I left her on her own for 45 minutes.

When I saw her again, she was back to normal. She’d read her book and done her hair (she does her hair constantly) and all was well with the world again. 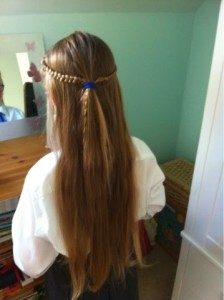 Now I wonder if this is the start of tween behaviour – our very first argument (which I suppose is quite an achievement to go eight years without one.) At what age do girls usually start arguing with their parents?

If you enjoyed this post, and my other posts, I would be very grateful if you could consider nominating me for this years Brilliance in Blogging awards (BiBs). You can nominate right here http://www.britmums.com/awards/  (I think I might fit rather well into the ‘family’ category).