There’s nothing like the Christmas Eve Elf Mission to get the heart racing and the adrenaline pumping. Can you do it quickly enough? Can you do it quietly enough? Will all the presents get into the right sacks? And how late will you have to start to be sure it’s safe? The whole thing is like holding your breath for half an hour.

Like everything else in my life lately, the Elf Mission has been affected by our temporary accommodation. When we moved, I took the wise decision to put the few presents I’d already bought into my mum’s house before the removal men threw them in a box, taped it up and shoved it in an inaccessible garage along with 90% of our possessions. So when I completed my shopping a few days later, it seemed sensible to put the rest of it at my mum’s too. This then added a whole new layer of nervousness to the Elf Mission, as I needed the opportunity to liberate the presents from my mum’s and bring them to ours. And the opportunity never arose.

We made it all the way to the evening of Christmas Eve and still the presents were stuck at my mum’s. And my car was parked on the drive outside the lounge and the boys’ bedroom. They would hear it if I went anywhere.

The one advantage of our temporary house is that it has a proper back door (our old one didn’t). So while the kids were watching telly at about 8pm on Christmas Eve, I sneaked out of the back door and moved my car a little way down the road ready for the getaway later.

At 9.30pm, I looked in on my boys and my younger son was lying down with his eyes closed. He may not have been asleep, but lying down with his eyes closed would certainly have got him to sleep quicker. This is a small miracle. Despite being only 10 and despite repeated reminders to the contrary every single day, my son believes his bedtime is 10pm. To go to sleep before 10 is a sign of weakness.

At 9.45 I told my husband I was going for a shower loud enough for my eldest to hear, then sneaked out the back door and to the car and round to my mum’s. Fitting in all of our presents to the kids, plus my mum’s, my sister’s and my auntie’s, as well as our presents for other people was a challenge. I parked the car back on the road and went inside to watch telly and wait for my eldest to fall asleep. He was still awake at 10.30.

At 10.45, I decided we could at least start piling stuff in the utility room because there was no way my son could see in there if he got out of bed. I put my incredibly warm fleece panda onesie over my pyjamas and the Panda Elf Mission was on. It took five furtive sneaks out of the back door, through the back gate and down the road and back again, laden with presents and wearing a panda, to complete the mission. My husband hovered in the kitchen where he had a good view of the boys’ bedroom and could help me quickly unload the presents. 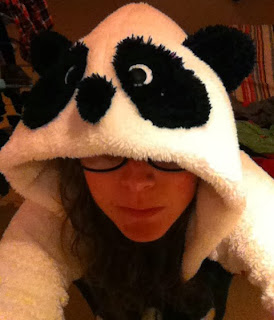 Red and white is so 2012. This year Father Christmas is wearing panda

Once the presents were inside, we just went for it. Sorting, stuffing and arranging until there were three bulging bags. We weren’t even quiet.

And Father Christmas had been. Another mission accomplished. 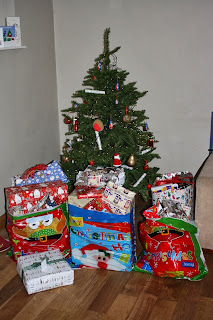 There was just one small problem.

‘Mummy, why is your car in the road?’

‘I parked it there so Father Christmas could get his sleigh on the drive.’

And she was so pleased with that explanation and how good and thoughtful Mummy had been, that she told everyone. Result!