The Cuckoo’s Calling by Robert Galbraith

This is the ‘secret JK Rowling’ as revealed by The Times in July this year. As a big JK Rowling fan, not just of Harry Potter, but of The Casual Vacancy, I just had to read it. And I wasn’t disappointed!

The book was critically acclaimed following its initial tiny print-run before anyone realised the true identity of its author. Which is not at all surprising. It really is a brilliant book.

Just as The Casual Vacancy is very different from Harry Potter, so this is different from both of these works. The only clues to the true identity of its author are that it is VERY well-written and a mention of pink writing paper with kittens on it (which just yells ‘Professor Umbridge’ to a die-hard Harry Potter fan).

The book introduces Cormoran Strike, down-on-his-luck one-legged Afghanistan veteran turned private investigator, and Robin, his temporary secretary. Strike is called on to investigate the suicide of a mega rich and famous model, because her brother suspects murder.

This isn’t a fast-paced, far-fetched thriller like some crime books. In many ways it fits better in the ‘cosy crime’ section of the bookshop, along with The No1 Ladies Detective Agency. Strike and Robin’s partnership reminded me a lot of Mma Ramotswe and Mma Makutsi.

Where The Casual Vacancy was set in working class and middle-class suburbia, this is set in a world of the super-rich – models, designers, rock stars, film producers… Everyone is picked up by a driver, there are lots of drugs and the language is colourful (most definitely not ‘cosy crime’). The characters are vacuous and self-centred and totally believable.

While initially sceptical that the model’s death is anything but suicide, Strike comes to believe that maybe she was murdered. But was she? And, if so, who did it?

I couldn’t possibly say. But I could say this is a brilliant read and highly recommended. 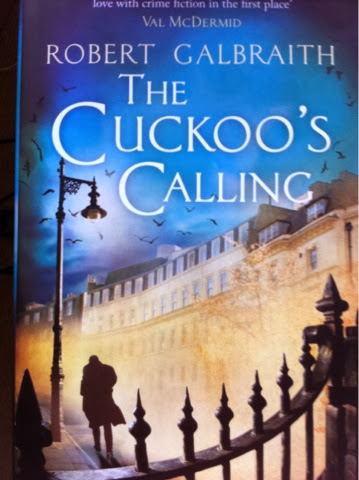