The Casual Vacancy by JK Rowling

The Casual Vacancy, JK Rowling’s long-awaited first book for adults, came out a few weeks ago to mixed reviews. Well, I’ve read it and I think it’s brilliant.

Reading it, you would never in a million years guess it was by the same author as Harry Potter and I think that’s proof of her skill as an author. Not being the same as Harry Potter doesn’t make it any better or any worse.

The Casual Vacancy is a simple story. It’s a story about people. You’ve probably heard that it is all about the death of a parish councillor and that’s basically what it is. But at the same time, it’s so much more.

Barry Fairbrother, the parish councillor, dies suddenly and the book is all about how his death affects people in the village. Some are devastated, others see it as an opportunity, but it affects them all one way or another.

It has a huge cast of characters, who all have about equal weighting in the story, and I must admit I was struggling to keep up with who was who at first. Most of the characters are middle-aged parents and their teenage children. They are pretty much all flawed individuals. There’s doctors, lawyers, business people and teachers. There’s domestic violence, drug use, affairs and self-harm. So much goes on behind closed doors and, just as in real life, the other characters are largely unaware of what their friends, colleagues and children are dealing with.

My favourite character is Krystal Weedon, a girl from the wrong side of the tracks who was sworn, bullied, flashed and fought her way through school. We should dislike her – we wouldn’t want her to be friends with our own kids, yet Rowling manages to make us care for her.

I’m not going to give the story away, but I would most definitely recommend this book.

Have you read it yet? What did you think? 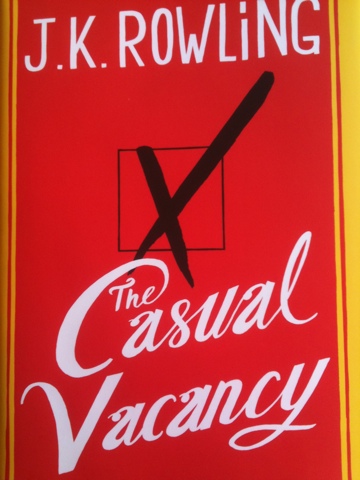