For a while now, my younger son has had it in his head that he wants to do something sponsored. He likes the idea of a run or bike ride (although he’s not used to running long distance – only whizzing up and down football and rugby fields). He wants to do the Sport Relief Mile next spring, which I always do with the kids (I think it’s time to up our distances a bit), but the reality is it clashes with rugby on a Sunday morning and he probably won’t do it in the end.

But then came Children in Need. Suddenly he wanted to do a sponsored silence. I wasn’t sure, but we ordered the fundraising pack and he was ‘quietly’ determined (see what I did there?).

Then his sister wanted to join in.

She decided to practice. I told her she needed a pad and pen so she could write down everything she wanted to say. Sign language was OK, mouthing words I felt was cheating a little. She got stressed and kept waving her hands and then saying ‘I’m just stopping for a minute’ before announcing something urgent she needed to say. That actually wasn’t urgent at all. I wasn’t sure she would manage it. Or even that she wanted to do it.

‘But it’s just so hard!’ she complained.

I pointed out that’s what sponsored events are about – you have to push yourself, you have to achieve something that people are impressed by and want to sponsor you for.

But I also gave her the option of not doing it – nobody was forcing her. It had to be her choice, but if she was going to do it, she had to do it properly.

Both of the kids made a sign, decorated with Pudsey stickers, explaining that they were doing a sponsored silence for Children in Need and couldn’t speak. 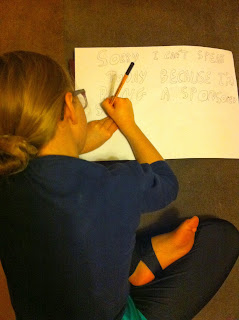 My son had a maths competition on the afternoon of Children in Need day, so needed to speak. He wanted to go without speaking for a reasonable amount of time, so went silent at teatime the day before.

My daughter called me when she woke up at 6.30am, told me she was starting her silence, and that was it.

No chatter at breakfast time – although they still managed some of their usual banter by writing it down. They quickly got the hang of coming to me with a notebook to say what they had to say. 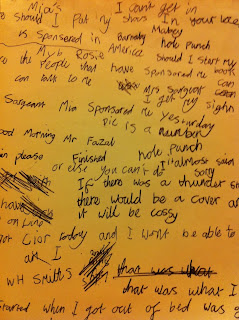 An excerpt from my daughter’s notebook, goodness knows how people could read it!

And then they went to school. I had a quick word with their teachers, who were all very pleased for them to take part in class, and left them to get on with it. I wondered how they’d manage with all their friends chattering around them.

As I went to pick my daughter up, I heard a girl I don’t know telling her dad about her. Then three other kids, one of whom I don’t know, told me how well she’d done with her silence.

I felt so proud of her. It had been a rubbish week one way or another, but this really put a smile on my face. She wasn’t sure if she could do it, but she had. She’d been brave and she’d given it a go and she’d managed it.

I told her how proud I was of her and she just smiled at me. Because she was still being silent.

She showed me a notebook full of kids’ names all pledging money. I’m not sure whether we will ever see that money, but it’s sweet that they wanted to do that. One of the teachers had given her five house points – which won’t raise any money for Children in Need, but it shows the school was proud of her too.

My daughter started speaking again at 5pm – mainly because I was upset about a lot of other stuff after a really bad week. She wanted to make me feel better and I’m proud of her for that too. She managed 10 and a half hours without speaking and her brother managed 11 and a half waking hours.

The kids are hoping to raise between £50 and £100, which would be a real achievement. They’re looking forward to getting their certificate from Children in Need and showing it in assembly.

I’m so proud that it was all their own idea and they saw it through without making any fuss. They are my little stars.