Having his birthday in autumn, it’s always harder to know what to do for my younger son’s ‘party’. My eldest’s parties in the summer have usually revolved around the garden and once even involved camping, but late October is a bit more unpredictable.

When he was little we went for that old ‘favourite’ – soft play. But then the rough-and-ready local soft play place closed down and a yummy-mummy-and-toddler friendly one opened up instead. It wasn’t challenging or exciting enough for growing boys, so we needed something different.

When my son turned 7, he opted for cinema and Frankie & Benny’s with a couple of friends. It worked well. Everyone enjoyed themselves and had fun. So he decided to do it again when he turned 8. But then his friend told him about Nandos. Specifically about BOTTOMLESS FIZZY DRINKS. Now my younger son loves fizzy drinks (they are reserved for birthdays and Christmas only), so this sounded like the best thing ever.

So he did it again when he was 9 – cinema and Nandos. By this time the friend who first introduced him to the Nandos phenomenon had started eating hot sauce. Ridiculously hot sauce. The hottest sauce available. This was funny (if you’re 8 or 9). And there was still the fizzy drinks! What more could you want from a party?

So what did he want to do for his 10th birthday? He decided he’d like to take his friends to a football match, but he still wanted to go to Nandos.

After an afternoon at the football, the kids were hyper before they even arrived. As they all sprinted off towards Nandos,  shrieking with excitement, a complete stranger said ‘Good luck’ to me.

The kids got in and started filling their glasses to overflowing. But they were filling them with ICE.

Brilliant, they thought they’d got bottomless fizzy drinks and what they’d actually got was bottomless water. Result. 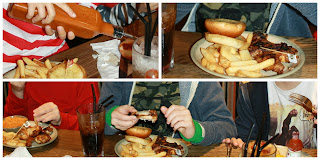 They sucked the ice up with their straws and deposited it on napkins. It was pretty disgusting, to be fair. But it was a birthday, they were having fun and they weren’t doing any harm. It’s noisy enough in Nandos that it can absorb the sound of seven kids getting excited about hot sauce and ice.

The waiter watched in awe as my son’s friend doused his chips in the hottest sauce, they consumed a bit more ice, they laughed a lot and we left.

And we’ll be back next year.

This is not a sponsored post or a review – my son and his friends just love Nandos!