I’ve never read any Stephen King before. I just thought he was a guy that wrote lots of horror books and the horror books often got turned into films. Now I don’t like horror books or horror films. But then my friend UleyGirl bought me his book On Writing. It’s partly an autobiography and partly advice on becoming a writer. It was a great read and I found him a really fascinating character. So I thought I might be brave and read one of his novels.

I bought 11.22.63 MONTHS ago. But then I bottled it. It’s by Stephen King! And it’s a really massive, thick book! (It’s 740 pages of small writing.) I told myself I must read it. I waited until it was the last book I had left, by which time I would normally have gone out and bought more books, but I stopped myself from buying more. I was determined. I had to be brave! I had to read it.

And it’s a brilliant book. Brilliant.

I was hooked from the word go.

A teacher living and working in 2011 sets out on a historical mission to prevent the Kennedy assassination and change the course of history. He’s convinced that if he can prevent Lee Harvey Oswald from shooting the president, the world of the future would be a better place. And so he sets out to do just that. Needless to say, it’s not the smoothest of journeys or the easiest of missions as he adapts to life in the 1960s.

It’s a long book, but never boring. It is completely riveting. The characters, the settings… everything about it is incredible. 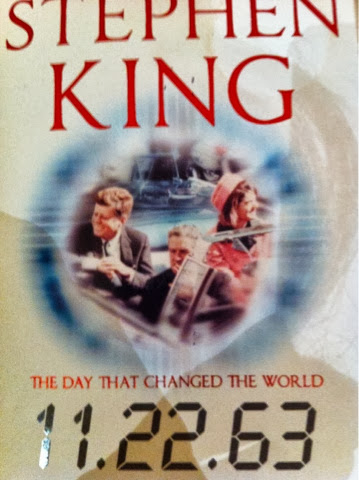