How much independence does a tween need? Is it the same as how much they want? And how do you balance that with the needs of the whole family?

As my son gets older and pushes for more independence and time away from us, I’ve been pondering these questions.

His need for independence became apparent on our recent holiday to Padstow Holidays are very important to us. I’ve said it before, my husband works incredibly hard Add this to my job, the pressures of school and the quite ridiculous number of extra-curricular activities my kids do, we really need holidays. They are our only time to unwind and spend time together relaxing as a family.

But my son always wanted to be off on his own or doing something else. If he wasn’t stupidly off on his own climbing rocks in his Crocs, he was asking to go for a walk while we waited for the bill in the restaurant. His best friend came down for a few days, which helped him to be independent and spend some time away from us. 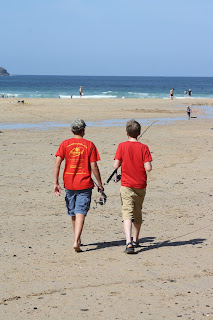 I respect his need for independence and to stretch his wings, but I feel sad that it comes at the expense of the rest of the family. It’s not really a family holiday if four of us are trying to enjoy it, while one is constantly trying to get away.

I know how he feels, because I remember feeling that way too. I was 14, going on 15 (whereas he is only just 12), and two school years older than him. I was on holiday in Devon with my parents, my grandparents, my younger brother and my little sister. My head was full of photo stories from Jackie and Just Seventeen about foreign holidays with friends and holiday romances. I didn’t want to be in Devon with my family and I was a sulky cow. But, in my defence, that was my ONLY week of teenage behaviour in my entire teenage years, so I think I did pretty well really.

Now I don’t buy into the whole ‘stranger danger’ thing – the chances of being abducted now are miniscule and are now different to what they were 50 years ago. I think my kids have played outside more than most, but I admit I wouldn’t let them stray as far as I used to wander, even with mobile phones.

In my day, you made arrangements to see your own friends, simply by knocking on their doors. Your parents didn’t arrange ‘play dates’ (that phrase makes my skin crawl). If your friend could play, they came outside to play (you never went into their house) and if they couldn’t, you went and called on another friend.

Is it because we had this level of independence from around 5 years old, that we didn’t need to be constantly dragging away from our parents by the time we were 12?

I don’t have the answers. I’m just putting it out there. If anyone has any suggestions on how we can enjoy family time and accommodate this need for independence, I would be very pleased to hear them! In the meantime I guess I need to enjoy my son when I can and embrace my younger two before they start pulling away from  us too.