What they wore: Baby cousin’s christening

This week’s what she wore includes a rare guest appearance from my boys.

It was my gorgeous baby niece’s christening last week – an occasion which had of course caused my daughter to spend many hours scanning the Next Directory and circling a quite ridiculous number of potential outfits. Not that she’s a spoilt little princess or anything, but I took almost as much pleasure in this task as she did. Knowing the christening was going to be in July and, aware that summer stock is running out then, and the sales are starting, we chose and bought The Dress sometime ago.

It is a really beautiful, girly dress from Next, suitable as a flower girl dress or for the very important matter of your baby cousin’s christening. It is a very pale, vintage looking pink and made of floaty material. It has silver sequin bows on the skirt, a sequin collar and a gold, glittery belt. It is a comfortable and flattering just-below-the-knee length. Pretty much a little girl’s dream dress. Well, my dream of a little girl’s dream dress at any rate – no horrible bright pink, leopard print or lilac here, thank you very much. 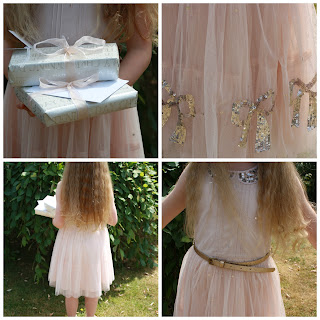 We bought a pair of Next sandals to go with it, which have been carefully preserved and not worn (apart from to try out her lovely tutu) to avoid wrecking them before the day. 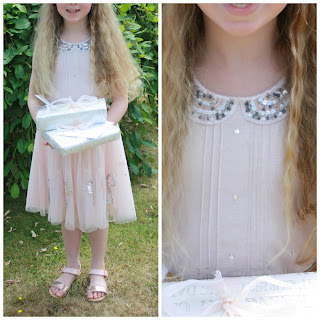 I felt I’d made an error when I bought the dress. I didn’t buy a cardigan! NEVER buy a dress without a cardigan. This was for a christening in July, after all. It was bound to be 17 degrees and torrential rain. As it happens, she was actually too hot in her sleeveless dress!

Needless to say, slightly less thought went into the boys’ outfits. Is this wrong? Or just normal? I suspect the latter, because it’s the same for grown ups, isn’t it?!

My eldest wore an M&S shirt and tie set which he’d had for Christmas. It is navy and looked a bit dark for a summer day. If I’m honest, we’d have probably exchanged it after Christmas but we were all rather distracted by the fact that more than half the family had flu so that didn’t happen. It saved us having to use our imaginations and drag a grumpy boy round the shops though! He wore the tie with a pair of light grey trousers we got in the Next sale. The trousers are the style he always wears – baggy on top, tight on the ankles – so I know he will wear them again. Result!

We DID drag my younger son round the shops – he is a lot more co-operative about this sort of thing than his brother. He wore a short-sleeved Gap shirt with large stripes of blue and pink (but we won’t call it that, we will call it ‘light red’), with a similar pair of Next trousers to his brother’s. My younger son’s trousers were slightly baggier than his brother’s with a wider stripe. And we bought them a week BEFORE the Next sale, which might not have been the best idea. Both boys wore their outfits with their school shoes. Although the shoes have almost certainly seen better days, it is too early in the school holidays to be buying new ones. 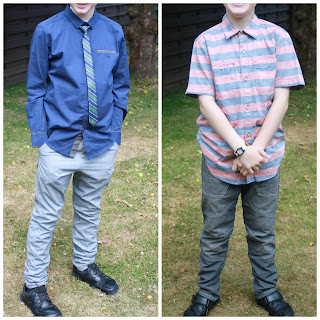 I’m pleased to say that all my kids looked lovely and did their cousin proud.