My name is Sarah and I am afraid of flying. Actually, that’s not true. I’m not afraid of flying, I’m claustrophobic. So being stuck inside a big metal cylinder in the sky is not ideal. Most of the time I’m fine, but I always like to be sure I can just open a door and walk out of a place if I want to, or open a window and stick my head out and get a bit of fresh air. And you can’t do that on a plane! So that pretty much makes me afraid of flying.

I’ve flown before, of course. Not that much. We’ve never been particularly adventurous types. My first flight was at the age of 15 on a school trip. I flew a few times over the next 10 years or so, including for work and a handful of holidays. We even went to Thailand on honeymoon. And I HATED those flights. I knew I would never fly that far again. I was sat next to an elderly lady (she had the aisle seat) who was asleep. I felt totally trapped and spent the majority of the flight desperate for the toilet.

We flew to Paris (for Disneyland, of course!) when my eldest was very nearly 3 (free flights – we’re not daft!) and I was rather pregnant with my younger son. I wasn’t much over half way, but I was MASSIVE (he was 9lb 3). My claustrophobia got much worse during that pregnancy. As the weeks went on, I used to feel I couldn’t breathe, and I had to walk outside to take a few deep breaths of fresh air. Possibly because of the size of me and the fact it was a very hot summer (remember those?), I really couldn’t breathe very well.

But it was OK. Because I didn’t need to trap myself in a big metal cylinder in the sky. Or anything else, really. 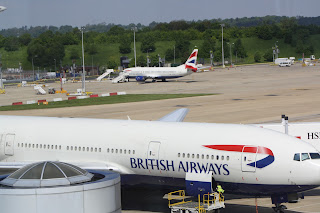 Until the day when my sister-in-law announced she was getting married in Italy. You can read about that here  and here if you fancy a laugh. The whole thing was pretty much disastrous. Anyway, I digress. We considered driving, but in hindsight, it was a blimmin’ good job we didn’t (you need to look back on those old posts to really appreciate how crap it all was). We had to fly.

The thought of it made me panic. Not a proper panic attack, but my breathing changed and I had images in my head of me unable to get on a plane and totally freaking out. I could really feel the fear and the trip was months away.

Clearly, this needed addressing. A quick search online revealed that Paul McKenna had a hypnosis programme for claustrophobia. So we downloaded it and I started to hypnotise myself. And I genuinely believe it worked. I also had a low dose of diazepam from the doctor to just take the edge off my fear.

We’ve just got back from Barcelona and, in the run-up to our trip, I did it all again. Even three years later, I think I was feeling the effects of my earlier hypnosis. I couldn’t conjure up the same fear and vivid pictures in my head as I could do before I flew to Italy.

You need to do the hypnosis (or ‘mind programming technique’) every day for two weeks. You just lie down, relax and listen. He asks you to count down and to visualise certain things, but if you drift off it doesn’t matter, the subliminal messages are still getting to your brain. It is a weird feeling, but strangely enjoyable. Relaxing is not one of my strong points, in fact I don’t even LIKE relaxing (weird, I know), but it seemed to work. At the end he counts down and you just come back to life. It is quite remarkable.

There are also three little exercises to practice, so you can use them if you start to panic – breathing, acupuncture (you just tap different parts of your body) and a visualisation one. I struggle with the visualisation, but the tapping works brilliantly and the breathing is pretty good too. I downloaded the programme onto my phone in case I needed it for the flight and also wrote down the order of the tapping exercise so I could access it quickly if needed. And I didn’t need either of them!

The good news is, it really works! It’s a bit of a time commitment, but well worth it for me to arrive at the airport, get on a plane and get through a two hour flight happily and confidently. The only time I felt vaguely anxious was when I was in my seat, the plane was still on the ground and people were clogging up the aisle as they made their way to their seats. I felt trapped by them, but it soon passed. I even managed to use the toilet on the plane without worrying! 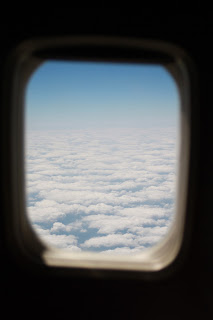 As an aside, the hypnosis seems to also help my general wellbeing. I usually feel a little bit stressed, worried or angry (sometimes all three!) most of the time. Yet after doing the mind programming just once, my mood had noticeably lightened and relaxed.

This is an unsponsored post. I am writing about it because it has genuinely worked for me. I hope it can work for others too.