Anyone whose read my blog more than a handful of times will know a couple of basic facts about us a) two of my kids are REALLY fussy eaters and b) I’m a crap cook.

Everything I make ends up burnt and setting the smoke alarm off (I don’t need to test it weekly, that’s for sure!). My own food is based largely on Dolmio and my kids’ food mainly comes out of the freezer and goes into the oven. Then comes back out burnt. I really am rubbish.

My kids’ absolute favourite meal is pizza and some sort of frozen potato product. So when McCain got in touch to ask if we’d like some of their fries – and to try to make some simple pizzas – it was like a dream come true. Even better, my younger son had to make pizza for his homework anyway! Win-win.

The lovely people at McCain sent us a big bag of Crispy French Fries and all the ingredients to make some pitta pizzas with a variety of toppings: 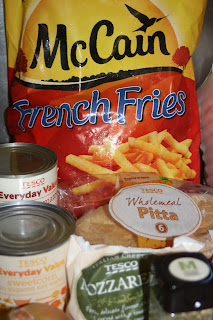 As the pizzas are only small, everyone could choose their own toppings, which is great for the less fussy members of the family. My poor younger son likes most foods, but is often restricted to eating what his fussy brother and sister will eat.

McCain sent us a very easy to follow recipe, which I was confident even I could do. But the kids took one look at it and still declared ‘I think Daddy should do it’. Cheeky monkeys!

Actually, we did it together. All five of us. Now I know this is normal for a lot of families, but it’s a really big deal for us.

We had to grill the pittas and put a bit of olive oil on them. We made the sauce ourselves by frying the onion, then adding a clove of crushed garlic and the herbs, as well as the tin of tomatoes. It took about 20 minutes for the sauce to thicken, ready to go on the pizzas.

The only place we went wrong was slightly burning the pittas as we were grilling them. Yes, we set the smoke alarm off, but it wasn’t disastrous.

We all had different toppings:

Then we cooked the pizzas in the oven for about seven minutes and ate them with delicious McCain fries. 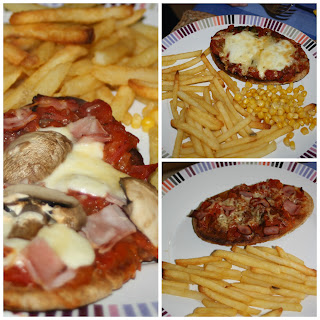 I’m not exaggerating when I say it was the nicest meal I’d had in AGES. We will definitely be making it again. It was so easy and everyone enjoyed doing it – as well as eating them.

It has also inspired us to think about cooking properly more regularly.

We received a bag of McCain Crispy Frency Fries and all the ingredients to make our pizzas, as well as the recipe from McCain. All opinions are our own. Recipe courtesy of www.mccain.co.uk