What she wore – spring shorts

Home » What She Wore » What she wore – spring shorts

This outfit really sums up my daughter right now. She is growing up and her style is becoming just that little bit more mature, but she still doesn’t dress like a teenager. And she won’t dress like one until she is one! Or at least until she’s at secondary school.

She loves to wear denim shorts over leggings or tights. These shorts are from Next and so are the leggings. The leggings came in a three pack – purple, orange and light grey. They all suit her and all seem to go well with everything and she isn’t fussy about which ones she wears.

She’s wearing her Lelli Kellys here, but this outfit works just as well with her Clarks pink brogues or her brown Clarks winter boots. 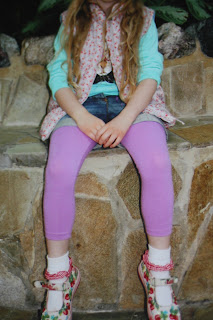 The gilet is from M&S. She got it nearly a year ago and has worn it loads. It is really hard-working and goes with everything and can be worn pretty much all year round. The only time she doesn’t wear it is on very cold days or in the rain as it hasn’t got a hood (or sleeves, of course!). 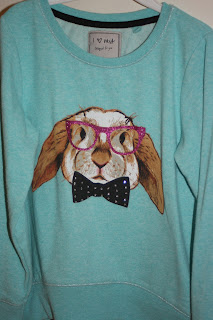 We both love the Next jumper, which is cute and funny at the same time. I have one myself (in light grey) and was very excited when they brought out a children’s version. My daughter loves it so much she wore it for three consecutive days on holiday in Center Parcs last year. She would have worn it every day, if we hadn’t stopped her!
I love that there are so many clothes around featuring characters in glasses at the moment. My daughter has worn glasses since she was 3, so she really relates to these characters and it’s positive for her for other people to see glasses as cool.﻿
﻿