One Good Turn by Kate Atkinson

One Good Turn is the second of Kate Atkinson’s Jackson Brodie crime novels and is the third one I’ve read. I absolutely love them. They are so BRITISH.

Yes, the things that happen are nearly as outrageous as any Patricia Cornwell novel but the dialogue is down-to-earth and the settings are rainy and cold.

One Good Turn is set in Edinburgh during the festival. The streets are packed when a particularly nasy road rage incident takes place. An awful lot of people witness the incident. They are all connected in ways we don’t really understand until the end of the book. There is even a twist in the final sentence which took me quite by surprise. 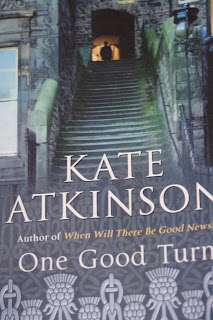 Apart from Jackson Brodie and his girlfriend Julia, there is a middle-aged author, a rather irritating comedian, a dodgy builder and his wife, an unidentifiable man with a gun in his bag and a mysterious firm of Eastern European cleaning ladies. Or are they prositutes? Or both?

The novel is set over the course of just four days with rather a large body count. Over that short period of time, Jackson Brodie ends up in court himself for a crime he didn’t commit and has time for some sexual tension with a single-mum police officer on the case.

I really enjoyed this book and would recommend it to anyone, not just fans of crime fiction.