My daughter has been obsesssed with shoes since her very first pair. A girl of few words, aged 14 months, she looked at those pink size 3s and said ‘oos’ with the biggest smile on her face. From that moment onwards, her face has always lit up at the sight of shoes.

At the age of about 18 months, she spotted a beautiful sight in a shoe shop window. It was a very sparkly sight. And she wanted it. Lelli Kellys. She couldn’t get enough of looking at Lelli Kellys in all their colourful, sparkly loveliness. We didn’t get her any, though. They were very expensive, we were short of cash and her feet were growing like nobody’s business (she went from a 3 to a 7 in just a year).

But the obsession continued. And we softened. Was it really so bad to buy a pair for the little girl who wanted those sparkly shoes more than anything? So for her 3rd birthday, we used Grandma’s birthday money to buy her a pair of Lelli Kellys. They were colourful with big, sparkly crystals on them. And, remarkably, they lasted a year.

I grew to love Lelli Kellys. Yes, they’re girly and sparkly and expensive. But they’re also hardwearing and practical. They’re good for running and climbing trees, while also looking pretty. And if they get muddy, they go in the washing machine. 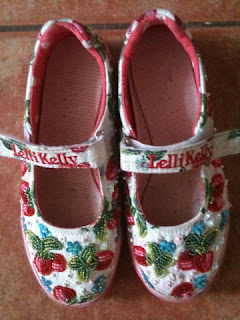 And so to her 7th birthday. Somehow I felt this would be our last pair of Lelli Kellys. We went to the shoe shop. There were four pairs to choose from. They were a bit TOO sparkly, a bit too tacky, a bit too babyish.
‘I don’t like any of them,’ she said.
The time had come. She was moving on and growing up.
So she looked around for an alternative. She tried on a pair of floral Joules pumps with ribbons instead of laces and a pair of pink, Converse pumps. The Converse pumps looked gorgeous AND cool. I hoped she would choose them, although I wouldn’t try to influence her decision. They were such a massive change from Lelli Kellys, not really cute or girly at all.
And she chose them! My little girl is all cool and grown up. Oh, and I don’t want to create a littl mini-me (honest!), but they are just like Mummy’s. 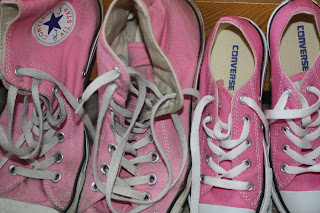