I love the way small children are so obsessed by a particular colour. For little ones, their favourite colour is a very important part of what defines them. And so it was for us with yellow for my younger son and pink for my daughter. Those colours are still a big part of who they are today. But RED?!

When I saw that this week’s Gallery theme was red, my heart sank a little. What could I write about RED?!

Well, my kids are all Man Utd fans (yes, we’re southerners, but my husband isn’t, so it is ‘allowed’) and the boys play rugby in red, but is that really enough? Could I really write a whole blogpost on that?

But then it dawned on me. What a fool I’d been!

Because red has been a huge part of our lives five days a week, 39 weeks a year for as many as three family members at a time for the last seven and a half years. Yes, our primary school uniform is red:

And then two and a half years ago we added some new things to the list: 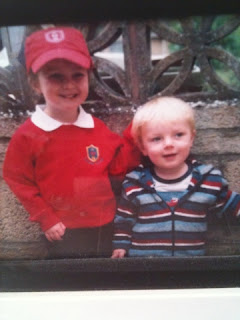 My eldest’s first day at school 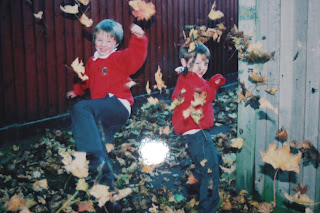 The boys kicking up the leaves in their uniforms soon after my younger son started school
Linking in with The Gallery over at Sticky Fingers. Go on over to see how other people have interpreted the theme ‘red’.