The kids went back to school after half-term today, so that’s all the childcare issues sorted then? Well, no, not really. For starters, only two of the kids went back. I’ve realised one of the downsides of having a child at secondary school – different schools mean different inset days. And my son’s school had an inset day today. And we didn’t exactly notice that until very recently…

My mum and dad are great and have the kids before and after school on Tuesdays and Wednesdays, but childcare issues just keep popping up. And my mum and dad already do enough. I hate having to ask them to do more, but so often it feels like I have no choice. In the space of just over a week we have no less than FIVE childcare issues.

On Saturday my husband and I went out for a late Valentine’s night out. It was also our first night out together since my birthday in September. We decided to go for a quick, early meal and then to the cinema. My mum and dad agreed to babysit, so that was all good. But then I noticed the swimming party my daughter had been invited to – 6-7pm. That’s until 7pm in the water. She won’t be ready to come home until 7.20 and our table is booked for 7.30. So I have to get my dad to pick her up from the party while my mum looks after the boys. 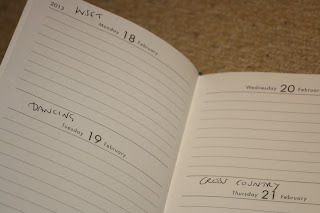 Then there’s today. The dreaded inset day. My husband said he could have my son in the morning, but had to be in work for a meeting at 12.30. I only work until 1.45, so would be home about 2.30, but that’s still over two hours with no-one to look after my son. My mum and dad would do it, surely? No, they were going out. Luckily my sister is on maternity leave and was happy to have someone to help entertain his baby cousin for a couple of hours until I get home. Crisis averted.

On Tuesday night my husband is working late. And I have dance class. Generally he tries to avoid working late on Tuesdays, but it happens sometimes. So I’m going to have to ask my mum and dad for ANOTHER favour.

On Thursday my younger son is representing his school at cross country for the first time, which is pretty exciting. Unfortunately it’s at another school on the other side of town and he has to be transported by a parent. And it’s between 4 and 5. And my daughter’s dance class is 4.15 until 5. On this occassion his friend’s mum will take them to cross country, then next time they run – in two weeks – I will take them and my mum will have to take my daughter to dancing.

And finally… On Sunday my younger son is playing in his county cup rugby competition, which is the highlight of the rugby season. We will both want to be there cheering him on. The county cup is in the next town and we will need to be there pretty early. But my eldest is taking part in a Scout event the same day which is closer to home and a slightly later start. And an earlier finish.

Frankly I don’t even have the strength to start working that one out right now.