As the proud owner of two boys, you might imagine I would have been very pleased to see this week’s Gallery theme was boys, but actually my heart sank a little bit. Because I’ve written about my boys A LOT over the last 18 months, including two very recent posts – on the bond between my boys and about boys just being boys Add to this my promise to myself and to my family that I wouldn’t use recognisable photos of them and I was left with a problem.

What could I write? Which photos could I use?

Then I thought back to a very special time with my boys and I thought I could write about that.

We moved into our house on 21st December 2004. My boys were (very nearly) 3 and a half and 14 months. It was my eldest’s last few months before he started school. Looking back, the spring that followed was a lovely time. 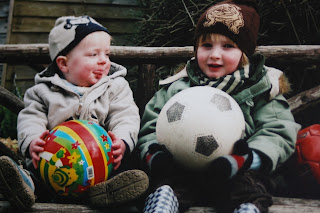 In the garden soon after we moved in

My boys were so young and innocent and cute. But they were old enough to be fun and to enjoy each other’s company. 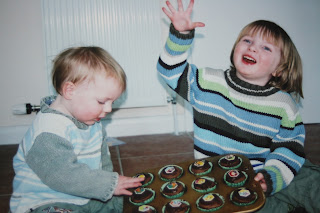 My next door neighbour had two little dogs. The boys would stand on the windowsill for hours craning their necks to see those dogs. I had to hold my little one up – he wasn’t big enough or strong enough to be left standing on a windowsill. The little dogs would stand at their window and the boys would watch them. Yes, they were effectively staring straight into my neighbour’s house, but they were only tiny boys and my neighbour didn’t mind. 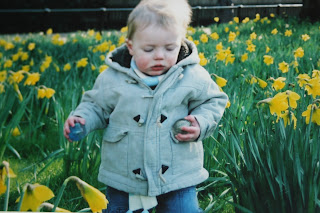 Two bouncy balls in his hands!

Around March 2005 we noticed my baby boy had a couple of spots. Chicken pox. The next day his brother had some too. We were outcasts from society. They couldn’t go to nursery or playgroup. They just had to stay at home with their mummy. And I loved it. They weren’t ill with it at all and they both only had a handful of spots, so we went to the park and played with wooden trains.

My younger son was already obsessed with kicking balls around and his face lit up at the sight of one. My eldest loved trains and had a big wooden train set – first an Early Learning Centre one which gradually got overtaken by more and more Thomas trains and accessories. They had hours of fun with those trains. 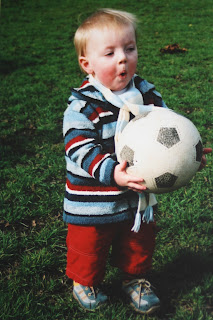 At the park with his football when he had chicken pox

When I took them out it was buggy and buggy board. I loved pushing my two little boys around and felt so proud of them. They were little individuals. They were free spirits. They were my boys.

On 26th July 2005, after a week of mummy feeling distinctly under the weather, everything changed. It wasn’t going to be two little boys on their own any more. We were about to say goodbye to our life made up exclusively of boys, footballs and wooden trains, goodbye to our buggy and buggy board. Mummy was pregnant. It was time to say hello Phil & Ted’s, hello baby sister. 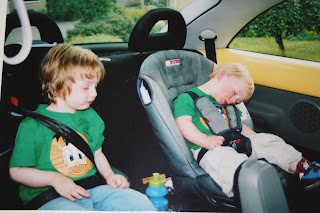 Asleep in the car days before we found out everything was going to change
This post was written in response to a prompt from The Gallery over at Sticky Fingers. Pop over to see how other people have interpreted the theme of boys.