No one likes a skinny, sober bitch

Home » Photo Linkies » No one likes a skinny, sober bitch

Checking out Facebook on new year’s day, I found this little gem on one of those ‘amusing’ pictures people like to post: My New Year’s resolution is to stop kidding myself that I’ll make a lifestyle change this year. No one likes a skinny, sober bitch anyway.

A few people had ‘liked’ it, but not me. Because I’m a skinny teetotaller and I took offence. Why is it acceptable to have a go at people who are thin and don’t drink?

Imagine if the boot were on the other foot? What if I had posted No-one likes a pissed-up, fat bitch?

It would be totally unacceptable of course, but is it any different from having a go at the skinny people? Having a go at me? No, it isn’t.

It’s the no one likes part that gets to me most because it plays on my insecurities. I have friends, but I’m not the most popular person in the world. It makes me wonder do people not like me because I’m thin?

Being thin goes against female and particularly mum solidarity. Would people like me more if I was a more socially acceptable 12 or 14? Or if I was fat? Do people look at me and think they don’t want to talk to me or be my friend because I’m thin?

Do they like me less because I’m naturally thin and eat a lot? Would they like me more or less if I worked my arse off or starved myself to keep myself this size? Or do they think I work my arse off because they see me running?

Am I reading too much into one frivolous picture with a throwaway caption? Almost certainly. But these things can do damage. To people’s self-esteem and mental health. And I haven’t even started on the ‘sober’ aspect yet.

I don’t drink. I am a life-long teetotaller. To me it is the most normal thing in the world because I don’t know any other way. But to the rest of the world it marks me out as a bit weird. Possibly no fun.

I don’t do that, so it’s another reason why people might want to avoid me. Thin, don’t drink, no fun. Who would want to be my friend?

No-one apparently. Because no one likes a skinny, sober bitch. (The grammatical error is direct from the original picture and absolutely nothing to do with me.)

I like to think I’m a fairly nice person, but I realise I’m not everyone’s cup of tea. People can like me or dislike me, but I want them to judge me not on the basis of my size or what I choose to consume, but on my personality.

So have a think about that before you share an ‘amusing’ picture with a wide audience. Not everyone will complain about it loudly, some people will turn on themselves and do themselves some damage. 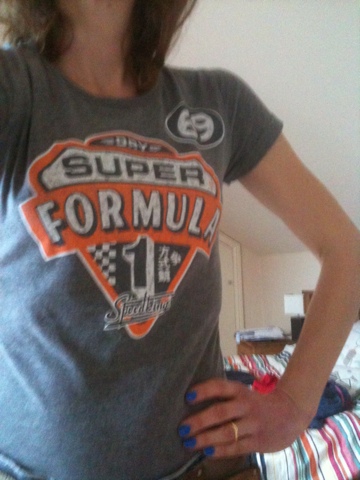 This is my skinny, 39 year old, post three kids body today. My ribs stick out further than my boobs