Home » Family » The early-ization of Christmas

I am resisting the early-ization of Christmas. (Yes, I did make that word up. I couldn’t think of the proper one and I didn’t even know if there was one, so I made one up.)

There was a time, only a few short years ago, when to have your tree up on 1st December was chav in the extreme. Now it is not only not-chav, it is positively normal. Any true self-respecting chav worth their chav salt has to aim much higher these days. 19th November or you are NO-ONE. Ostracised from the chav community.

The town Christmas lights used to be switched on in the last week of November. Now that has moved to the weekend before that. Which is basically the MIDDLE OF NOVEMBER. Six whole weeks before Christmas. By the time we actually get to Christmas, the lights are boring. Old hat. They have quite literally lost their sparkle.

I had a friend whose tree went up on 6th December to coincide with her birthday and that was WEIRD. When he had his own house, my brother started putting his tree up on 9th December. Too early.

I thought we were being daring because we put our tree up two weeks before Christmas. So it varies between about 11th or 12th at the earliest or as late as 16th or 17th. I thought it was normal, but it isn’t any more.

In households across Britain, Christmas now starts on 1st December. I can’t believe people aren’t fed up of the sight of their Christmas tree by the big day. And desperate to have that little bit of their lounge back which has been taken over by a massive piece of greenery adorned with sparkly bits. And if it’s real, surely there must be more needles on the carpet than the tree by the time all the doors on the Advent calendar have been opened?!

I first posted this a year ago. It got five whole views. Apologies if you were one of those five brilliant people. 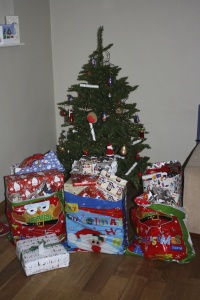