Throughout the last few days with my ill family – you can read about that here here and here – one little person has kept me calm and sane and happy (at least some of the time). My little girl has been a little ray of sunshine.

After hours surrounded by illness and medicines, topping up drinks, taking temperatures and clearing away tissues, my girl was a little oasis of calm.

Ever since it became clear that this illness was more than a one-off, my main aim (apart from caring for the poorly ones) has been to keep my little girl well. So she’s been kept segregated from them, away from everything and everyone she loves.

She loves nothing more than to sit with her Daddy and watch the telly. Or, failing that, to sit watching telly without her Daddy. The telly, her Daddy and her poorly brothers are all holed up in the lounge – Daddy is there 24 hours a day. She is not allowed in the lounge.

On Christmas day, my husband was kind enough to suggest my daughter and I go to my mum’s house as planned so our Christmas wasn’t ruined quite as badly as it might have been. I popped in and out of home all day, while my daughter stayed at my mum’s. With no brothers to suppress her and the undivided attention of her Mummy and Grandma and Grandpa, with two sets of uncles and aunties dropping by, she positively glowed. She was happy and funny and clever, with everyone hanging on her every word and admiring her every move. She couldn’t have her telly or her Christmas toys, but she had love and care and attention.

Several days on, nothing has changed. She gets up in the morning, has her breakfast in my bedroom (which is as far away from the lounge and the germs as it’s possible to get) and then she goes round to my mum’s house. She eats her meals there, she has even had a bath there. She gets to do colouring and craft with the help of my mum and dad and she gets to choose what she watches on telly (although sadly no access to a Wii for the still-unwrapped Just Dance 4 or her beloved stock of recorded programmes).

She chooses what she eats and when, she drinks J20 from a wine glass and she waits for Mummy to call round to spend some time with her or take her for a walk.

When I see her she bounces around and gives me a big hug and does some dancing. It is such a contrast to the rest of the family, occupying a seat each in the loung, wearing pyjamas and surrounded by duvets, pillows and cushions. I feel myself de-stress when I see her. She really is a delight to be around.

On Boxing Day, she suggested she sleep in my bed to stay away from the germs – her bedroom is next to the lounge and she sleeps with the door open as she doesn’t like the dark. I’d considered this myself, but my main concern was that if either of us fell ill in the night, the other would be certain to get it. But she moved in and it’s been fine. 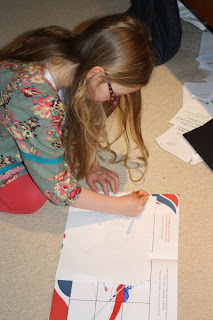 Daddy his own pillow downstairs, so she’s brought her pink little girl’s pillow with her. Her pyjamas, dressing gown and warm socks live on the bed. Colouring books, sticker books and Moshi Monsters pen sets have moved in. It’s becoming a little retreat for both of us. Sometimes she will just sit there on her own and sing – songs from her nativity or Ye cannae shove yer granny off a bus (?!). She found a ribbon off a Christmas present and spent ages choreographing herself a rhythmic gymnastics routine in front of the mirror.

We sat in my bed together and watched the dancing dogs programme on ITV – the only Christmas programme I’ve managed to watch due to the main television being ‘out of action’. It’s such a pleasure to wake up in the night (or the morning) and see her little pink cheeks on the pillow next to me. 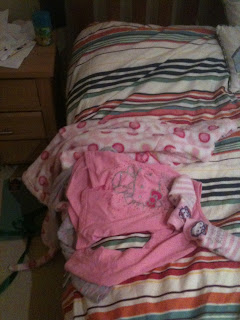 In its own way, this illness has hit her too, but she has adapted. She has been my little ray of sunshine.

I wrote this a couple of days ago, while my family was still ill. I’m pleased to say that they are now almost better and my daughter has her Daddy, her brothers, her own bed and her telly back.