I’m the mum that trails kids with me. Everywhere we go. Three kids. Moaning, arguing, slowing me down. I don’t have a husband always sat at home and I don’t have a brilliant reciprocal arrangement with a friend where one takes the other’s child to Cubs and the first one takes the second one’s to ballet.

It’s just me on my own with three kids. Backwards and forwards. To ballet. To Cubs. To Scouts. To street dance. To Rainbows.

Some places we walk, some places we go in the car. But either way, it’s far slower with all of the kids than it would be on my own.

As an added ‘bonus’, the boys like to draw attention to themselves. So if we’re at one of my daughter’s activities, they show themselves up. They’ll go running into the studio where she does her street dance and go sliding across the floor on their knees. They’ll argue outside Rainbows and deface the all-important parent rota sheet. They’ll come charging into the waiting room outside ballet, full of private school kid parents, brandishing a large stick, shouting and diving on top of each other.

But then something changed. I didn’t see it coming, I didn’t know we were ready for it. Then all of a sudden, we were.

One day, I just left my eldest at home when I went to pick his sister up from dance.

Everything was calmer, quieter, easier and quicker without him.

A couple of weeks later, it was time to take my younger son to Cubs, but my daughter was messing about in the toilet. So I left her at home with her brother.

After just a few weeks, it’s become the norm. I don’t take the boys with me to drop my daughter at Rainbows or dancing and I don’t take my eldest to drop his brother at Cubs.

I’m only gone 10 or 15 minutes and I leave them locked in, with a key to get out if they need to. They know they can phone me and they know they’re not to answer the door or the phone.

Sadly, I haven’t felt brave enough to leave them for ballet yet. We sit outside the lesson for half an hour, so are out of the house around 45-50 minutes. This is too long at the moment, so I will have to put up with the stick-waving for a few more months.

It’s such a small thing, but it’s another welcome step towards them growing up and a little weight off my mind, a little bit less pressure. 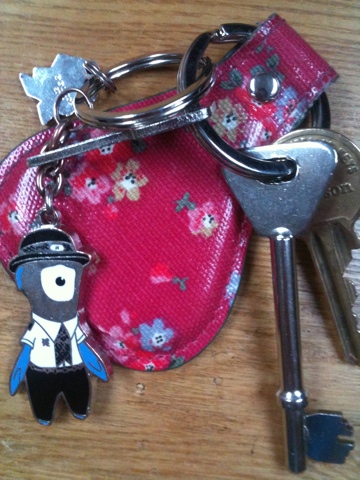