I’ve been asked by that lovely Sonya Cisco to write about some things that wind me up, annoy me, get on my goat. We’re not talking atrocities by one nation against another here or even the state of the economy. We’re talking about the small stuff. The pet hates.

So here are some things that really get my goat.

Wrappers in pockets. Which end up in the washing machine. Penguins, Mars bars, Haribo, Crunchie, chocolate buttons… They all end up in my washing machine. And there’s only one person who puts them there. My eldest son. He changes his jeans fairly often, yet somehow there is always a minimum of six wrappers in there. Once he even put an iPod Shuffle in there. Needless to say, it didn’t make it out alive. 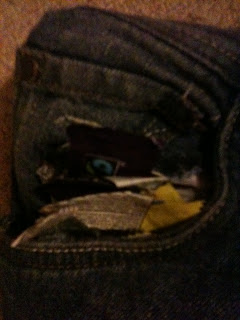 Spilt milk. Don’t cry over spilt milk… They say this for a reason because, actually, I’ve been on the brink of tears about it a number of times. When you’re in a hurry in the morning, it’s really the last thing you need. The worst is a leakage in the fridge. Oh my flipping word. That REALLY upsets me.

On the whole I’m afraid to say the main culprit is, once again, my eldest. It’s like we’re waging a war of attrition over his breakfast. He doesn’t like making it. Does he think if he spills the milk EVERY SINGLE DAY I will cave in and just do it for him? Sometimes he leaves it for me to clean, sometimes he makes a vague effort to do it himself and sometimes it goes un-noticed for a few days. UNTIL I SMELL IT. And then I’m really unhappy.

Soft fruit. I love fruit. I eat a lot of it. But I’m rather particular about it. I can’t bear an apple that’s gone a bit soft, got a litte bit of broken skin or is, God forbid, BRUISED. And I really, really can’t stand horrible squashy grapes. You know how Tesco deliveries ‘pick you the food you’d choose yourself’? They don’t. Because I have really high standards with my grapes and spend some time inspecting them. Approximately once every two months I am forced to phone Tesco to complain about my grapes and get a refund. And, fair play to them, they always give it. And they don’t point out that I only asked for a refund for grapes six weeks ago.

Bedtimes. Specifically the fact that the kids don’t think they have one. I can have them in their rooms at 8.30, but they will still be in and out until 10pm with absolutely no regard for their bedtime whatsoever. But by about 8.30 (to be honest, sometimes earlier), I’m ready to have some time without them.

So now to ask some others what irks them, what drives them up the wall, what gets their goat.

So what gets on your nerves?